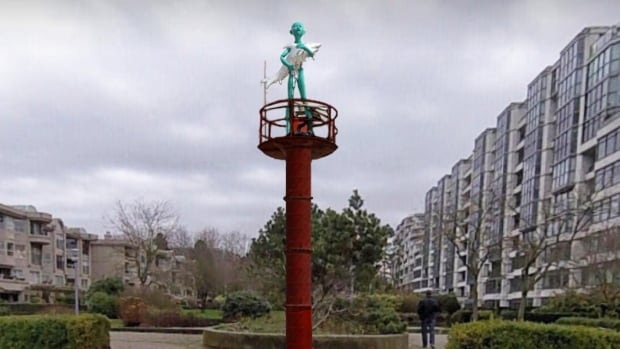 Would you like this sculpture in your neighborhood? Public artwork attracts criticism from some Vancouverites

The sculpture depicts a distraught young boy standing atop a red tower with a melting shark in his arms, a visual warning of rising sea levels and the destruction they could cause.

But for some residents of Vancouver’s southern edge of False Creek, the proposed 7.8-meter-tall sculpture, which will be set up temporarily amid manicured lawns and waterfront residences, is a flaw.

“Do I think the art is suitable for this location? No,” said Maggie Rayner, a resident of a nearby apartment building, as she walked past the site on Sunday afternoon.

“I don’t think it’s appropriate, the scale of space.”

These comments were echoed by a group of residents who put up a protest sign at the proposed site, a small raised park space bordering the bike path near Stamps Landing.

The disapproval led to a online petition with over 1000 signatures.

In question, the height of the sculpture, its proximity to the neighbors and the pedestrian traffic that it could attract in the middle of a very busy cycle path.

“This will cloud opinions, which will affect property values ​​and ability to sell,” wrote MC Marciniak, one of the petitioners, in the comments.

The sculpture, titled Boy holding a shark, is part of the Vancouver Biennale, a public art exhibition that takes place every two years.

It is the creation of Chinese artist Chen Wenling, who unveiled earlier this year Proud youth, a towering red statue of a laughing boy at the north end of False Creek that elicited a similarly polarized response.

Chen’s latest work is a “reflection on the growing tension between humans and the ocean,” according to one the description on the biennial website.

“It’s a warning that the destruction of nature will eventually thwart humanity itself. The artist hopes to raise concerns about environmental issues through the power of art and inspire change in the global community.”

The sculpture ‘captures the discussion’

Barrie Mowatt, the founder and artistic director of the Vancouver Biennale, said on Sunday that public art criticism is not unusual.

He pointed to previous biennial installations that have since revitalized public spaces, such as the giant laughing statues at English Bay.

Other developers’ installations, such as the $ 4.8 million chandelier under Vancouver’s Granville Bridge, have undergo a similar review after their unveiling.

But Mowatt noted that the sculpture’s flashback had “created a conversation far ahead of normal.”

Part of this came after the organizers of the biennale alerted residents within a two-block radius of the incoming sculpture, which Mowatt said has already received engineering clearance.

He said disinformation had since circulated about the height of the sculpture, with a sign at the site saying it would be 8.5 meters high. He said the base will be 4.8 meters high, while the boy himself will add an additional three meters.

Disturbing discussions about the artist’s ethnicity also crept into the dialogue, Mowatt said, with some questioning the decision to commission pieces from a Chinese artist.

“These kinds of statements at a time we live in today are quite worrying,” he said, referring to the rise in anti-Asian hatred during the pandemic.

Mowatt noted that he has also received positive feedback on the artwork and expects safety concerns can be addressed with clear signs on the bike path for cyclists to slow down.

“I think it’s a pretty appealing piece in its thinness and really captures the discussion we want to have,” he said.

The City of Vancouver is accepting comments on the sculpture until Monday. Mowatt said the goal is to have the room installed by the third week of June.