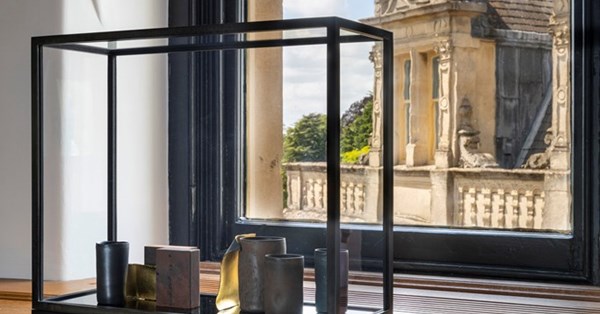 EDMUND DE WAAL’s installation in Waddesdon is his second exhibition in the Rothschild country house, built in the style of an 18th century castle nestled in the Chilterns. The potter’s first exhibition at the Manoir in 2012 comes two years after the literary success of The hare with amber eyeswhich tells the story of the rise and near destruction of de Waal’s Jewish ancestors, the Ephrussi family, patrons of art in Belle Epoque Paris.

In the first exhibition, de Waal’s porcelain pots were placed in the opulent rooms of Waddesdon without moving any existing furniture or objects. The artist said he would be happy if visitors walked through the rooms, admiring English paintings, French armchairs and Sevres porcelain, barely registering his white cylindrical pots.

De Waal, famous for his fascination with a white, minimalist approach and for having a Donald Judd chair in his studio, used gold, very subtly, for the first time in the 2012 show. new materials,” said Juliet Carey, the mansion’s senior curator. While the 2012 exhibition was a personal intervention by the artist, reflecting shared histories and family ties, including intermarriage between the Ephrussis and the Rothschilds, the current exhibition does something new with existing pieces. .

Organized by the artist himself, “We Live Here, Forever Taking Leave”, with its themes of diaspora and exile, quickly emerged after a lunch with Jacob and Hannah Rothschild. The two biggest pieces, Sukkah and Psalm IVstopover before settling into their final home in Jerusalem, when the new National Library of Israel opens. Sukkah was originally made for a 16th century synagogue in the Venice ghetto, placed in the upper room where Sukkot, the feast of tabernacles, was celebrated. It was also shown in the crypt of Canterbury Cathedral, in the city where de Waal was trained as a potter.

The piece is an arrangement of towering gray and white porcelain vessels, held in thin, angular cases of varying heights, reminiscent of the skyline of a skyscraper. A thick plexiglass platform allows the entire structure to float above its support. Light and shadow enter the work from all directions, with gold leaf leaning beside some vessels, further dispersing the patterns of light and reflection. “My Sukkah is an installation of imposing vessels held in a sort of sanctuary of towers. It floats like all remembered cities should float.

Venice Ghetto, Sukkah original settlement site, is the oldest ghetto in the world. De Waal added that he wanted to present a reading of the ghetto far from being solely a matter of oppression and marginalization, and claim its history as a place of creativity, conversation, knowledge and music.

Psalm IV was presented for the first time in Venice as part of the artist’s Library of Exile, a 2000-volume collection of books written far from the authors’ birthplaces, often not in their mother tongue. The artist’s intention was to create a new library in memory of all the libraries that were deliberately destroyed, from Nineveh to the 1938 Nazi destruction of his grandfather’s library in Vienna. A flat panel of oak coated with kaolin, the material that makes porcelain white, inscribed with the word “exile”, refers to the larger work.

Psalm IV 44 porcelain vessels, 16 blocks of marble and alabaster, interspersed with eight steel supports and five steel boxes, hang on the wall in a pale showcase with slender frames. Light bounces off objects within their groupings, creating different dances of light and shadow, depending on the time of day. The artist says that the interplay of light and reflection reflects the call and response structure of the Psalms. And a plain white room seems the perfect place to contemplate Psalm IV contrast between the passing glory of worldly achievement and repentance as the path to God’s favor. The seventh verse of the psalm is part of the prayer for sustenance recited on the Jewish high holy days: “You have brought joy into my heart, more than in the time when their corn and their wine increased.”

The share of shadows in the extension and redefinition of a work can be seen in door in the dark, a wall-mounted horizontal composition of five dark cases containing gray porcelain vessels, blocks of black marble and five gilt tiles, three in relief with text. Shadow extends the composition both between the windows and along the wall.

Partially obscured text shines behind the vessels, suggesting the eloquence of writing and artistry to reveal truth even in the most difficult times. Visitors wishing to travel back in time Sukkah and Psalm IV the future permanent home can see a model of the new National Library of Israel on the first floor. The works will be in the library foyer, ushering in a new chapter.