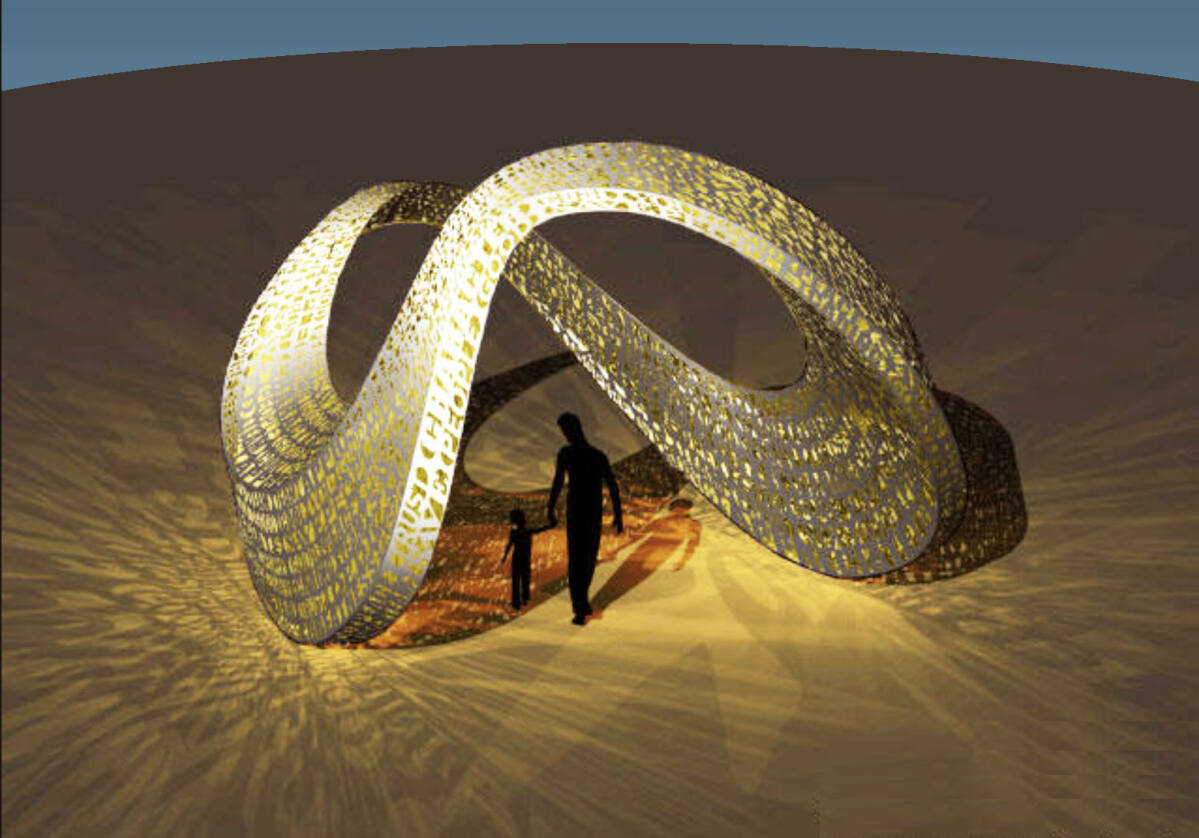 “UNUM” is the name of Blessing Hancock’s signature artwork that has been approved as a permanent public artwork to be placed in the Courthouse Square. The play emphasizes innovation, diversity and commitment as core values ​​of Santa Rosa. Hancock describes UNUM as a volumetric shape of stainless steel that will feature custom waterjet-cut text and be illuminated by LED lights from the inside.

An eight-person selection committee, formed in early 2020, narrowed the field of 148 nominations from artists across the country, including 60 from California and 14 from Sonoma County, to five finalists who then submitted full proposals. These five proposals were made public and comments were gathered through a survey administered by the city. The final recommendation came after the initial five finalists were reduced to two proposals. While all of the submissions were artistically excellent, the solid opportunity for increased community engagement to determine Unum’s text helped make it a favorite. Additionally, multiple languages ​​can be incorporated to better represent the diversity of Santa Rosa. At a special meeting on December 14, the seven members of the Art in Public Places Committee (AIPP) unanimously approved the recommendation. “Unum will bring the community together,” said AIPP Committee Chair Lisa Puentes, “not only through the process of generating words incorporated into the design, but as a gathering place, a beacon to connect with one another. others. “

Next steps include engaging the community ahead of its fabrication, which will take most of the year for UNUM’s scheduled installation in February 2022. For more information on Unum, the artist and the process selection, visit: srcity.org/2917

Reverend H Lee Turner, of the Santa Rosa Community Baptist Church, along with Fence at the Top executive director and former NFL player Honor Jackson lead a community group that seeks to renovate and improve MLK Jr. Memorial Park facilities at home the first community center of the African diaspora north of the Golden Gate Bridge.

The group is currently in the process of soliciting funds made available by Proposition 68 – California law on drought, water, parks, climate, coastal protection and outdoor access for all released $ 395.3 million to create new parks and recreation opportunities in underserved communities in California. Keeping an eye out for the March 21, 2021 application deadline, the group has gathered numerous letters of support from elected leaders such as Representative Mike Thompson and Senator CA Mike McGuire, as well as valuable contributions from the community.

The hope is to get the maximum of $ 8.5 million available per applicant and combine it with additional funds to build an outdoor amphitheater, a walking path with exercise equipment, a playground, a fitness facility. Multipurpose indoor recreation including a basketball court, cultural community center and more with an ambitious four-year schedule. The Center would also feature historical placards depicting the history of the African American people and their diaspora, the dispersal of people from their homeland. Are you looking to partner with Department of Recreation and Parks in Santa Rosa, the center would serve everyone in our community.

The center will be named after beloved community leader Reverend James E Coffee (1933 – 2010), who in 1981 along with Carol Ellis and Mary Moore kicked off the very first MLK Jr. Day celebration in Sonoma County which continues to this day.

The Martin Luther King, Jr. Birthday Celebration Committee presents the MLK Jr. 2021 Birthday Celebration online via Zoom, Facebook and YouTube from 7 p.m. to 9 p.m. on Sunday, January 17. It will be open to the public and free to access. For more information visit www.facebook.com/MLKcomité

COMMUNITY CONVERSATIONS ON THE RACE

Well done to the weekly series Community Run Conversations hosted by the Sonoma County Community Action Partnership (CAP). Katie Watts-Whitaker, Head of Marketing and Communications and Marcus Clarke, Head of Fund Development and Communications for CAP began the series on June 15, in response to the murder of Mr. George Floyd. The goal was simple, to create a connection in our community by engaging in transparent, inclusive and public conversations on the topic of race. That first conversation took place with longtime CAP director Vince Harper. His willingness to come first and the trust he places in our community made a perfect start and set the tone for future conversations broadcast on Facebook Live. With each weekly conversation, the panelists began to speak more freely and converse more openly. The CAP team worked hard to create a safe space and gain the trust of a wide range of panelists. When asked what to expect next, Watts-Whitaker noted that the series will continue into 2021 with a slightly changed schedule of two Mondays per month and once COVID security regulations allow it, he might even have a face-to-face community conversation. (continued below advertisement – with video)