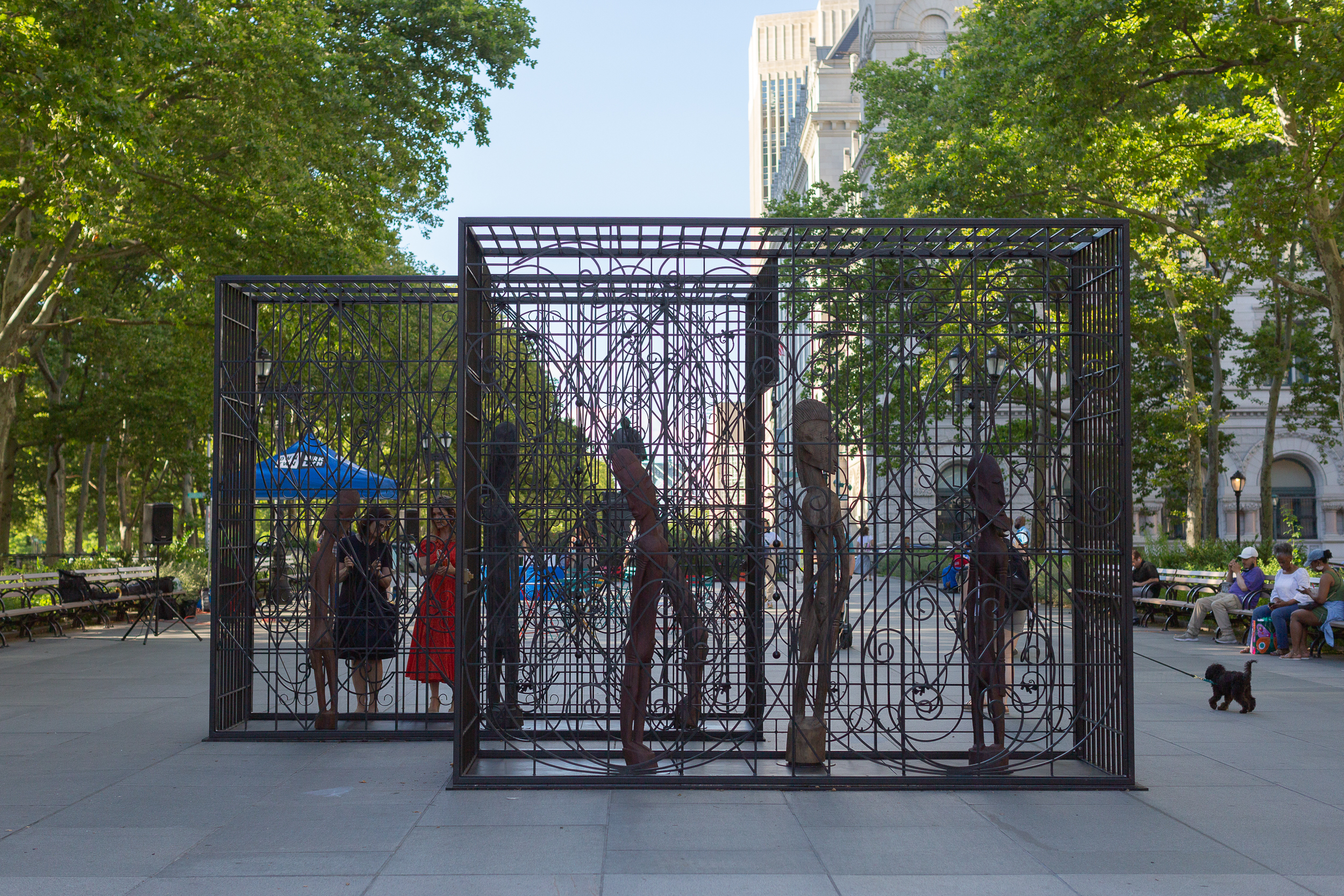 A new large-scale sculpture by Bronx-born conceptual artist Fred Wilson has taken up residence in Brooklyn’s Columbus Park, and there’s a lot to be said for it.

Simply put, Mind-Forged Handcuffs/Hand-Forged Spiritsas the 10-foot-tall public artwork is dubbed, is a metaphor for structural racism and related themes.

Viewers will notice six statues of African figures enclosed in two boxes. According to an official press release, “Ornamental doors serve as a metaphor for structural racism, the incarceration of black men, the detention of illegal immigrants [and] police.”

Although not site-specific, the piece certainly connects and speaks to the various other monuments and buildings that surround it, including a sculpture of Henry Ward Beecher, the 9th-century Congregational minister known for his support of the abolition of slavery, the statue of Christopher Columbus and the Kings County Supreme Court building.

The installation, presented by More Art, is one of the projects funded by the Downtown Brooklyn + Dumbo Art Fund, as part of New York State’s Downtown Revitalization Initiative (DRI).

“Creating spaces in our communities and public parks for such representative and powerful art is important,” Brooklyn Borough President Antonio Reynoso said in an official statement. “While some people prefer to learn their history through stories or lectures and documentaries, creating expressive art allows one to interpret historical facts and their relevance today. Fred Wilson’s sculpture makes exactly that.”

When you stop to view the massive new artwork, we suggest looking at the structure while contemplating a host of questions, including: who are we as a nation and how does history influence the way we are we driving today? What is freedom? Who decides who is worthy?

If you’re looking for even more public art to admire this summer, consider heading to City Hall Park, where seven new giant sculptures have just been installed. Through the end of August, you can also see huge sculptures greeting New Yorkers on Broadway in Times Square as part of a new free exhibit open to the public. While you’re in the neighborhood, head to the subway on 43rd Street to see a new mosaic by artist Nick Cave that was commissioned by the MTA’s Public Arts Program.

And here’s a comprehensive list of the best outdoor art in New York this summer.