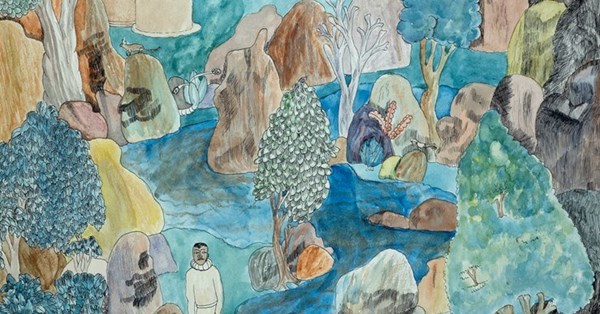 A REVIEW in London calling in 1949 asked how it was that unknown artists, schoolboys of the Cyrene Mission, had drawn so much attention to themselves: their exhibition in the galleries of the Royal Society of Watercolourists was packed for the whole fortnight that it was opened to the public.

“The Stars Shine” shows us what aroused such interest in 1949. Two hundred large paintings, 1200 small paintings, as well as wood carvings and stone carvings, had been brought by the founder of the Cyrene mission, the Canon Edward (“Ned”) Paterson, at the instigation of the Society for the Propagation of the Gospel Abroad. The exhibit then toured England for three years before traveling to Paris and New York, followed by a second exhibition in London in 1953.

Unsold works from these tours were packed up and stored in an annex of St Michael and All Angels, Shoreditch. They remained there, forgotten, until 1978, when the church was deconsecrated with the site and its contents put up for auction. Originally purchased by the London Architectural Salvage and Supply Company, the collection is now in the care of the Belvedere Trust and is on display for the first time in nearly 70 years.

What is it in these works that arouse so much interest? Bright, vibrant colors, fine lines, plus, in Paterson’s words, leaves “piled skyward with every conceivable detail: rocks, trees, animals, villages, and people.” Painted flat, without the use of perspective, these are paintings in which pattern and color predominate so that figurative images are pushed close to the point of abstraction.

Encouraged by Paterson to let their imaginations draw inspiration from the varied surrounding landscape and rich religious and folk practices, Samuel Songo, Kingsley Sambo, Timothy Dhlodhlo and others became the forerunners of modern Zimbabwean art. As students, they and their colleagues captured the diversity of Zimbabwe’s terrain, wildlife, rituals, fables, celebrations, dress and creativity. Dhlodhlo and Songo are among those whose work includes biblical scenes, giving us, respectively, The fish project and The death of Ananias and Sapphira.

Paterson, educated at the Central School of Arts and Crafts, influenced the development of modern art in South Africa and Zimbabwe. Before founding the Cyrene Mission, he spent a year at Grace Dieu, an Anglican secondary school near Pietersburg, where he introduced students in the school’s workshop to bas-relief sculpture. Continued after Paterson’s departure by a nun, Sister Pauline, bas-relief carving became the school’s hallmark style. Ernest Mancoba and Job Kekana, two of South Africa’s first professional black artists, emerged from this workshop.

Last year at St. Mary’s Cathedral in Johannesburg. I saw armorial bearings from Paterson and carvings from Kekana and spoke in a sermon for the cathedral’s 90th anniversary about the impact of missionary art schools, such as Grace Dieu and Rorke’s Drift. Like the Cyrene and Serima missions in Zimbabwe, these provided training for some of South Africa’s early modern artists and supported the use of pre-colonial styles and media.

Nevertheless, there were limits to the styles used due to teachers’ preconceptions and the preferences of predominantly white markets – all within the framework of liberal Victorian values ​​instilled unconsciously through missionary training. The colonial aspects of the Schools of Mission made engagement with these artists and their training complex for those who followed them and will have contributed to a mix of reasons why these works remained unaddressed in a church annex for two decades. . Paterson’s own influence was also challenged, and then replaced, by another pioneering advocate of Zimbabwean artists, Frank McEwan, who founded the National Gallery of Zimbabwe.

Paterson’s vision, influenced by John Ruskin and William Morris, was for the emergence of an indigenous Cyrene Mission style. He spoke of his approach as being “the encouragement of art” by “the absence of teaching”. A former student, Lazarus Khumalo, recalls: “Paterson didn’t tell us what to do. He wanted us to do what we felt. . . He let the imagination run wild. He combined this laissez-faire approach with the absence of any outside examples of art, especially Western art. A distinct Cyrene style can be noted in many of the works shown here. There is some debate about the extent to which this style emerged from his students or reflected the influence of Paterson’s personal preferences.

It is when his students push this common style towards more abstract uses of color and line that the work here becomes most original and anticipates the emergence of modern art in Zimbabwe. Examples include tree flowers by Barnabus Chiponza and The stars are bright by Musa Nyahwa. 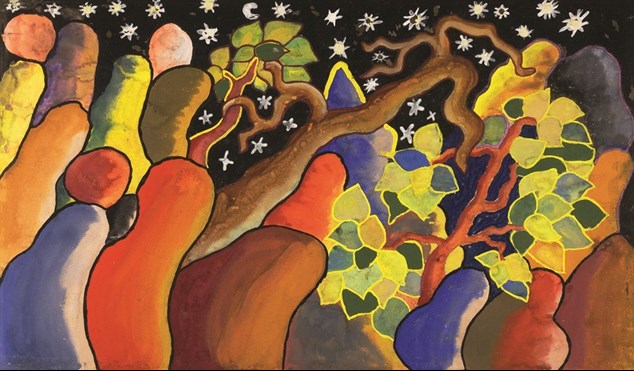 Opened just ten days after the gallery lockdown was lifted, the staging of ‘The Stars are Bright’ at the Theater Green Rooms, Shoreditch reflects the story of these paintings, themselves locked down for 20 years. The Black Lives Matter protests since the death of George Floyd have inspired international awareness of institutional racism during the lockdown. “The Stars are Bright” therefore comes at a critical time to show the work of black artists, past and present, including the history of these African artists and their work.

“The Stars are Bright” sheds a well-deserved light on these young artists and on this vital but contested chapter in the history of African art. The recovery and display of this collection also raises the question of whether inculturation can be free from the influence of transmission culture, and whether art and artists originating from a colonial mission base can ever be free from contamination.

2020-08-28
Previous Post: The exhibition is a colorful weaving of textures
Next Post: The World Art Deposit Day extends practically this year to the art “Boutique” day.