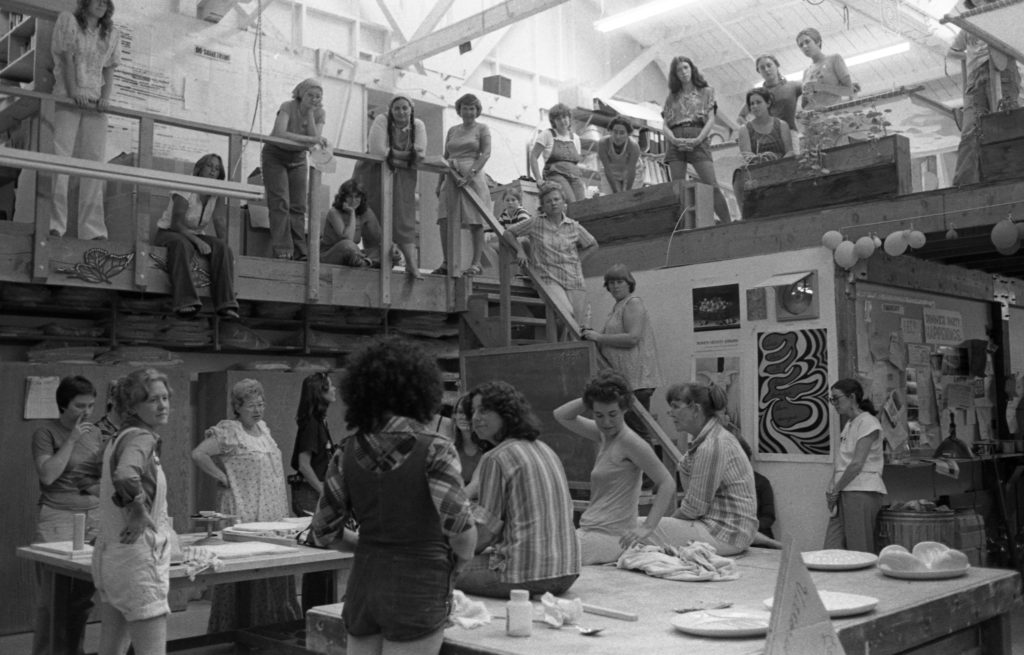 In a dark room in the Brooklyn Museum, 39 ornate place settings, each representing a woman forgotten in history, are arranged on a triangular table.

Colorful, domed plates – many of which are abstract depictions of female genitalia – are placed on hand-sewn, gold table runners. The table, measuring 48 feet on each side, rests on what is called heritage flooring: 2,000 sparkling white tiles that contain the names of 999 other women.

Emily Dickinson’s plate, adorned with layers of stark pink lace, is a metaphor for the repressive Victorian society in which she lived. And the plate of Margaret Sanger, birth control advocate and mother of Planned Parenthood, is painted in a startling red glaze, meant to represent the blood shed during childbirth and the activists who fought for reproductive freedom. .

With the popularity of the #MeToo and Time’s Up movements, this massive shrine to feminism, which feminist artist and educator Judy Chicago completed in 1979, is garnering renewed attention for its triumphs, but also for its problems. Carmen Hermo, assistant curator at the Brooklyn Museum’s Elizabeth Sackler Center for Feminist Art, wanted to showcase the two for the museum’s latest exhibition of the work.

In 2017, the Brooklyn Museum, the permanent home of the Dinner Party since 2002, resurfaced planning notebooks, research papers, and test artwork from the creation of the Dinner Party as part of its “Year of Yes», a showcase dedicated to feminist art. “Roots of the Dinner Party: History in the Making” was the initiative’s final exhibit and showed the massive effort that went into creating the piece in the Chicago studio, something that Hermo says was missing in the conversation about the well-known work.

“It’s become so iconic that the manufacturing and the physical processes behind it have kind of slipped through the cracks,” she said. “The intense process of painting porcelain, the process of finding 3,000 women before it was reduced to the 1,038 women of The Dinner Party… that kind of hard work son was really important to me.” 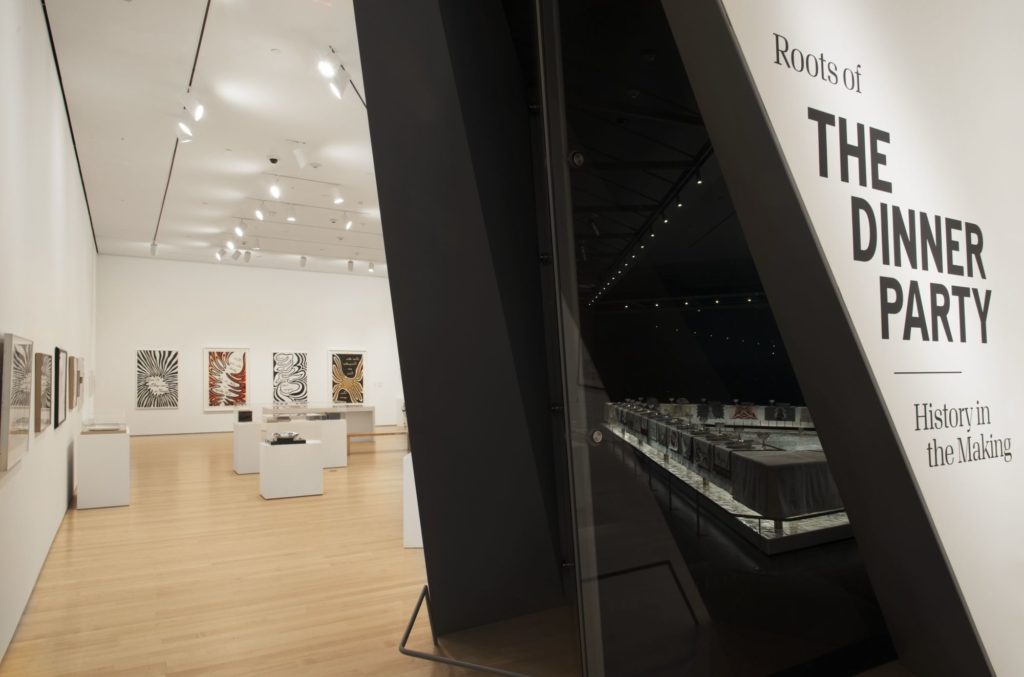 Roots of “The Dinner Party”: History in the Making, 2017. Images courtesy of Brooklyn Museum, photos by Jonathan Dorado.

The National Museum for Women in the Arts in Washington, D.C. also hosted an exhibit on the Dinner Party studio last year and is currently acquiring an image archive of Chicago decades-long career to be housed in the museum’s Betty Boyd Dettre Library and Research Center.

Library director Sarah Osborne Bender says Chicago work is once again “going through a while,” especially among a younger group of museum-goers.

“The message of this work is so literal and relevant now, it undoes the erasure of women in history,” Bender said.

Chicago’s vision came from the overt sexism she experienced in her professional life in the 60s and 70s.

Male artists were demeaning, and calling someone a “p***y,” a term Chicago hated, was the favorite insult in artistic circles, Hermo said.

“She was so embarrassed and ashamed of it,” Hermo said. “What does it mean that the ultimate reprimand was being a woman?” 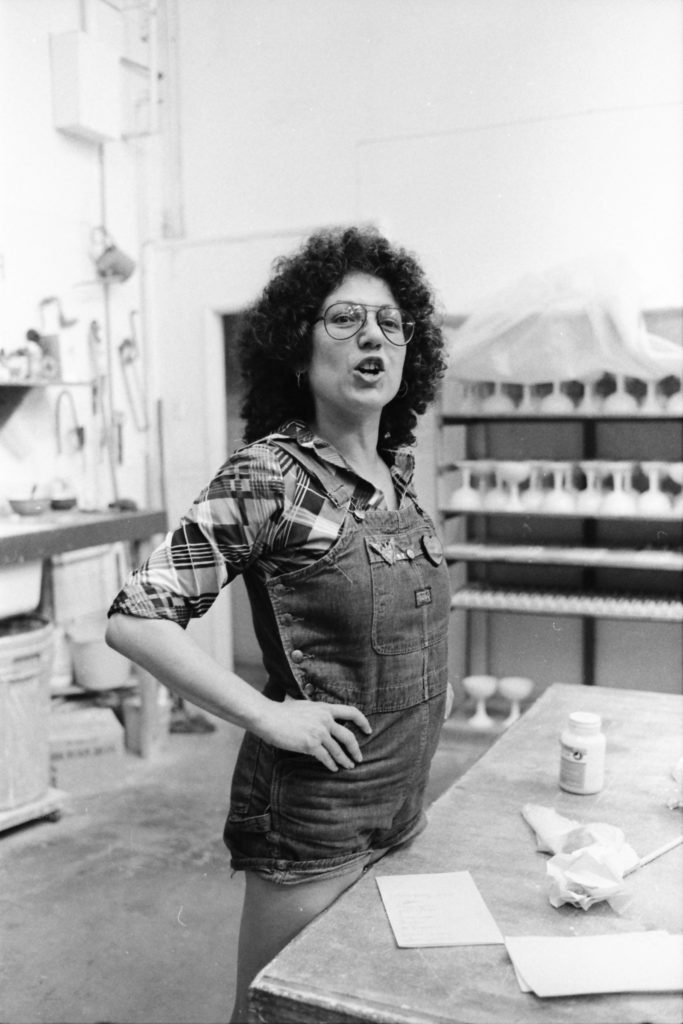 The National Museum for Women in the Arts reports that 51 percent of visual artists today are women, yet their annual income is, on average, $20,000 less than that of their male counterparts according to study 2016 in the journal Social Currents. And when the art market site named artnet its 100 most collected living artists, only two women made the list.

A score from the National Museum of Women in the Arts found that only 9% of the artists in one of the most well-known art history textbooks, Janson’s History of Western Art, are women. The book is in its ninth edition. The first edition featured no women.

When Chicago began its search for workers for its Santa Monica studio in 1975, Susan Hill was the first to arrive. More than 100 other women followed, volunteering for the project.

Hill and the other Dinner Party workers — today they call themselves the “leftovers” — believed the responsibility of telling the stories of forgotten women rested on their shoulders. “We felt incredibly responsible for bringing it forward,” Hill said. 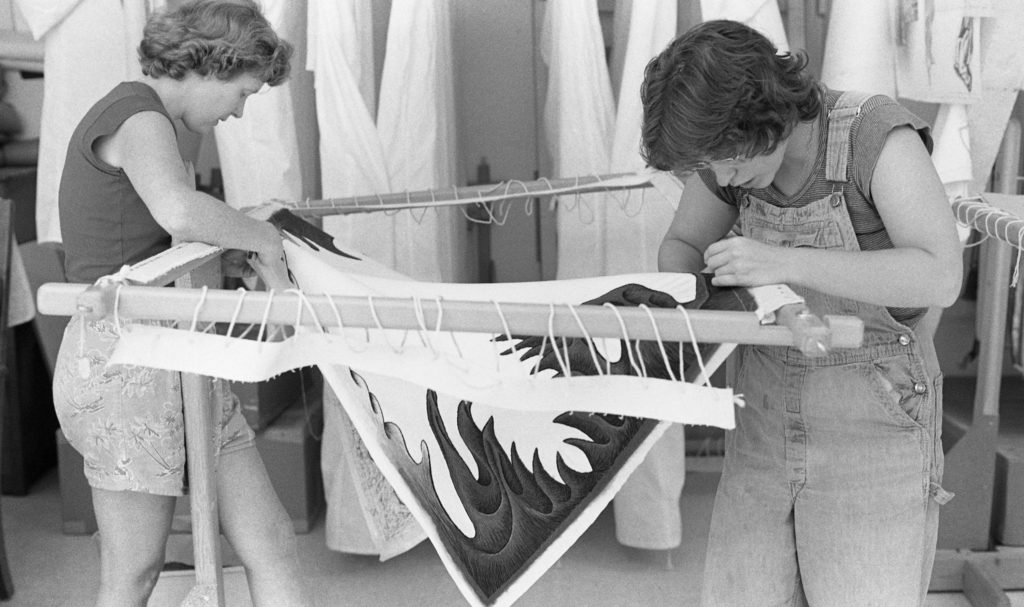 Chicago set out to revamp the way women were portrayed in history by using traditionally “feminine” crafts such as china painting and sewing. The piece was originally designed to include 13 Last Supper-inspired painted plates, but grew as Judy’s vision evolved and more women came to the studio, Bender said.

Hill likened the atmosphere to a beehive, with little chatter, the occasional song on the radio, and an activist work ethic. The women of the Chicago studio were so dedicated that some left their jobs, relationships, and even marriages to fully commit to the studio.

Kate Amend, another Dinner Party employee, quit her job in Los Angeles and lived on her savings so she could work full-time on the project. The camaraderie of the studio and Chicago then-iconic feminist vision of education – still taught today at Penn State – compelled Amend to uproot her life to fully commit to the Dinner Party Studio.

“I’ve never had this experience in my life of being really energized by work,” Amend said.

She was not alone. For many women, Hill said the intense responsibility for the work’s mission matched whatever it gave them in return. 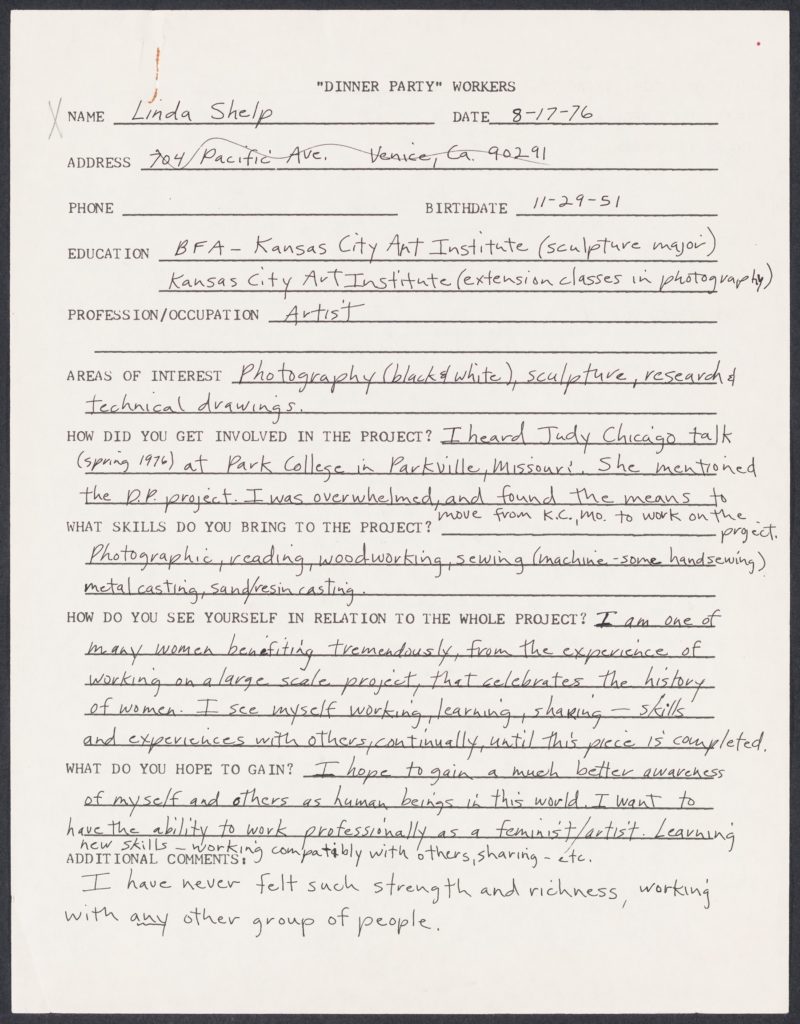 A Dinner Party Worker says “I have never felt such strength and richness working with another group of people” on his information form from “The Dinner Party”, 1976. Schlesinger Library, Radcliffe Institute, Harvard University, Cambridge, Mass.

“It was really mutual. I mean, it wasn’t like going to work because this thing has to be done, it was ‘I’m personally so responsible for…this part of the story or this part of’ a plate,'” she said. “We were fed so deeply by that.”

Bender said one of Judy Chicago’s goals was to create an “army of women” who would absorb her feminist ideals and carry them into their lives outside the studio. “She saw it as a way to seed that kind of philosophy,” Bender said.

But while Chicago’s work was seen as groundbreaking, it was – and still is – criticized for its lack of diversity, which is reflected in both the women included at the table and the demographics of the workers themselves.

“You start thinking about who might be packing up to leave family for a few months and go to Santa Monica and have money to spend on a few months rent in a new city,” Hermo said, adding that the composition of women primarily represented “the upper-middle-class white version of history.”

The only two women of color to have a table seat in The Dinner Party are Sojourner Truth and Sacajawea.

“If you’re Hispanic, you won’t see anyone who looks like you. There are no Chinese. There are no African people,” said Jane Gerhard, an academic who has written on Chicago and 1970s feminism. “So The Dinner Party is like Western civilization with a real American twist.” 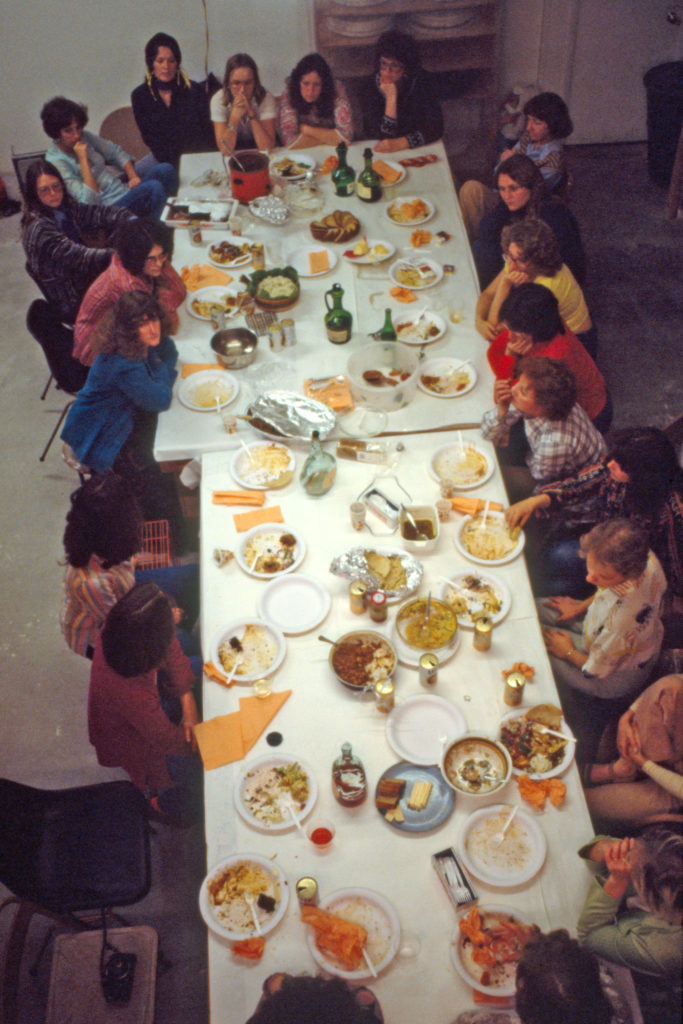 Thursday night potluck with workers at “The Dinner Party”, 1978. Courtesy of Through the Flower Archive

Given its scale and the time it took to create, The Dinner Party also lagged behind a rapidly changing feminist movement.

Gerhard called The Dinner Party a “snapshot” of American feminist history, reflecting second-wave feminism’s focus on challenging mainstream male-dominated culture. But by the late ’70s and ’80s, feminism had expanded to focus on including more diverse voices, like women of color.

“[Judy Chicago] disappears in the studio for five years. When she came back in 1979 to exhibit the piece, feminism had changed quite a bit,” Gerhard said.

Visitors’ diaries from the 1980s also showed that some found the work to be a “total revelation” while others found the “symbolized” inclusion of women of color in Chicago troubling. Visitor logs in recent history, Hermo said, also criticize the lack of Latino and LGBTQ guests at the table. 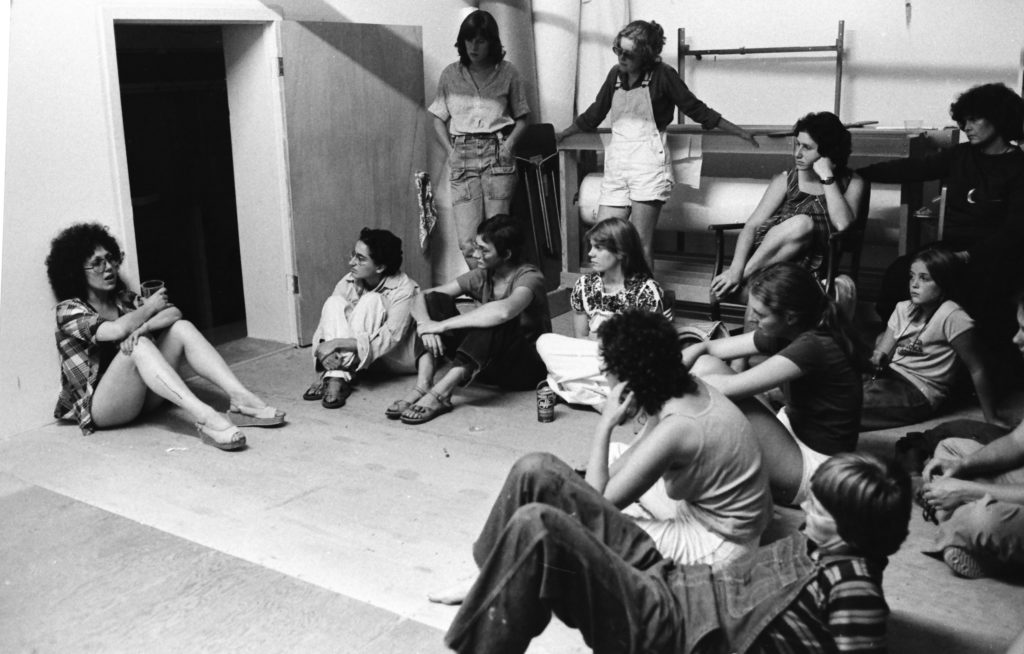 One of The Dinner Party’s famous critics, writer Alice Walker, was disappointed to see that the only black woman at the table was associated with the legacy of slavery. Walker wrote of his experience at The Dinner Party in this 1979 essay “A child of his own.”

But in #MeToo time, The Dinner Party still resonates.

Hill, who likes to visit it years later with other former Dinner Party employees, says that despite its flaws, the work has something important to say about the representation of women in a male-dominated world. Hill insists The Dinner Party wasn’t just ahead of the curve when it came to equality and justice for female voices.

“We were the curve,” she said.