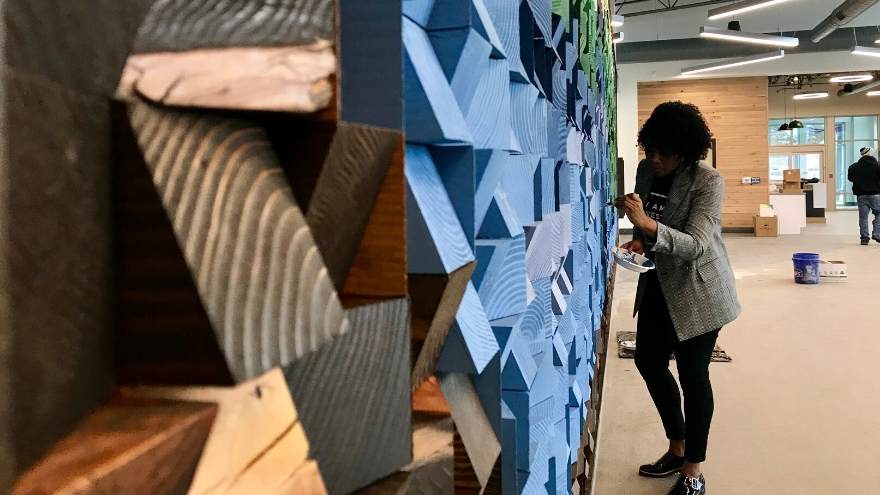 “I wanted to use something that represented the Earth, which is why I offered to work with wood. It’s called “Bend and Flow,” Kulemeka said.

The installation was placed in his new home on a wall in the community center on Tuesday morning. Kulemeka will be spending the days leading up to the official reopening of Howard Park on November 29 doing some retouching.

Kulemeka says the 24-foot-long room is a nod to the St. Joseph River, which runs along Howard Park.

“I wanted to do something that was very tactile and that you could touch and that no one was afraid that it was messed up or whatever and that the kids could interact with it a bit,” Kulemeka said.

The project, in total, took about a month, but Kulemeka did not work on it alone.

The Indiana University at South Bend graduate asked students and parents at Nuner Fine Arts Academy to lend a hand with painting the wood blocks.

“Of the 2,000 blocks in the facility, the students probably painted 800,” Kulemeka said.

With the blocks painted and the design in place, Kulemeka received a bit of help from the skilled trades workers to assemble the final product.

Kulemeka hopes community members who visit Howard Park, whether it’s taking a class or enjoying an evening of ice skating, will find joy in his work of art.

“It’s just exciting to have grown up here to see the changes at Howard Park and to be able to bring something really beautiful, to make South Bend beautiful and to make it welcoming to everyone,” Kulemeka said. “I hope everyone can enjoy it.”

Kulemeka’s play will remain at the community center until around June. After that, she hopes other local artists exhibit their work in the space.