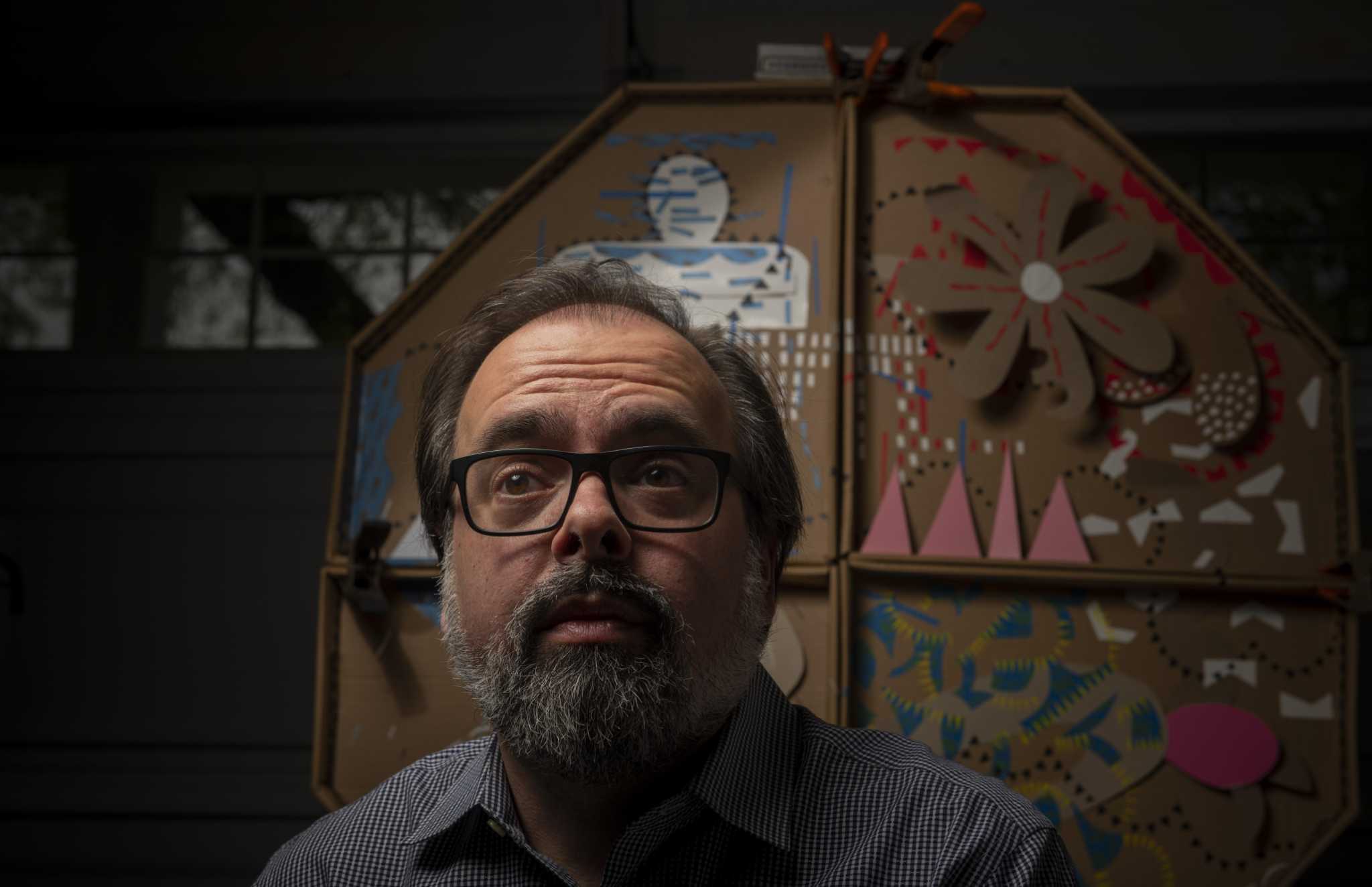 Ever since Jimmy LeFlore started posting images of his artwork on Instagram, his friend Jesus Toro Martinez has been pestering him to show them off.

“I try to find these artists in town who have been working for years but never had the opportunity to release their work because they are so committed to their daily work,” Martinez said. “That’s what I try to do – bring out people that we know, but we don’t know their work.”

LeFlore, whose friendship with Martinez dates back 30 years, finally gave in a few months ago. Her exhibition “Late Bloomer, Spring 2019” opens March 9 as part of the Second Saturday Art Walk in the Lone Star Art District.

The exhibit includes a handful of drawings as well as pieces that transform everyday objects such as blue duct tape and packaging materials into living collages.

What: Opening of the exhibition “Jimmy LeFlore: Late Bloomer, Spring 2019”

“It’s electrifying,” Martinez said. “I always call them paintings, but they’re not. It’s painting in a very untraditional way that really pushes the boundaries of what painting can be.

On ExpressNews.com: “Capturing the Moment” at SAMA Features Iconic Photographs

All of the work for the show has been done over the past few months. LeFlore, 48, had set aside much of the working artist when he went to work for the city nearly 20 years ago.

“My goal for so long has been to keep one foot in the art world and one foot employed – that stuff happens,” he said with a laugh. “Because I have one foot firmly planted in the job, I haven’t really had the financial connection to do art physically, so I’ve done a lot of artwork that’s in notebooks sketches or are digital drawings. I didn’t have the desire to just create things that I would collect and hoard, so I just cut off that part of my brain.

Over the past few years, LeFlore said, he filled notebooks with sketches, creating abstract images mixed with references to things he saw on his walks. When he was done, he said, he would post pictures of what he had created on Instagram.

He also didn’t really want to show the work beyond social media posts.

Some changes in his personal life, coupled with encouragement from Martinez and other friends, helped him return to showing his work. He and his wife are almost empty nests. Their oldest daughter is a graduate of Trinity University and lives alone, and their youngest daughter is a senior in high school. And so the family has downsized, moving into a “skinny” airy house in Mahncke Park last August.

The garage in their new home isn’t big enough for a car, he says, but it’s ideal for a comfortable studio, giving him a place to work. The basics of the move – cardboard boxes and colorful packing tape – also helped the fire is the imagination. Before, he says, he worked a lot in black and white and was interested in color.

He started thinking about color theory and how manufacturers use color in their packaging to grab consumers’ attention and, ideally, convince them to buy what’s inside.

“So I was kind of thinking about what was left in terms of the box and I was thinking that instead of just treating it as waste, maybe I could treat it as raw merchandise,” he said. .

On ExpressNews.com: Guide to the month of contemporary art

He transformed a cardboard bottle rack from Central Market into two small sculptures evoking natural forms. A reflective silver square from a birthday wrapper became the platform for another piece, giving it added dimension: “The base is integral to the work so you have the sculptural dimension on both counts “, did he declare.

He intends to continue working in this vein, creating and showing his own work while continuing his work for the city.

“Ideally, I would like to become a practicing studio artist,” he said. “I will try to have more balance in my approach. It’s about being part of the (artistic) community in a different way. I’ve been part of the community, but I’ve been a bit one-dimensional when it comes to. And as you get older, you realize you only have a short time. So I think of all the work that I didn’t do that I could have done. And I think that also makes me more fit to go.

Some of that thinking grew out of her experience working with her siblings to help their aging parents.

“My parents were really proud that I went into art and went into public art and did so much for the city they knew,” he said. “And I also think they would like me to not give up on making art myself either. So it’s also reconnecting things that have been threads throughout my life.

Deborah Martin is an arts writer from the San Antonio and Bexar County area. Read it on our free site, mySA.com, and on our subscriber site, ExpressNews.com. | [email protected] | Twitter: @DeborahMartinFR