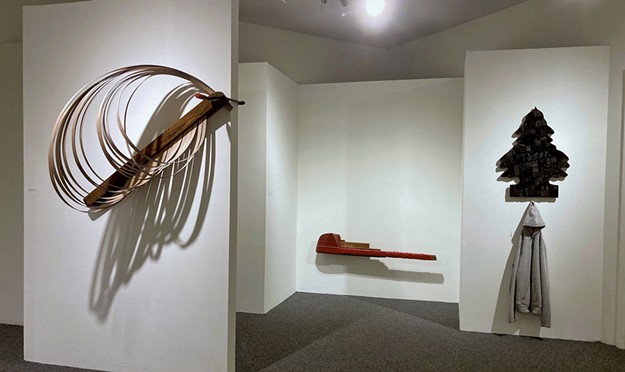 William ransomexposure could make you sneeze. “Keep Up / Hold Up”, on display at Brattleboro Museum and Art Center, has two unexpected olfactory elements: pine tar and burnt wood. Their nose-tickling aromas were pungent at an opening reception on October 23 and still linger.

But that hasn’t and shouldn’t stop viewers from taking a close interest in Ransom’s works. Although modest in number – six sculptural pieces plus an artist’s charcoal outline drawn on one wall – the collection is visually and conceptually powerful. And its mildly caustic fumes are in fact apropos.

Painfully eloquently, Ransom approaches the current national calculus with systemic racism. His sculptural creations show us the terrible consequences of this system, as well as the tensions inherent in the drift towards “a more perfect union”.

The tension is also personal. Ransom, 46, is mixed race, born to a white father in Vermont and an African-American mother in Pennsylvania. He grew up on a dairy farm, surrounded by the rhythms of nature and the tools and materials that now serve his work. (In early adulthood, he co-founded Strafford Creamery with his two brothers.) Ransom admitted that he “grew up in mostly white spaces… listening to country music and hip-hop”.

While he doesn’t feel particularly downtrodden, Ransom said, he knows his skin color dictates the context in which others see him. Sometimes he wishes he could “just make art,” he admitted, but he also feels compelled “to respond to this moment” through his practice.

“Whatever work I do, it will be read through the inescapable prism of my darkness,” he wrote in an artist statement for BMAC. “I am simultaneously compelled to maintain (maintain) my darkness and maintain (verify) my darkness.”

Chief curator Mara Williams, in her own gallery statement, puts it this way: “Carrying the weight of white supremacist history, William Ransom’s sculptural installation creates a transitional, transient state of unease and to an inherent uncertainty. ”

Williams makes particular reference to the artist’s pieces which are constructed from narrow strips of wood and held together by a workshop clamp. Clearly including such a utilitarian object is not just a fanciful aesthetic choice. Take it off and the tense architectural form “would fly away with this incredible energy,” Williams said over the phone.

As such, the tool also becomes a metaphor for America’s ambitious motto, e pluribus unum – “among many, one” – and for the fragility of this pluralist ideal.

One of Ransom’s sculptures incorporating a clamp is the “Our Unfinished Work” mural. In it, over a dozen strips of wood are neatly attached, side by side, to a dark colored 4 inch by 4 inch post about 40 inches long. Ransom gathered the bands together, buckled them, and tied the entire bundle, like a barrette, to one end of the post. The work’s dichotomy between order and chance aligns with its title.

The resulting form of the sculpture, encouraged by its shadow on the gallery wall, is reminiscent of a whip gone bad.

The freestanding “Steal Away” has a more robust and even imposing presence, rising six feet in the center of the gallery space. Assembly of vertical and horizontal wooden elements, it looks like a sail in a strong wind. To anthropomorphize, he seems assertive. But is the clamp near the base of the coin, as Williams suggests, “temporary”? His presence introduces the possibility of a mutiny.

These works hold a potential of energy: the promise, or the threat, of what could be. Maintaining the balance, they seem to imply, is a heavy responsibility.

Specifically, “Keep Up / Hold Up” addresses the trauma of violence and persecution suffered by people of color in the United States. Three of Ransom’s facilities at BMAC reflect on the police murders of black men, all in Minneapolis.

“Token” is a 23 by 26 inch rounded slice of birch. Ransom engraved on its surface the outline of a buffalo and the words “FIVE CENTS”. The coin calls out the phrase “Don’t take any pieces of wood” and is an indirect reference to the allegedly counterfeit $ 20 bill that George Floyd, 46, presented to a convenience store cashier on May 25, 2020. It is the reason police were called to the scene and resulted in Floyd being killed by suffocation below the knee of Officer Derek Chauvin.

The title “88” may be obscure to some viewers; it refers to an Oldsmobile Eighty-Eight – the make of the 1997 car that 32-year-old Philando Castile was driving when he was pulled over for a broken tail light in 2016. His girlfriend and 4-year-old daughter were in the car, forced to see a police officer shoot Castile while he was probably looking for the registration of his car.

Ransom depicts this murder with a scrap wood facsimile of a car bumper and tail light wrapped in red plastic. Even without the context, the piece appears like a fragment of disaster.

The “Taser” installation consists of blocks of charred wood assembled in the shape of a pine tree, approximately 4 inches thick and 30 inches high. He is referring to the car air freshener that Daunte Wright, 20, hung on his rearview mirror – an “obstruction of vision” for which he was arrested and then shot dead last April.

This is where the pine tar comes in: a ransom cut “TASER” down the center of the tree and stamped the word with the sticky substance, allowing it to drip off.

“He wanted him to kind of cry black tears,” Williams explained. Ransom’s gray hoodie, which he spontaneously hung under the wood in tears during installation, soaks up some of those “tears.”

Although born in a place with more cows than cops, Ransom is no stranger to being arrested for “driving in black”, nor to city life. In an interview at his Norwich home – which he shares with his wife, Oona Gardner, a ceramist who grew up in Vershire, and their two young daughters – he explained that his father had moved the family to the coast west when he was in middle school. Ransom graduated from high school in northern California.

Eventually back in Vermont, Ransom attended Bennington College, where he received his undergraduate degree in sculpture and architecture in 2004. He returned to California for his MFA at Claremont Graduate University.

But he dreamed of returning to Green Mountain State again, Ransom said. After a year as a visiting professor at Middlebury College, he accepted a professorship in 2018 at Marlboro College. Two years later, this school closed. Ransom now teaches both at his alma mater, Bennington, and at Dartmouth College.

He and Gardner bought their Norwich home in March 2020, Ransom said, just as the coronavirus arrived. With a studio nearby, it’s not a bad place to hide in a pandemic.

The beautiful mid-century house is filled with works of art. There are ceramic wall sculptures by Gardner and earlier Ransom pieces made in response to living with type 1 diabetes. A small assembly on a shelf in the living room includes a clamp embedded in concrete and five 100 bills. $. Entitled “Jupiter’s Redemption,” it refers to an ancestor of Ransom’s mother who, as a servile slave in 1832, was valued at $ 500.

On the other side of the coin, next to a print by French abstractionist Sonia Delaunay, is an Obie Award. It was for a billboard owned by Clear Channel that Ransom created in honor of Floyd.

A Friend at Minneapolis Arts Nonprofit NE Sculpture | Gallery Factory invited him to participate in the Social Justice Billboard project, Ransom explained, noting that the two-dimensional typographic medium differs significantly from his usual 3D work. And he was quite surprised to win an award for it. “I didn’t know there were Obies for billboards,” Ransom remarked.

At the intersection of East 38th Street and Chicago Avenue in Minneapolis, the billboard was perched for three months on a two-story building overlooking the Floyd Memorial. It contained three lines of white text on a black background. Two are biblical quotes; the third is a simple yet powerful statement that has international value in the Black Lives Matter movement.

Ransom noted that billboard installations are underway. “Now is the time for us to scream from the rooftops,” he says in a video for the project. “We are now living in the gospel of George.”