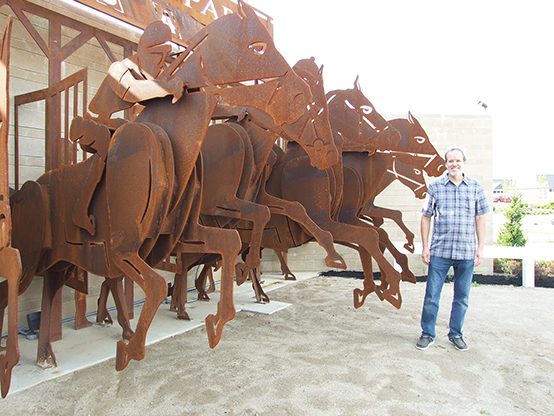 Every time Dominic Massenelli walked through the gates to enter Beulah Park Racecourse, a buzzing sensation moved throughout his body.

He was eager to see which horses were running that day, to listen to the punters as they debated the odds, to jostle with the large crowd for a good seat in the stands, and to wait for the moment when the announcers had. shouted “And they” d Off.

The Grove City resident said being a part of that action, even though he had no money at stake, still gave him goosebumps, even as the crowds have dwindled over the years.

“You went there for the experience, to soak up the atmosphere that prevailed before, during and after a race,” said Massenelli.

He couldn’t remember how many times he had visited the racetrack in his youth and in his adult years, but he said each trip created a new memory.

Like so many others in the community, Massenelli was saddened when he learned that the racetrack, which was Ohio’s first thoroughbred racetrack and the first event center, was closing for good in 2014.

“It was a little heartbreaking that something with so much history, something that meant so much to so many people in the city, was going to leave,” he said. “But I guess that’s life. Times change, things move, things move and people move forward. “

Several years later, investors purchased the 212-acre property in order to develop new residential and commercial space that would be connected to the downtown area. Massenelli and his wife, Cindy, were intrigued by the news but feared that the country’s history and all the memories created would be forgotten.

It didn’t have to be.

Three years ago, as development plans began, Beulah Park Living developer Pat Kelley, Falco, Smith and Kelley, Will Bunstine and the Williams family announced they were commissioning a public art installation to be placed. in the 32 acre park located within the development.

Instead, the end result was a massive 12,000 pound Corten steel sculpture that has six horses and their jockeys springing from the starting gate. One door is empty although the silhouette of the clawed horse and the helper leading it back to the stable are visible in the background.

Designed and created by artist and architect Craig W. Murdick, the sculpture aims to commemorate the history of the racetrack, the dedication of trainers, and the beauty and power of horses.

“It was designed to capture the movement, the excitement of when the announcers shout ‘And they’re gone’ and the frantic race when the horses jump out of the gate,” said Murdick, an Upper Arlington resident.

Like the original design of the memorial sculpture, Murdick was initially not the first artist the developers of Beulah Park Living had in mind.

“We’ve worked with Craig for over a decade (Murdick’s architectural firm, Murdick Creative, designed the Beulah Place apartments and townhouses on Beulah Park) on various construction projects, but we didn’t know that he had that kind of talent, ”Kelley said.

“He has designed a magnificent work of art that perfectly sums up the history of this site and the promise of what it can hold.”

It took Murdick nearly three years to complete the sculpture “And They’re Off” – his first official public artwork. It includes an anchor wall for the heavy steel of the catapulting horses, sand that has been preserved from the racetrack, and strategically placed cutouts and lighting fixtures so that it casts movement shadows according to time of day.

Cindy Massenelli said she and her husband – who live on the outskirts of the new development – have watched the process of this art installation for months and were “immensely pleased” with the results.

“We love coming here to see this sculpture because it is constantly evolving,” she said. “It’s just a great design, a great way to honor the history of this site and the impact it has had on this community.”

“And They’re Off” opened publicly on September 17th in the new Beulah Park Living development. It is located near the intersection of the Columbus Street Extension and Beulah Park Way.