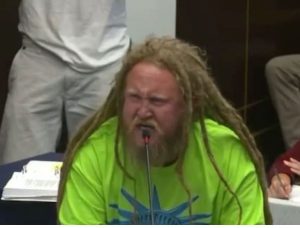 OB’s Ranting ‘Whistler’ back in the news

He’s back in the news. OB’s own “Whistler”, Matt Baker, who drew national attention and derision when videos of him at the County Board of Supervisor whistling and ranting went viral.

This time, Baker made an artwork commemorating the OB woman who was killed trying to storm the Capitol on January 6. The woman, whose name OB Rag will not repeat, was a QAnon supporter and held fascist views of Biden and Trump. She lived in OB for a very short time and was mostly from the East County neighborhood of Spring Valley.

KUSI reporter Dan Plante, who lives in OB and has recently done some good reporting on the possible loss of OB and Point Loma palms, stooped to new depths in his absolutely glowing and embarrassing account of Baker and the QAnon supporter. Plante aired a total smear of the woman, Baker and all the turmoil of a year ago. Shameful. It makes this writer want to boycott KUSI for this despicable report.

Trump, his sycophants — and now Baker and Plante — tried to make the QAnon supporter a national symbol and called her a “patriot.” Nothing could be further from the truth. She was a fascist, believed in nullifying a legal election and replacing the new legally elected president with an orange-haired authoritarian in the failed coup. That she was involved in the violent fascist putsch attempt makes her someone most people in Oceania (and Americans) would like to forget.

For example, Plante said she was killed in the shootout. Bullpucky. She was shot as she attempted to climb through a broken window into the interior chambers and try to prevent the certification of the national presidential vote.

She and the mob threatened the lives of Congressmen, Vice President Pence and Vice President-elect Kamala Harris as they stormed the citadel of American democracy.

KUSI – despite its good coverage of local news – is the city’s most reactionary television station; he consistently derided the seriousness of COVID, rejected vaccines, and nurtured a far-right anti-vaxxing attitude. It’s Fox News San Diego (not Fox5 San Diego).

Supposedly there is at least one memorial to her somewhere in OB. It should be removed.

It’s too late to mince words. You have to call things as they are.