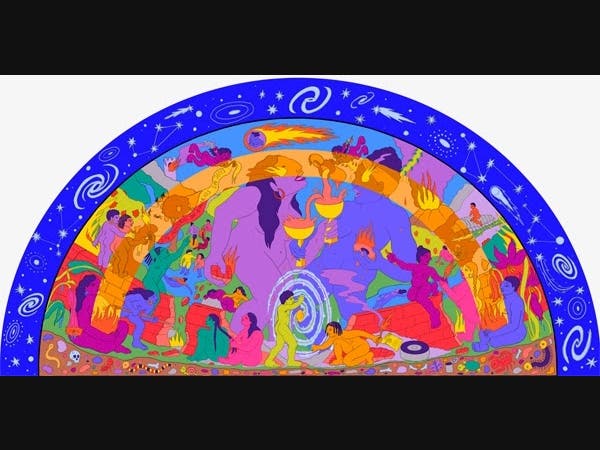 New 28-foot artwork to debut at Bandshell in Prospect Park

PROSPECT PARK, BROOKLYN – A massive art installation directed towards the bandshell of Prospect Park will imagine a utopia where dividing walls are smashed.

The piece, created by artist Emily Oliveira, is set to debut at the Lena Horne Bandshell on Friday and will be on display until next May, the Prospect Park Alliance announced this week.

The 19-by-28-foot mural features humans, insects, goddesses and other beings joining together to dismantle a brick wall as a symbol of rebirth for the post-COVID era, according to the organization. It’s all titled “This is a time to be remembered as the start of the great change, for who can tell when a wall is about to fall”.

“Emily Oliveira offers a utopian vision of a future that appeals but doesn’t make too many promises,” said Jenny Gerow, curator of contemporary art at BRIC and curator of mural painting.

“As the title suggests, who can tell when the wall is ready to fall? Always present in the foreground and in the background are the vestiges of the present, of systems of hierarchy and oppression. The artist is a master in the art of seduction, often achieved in his textile-based work, thanks to the use of shiny and silky textiles and embroidery, but here created thanks to bright colors and the temptation of the touch and care that we have all been waiting for a year. “

The artwork is put in place by the BRIC, the Alliance and the city’s Parks Department.

It will debut with an opening celebration from 4 p.m. to 7 p.m. Friday at the bandshell, which was one of 16 parks in the five boroughs renowned for prominent black New Yorkers earlier this year.

Oliveira, who is a master’s candidate at Yale, drew inspiration from the WPA’s federal fresco projects and Mexican muralism to create the work. His art is rooted in queer theory and science fiction, including those who “embrace the potential to collectively imagine a new cultural and social fabric,” organizers said.

“In the conception of Oliveira’s utopia, leisure and frivolity can and must coexist with direct action: milk and honey with fire and sulfur,” they write. “In this landscape, leisure and care are not seen as unnecessary tasks but supported as the driving force for radical change.

The artwork will replace an older installation at the music pavilion that was put in place last fall.