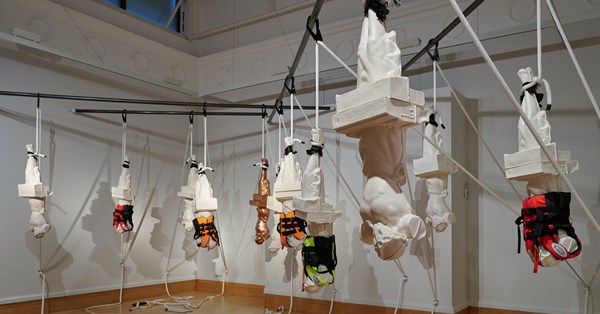 Michael Forbes, Black This and Black That. . . a state of emergency, at the Djanogly Gallery, Nottingham

ON ENTERING Gallery 1A of the Djanogly Gallery, one sees a series of dismembered torsos – the arms of all the figures missing – of the crucified Christ in molded jesmonite, mostly white, but with gold and pink also used, and hung upside down ropes whose ends trail on the ground. In this largest sculptural installation here, some of the torsos wear life jackets, indicating recent political and humanitarian events.

Untitled i highlights “how the European white man has dominated the image of Christ” and challenges white viewers with the question of how they “reconcile the example of Christ while reaping unfair advantages for being white”. Forbes has, for many years, questioned this aspect of religion, “believing that it is morally and theologically incumbent on Christians to realize how whiteness confers privileges that impact the lives of black people and people. of color”. The installation (through the inclusion of life jackets) raises these questions in relation to the legacies of the slave trade and also the current refugee crisis.

Both the slave trade, with the ocean voyage of the Middle Passage, and the refugee crisis, with its crossings of the Mediterranean and the English Channel, feature again in An Eldorado of 512.6 million, in which these same characters are tossed about and submerged in an ocean of gold that alludes to the economic disparities contributing to mass migration. That the figure of Christ is now black with outstretched arms in the position of a crucifix is ​​to equate the sufferings of slaves and refugees with those of Christ himself.

The figure included here from Forbes’s 12 Masquerade StationsThe e series is a multimedia piece featuring expanding foam, OSB board, razor wire, African sculptures, handbags and a baseball cap. These latest items are counterfeit designer goods exported from China and sold by migrants on the streets of Europe to survive. This work, and its lightbox is working Shop. . . Selling the ontology of whiteness, based on photos of shop windows, comment on globalization and the processes of valorization in relation to migration and trade. “Whiteness sells” is the hypothesis put forward by Forbes, putting aspects of consumption alongside aspects of religion by favoring whiteness.

In Untitled (white man’s burden), rodeo-style white mannequin rides, bulky PVC-wrapped packages illustrating the precariousness of the white supremacist position. Mirroring statues on plinths that represent perceived winners in the game of history, these wheeled plinths are actually inherently unstable. The malformed mannequins featured there portray the ugliness of minority views that “allow discrimination, racial hatred and violence to thrive.”

As these works ably demonstrate, Forbes works with sculpture, installation, photography, and digital media to explore themes of contemporary racial politics, migration, history, religion, and the black dichotomy. /White. These new works, exhibited together for the first time in three galleries, were conceived during the Covid lockdown for Forbes’ Masters in Sculpture at the Royal College of Art.

The heart of the exhibition is in its tribute to the black body for its survival. Masquerade. . . evolution of the black body revisits totemic sculptures, which Forbes has wrapped and bound like a cocoon in shiny black PVC. The bulging skins absorb and conceal an assemblage of symbolic objects which he believes have been consumed and transformed in the evolution of the “black body”.

His artistic practice began with photography. His series Carnival… beyond the splendor of the parade documents the bustling street carnivals of the Caribbean with imagery that celebrates music, dance, fashion and sexuality, as they unapologetically affirm and honor those who are underrepresented. Alongside are the most obviously polemical works of the exhibition. These textual works reproduce either slogans taken from the banners of protesters during the 2020 BLM demonstrations, or signs warning of the presence of surveillance cameras or the danger of electrified fences and razors. This exhibition is an act of protest against historical and current constraints.

“Blk this and Blk that. . . a state of emergency” is at the Djanogly Gallery, Lakeside Arts, University of Nottingham, until 6 November. www.lakesidearts.org.uk