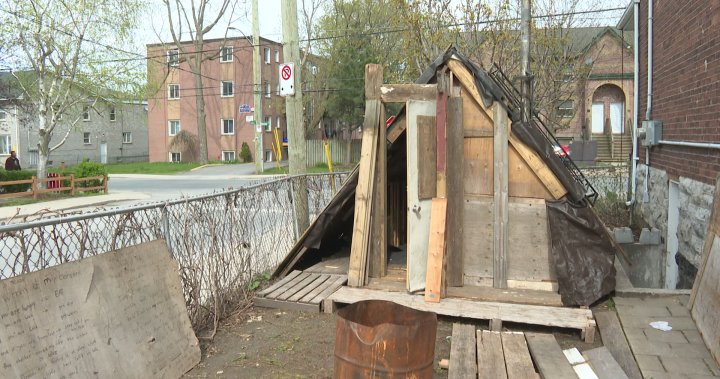 If you pass by the Rideau and Charles streets area, you may notice a new addition in the yard of a resident’s home.

A recreation of a hut used to keep a homeless Kingstonian warm is now on display as a reminder to the community.

“We just thought it would be important to remind people and the public what people have to go through when they’re homeless,” says Kingston resident and activist Chrystal Wilson.

The idea is also to help the original creator of the cabin, who wishes to remain anonymous for the protection of his daughter, to close the door to his experience and move on. He built the structure during a cold winter in the woods.

“There was a factory at the end of the road where I was staying in the bush there, and I asked them if I could pick up some pallets that were next to the dumpster,” the builder explains.

“I just started grabbing bits here and there and slowly putting them together over three or four days,” he recalls. “I had built everything and it was better than sleeping on the ground outside.”

Wilson was moved by a sign that accompanied one of the shelters she first encountered in the Centennial area.

It reads in part: “If you are hungry, eat. If you get wet, dry yourself off. If you’re cold, warm up. And if you are homeless, stay until you are no longer. This shelter saved my life in the winter of 2020. Please don’t destroy it and steal what little I have left in my life.

“He was someone who was really generous when he had nothing at all to give, but was willing to give what he had,” she says.

For the builder, the recreation of his hut is a message to others facing homelessness.

“If there’s anyone walking around getting frostbite and losing their toes and freezing to death, I hope they can just look at this and get an idea of ​​a similar type of shelter to stay in. warm.”

Wilson says now that the hut builder has stability as a resident with the sleeping cabin program, he’s on the right path to getting back on his feet and moving forward.