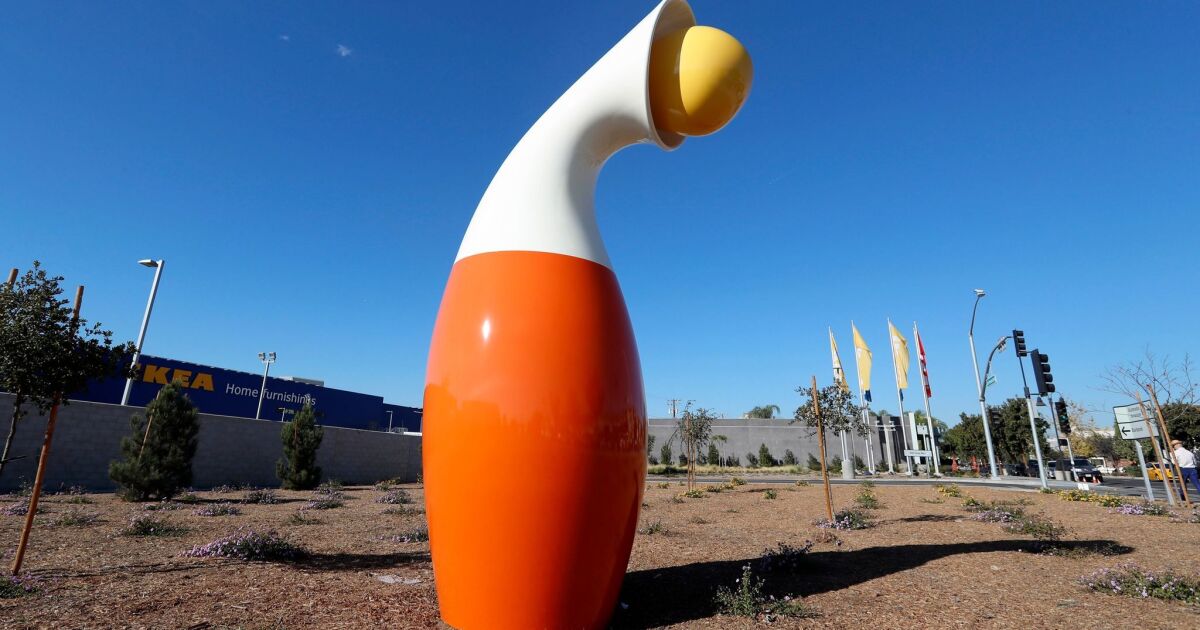 After about two weeks of waiting, the sheath was removed on Friday from a new public sculpture at IKEA Burbank that had raised a few eyebrows before its unveiling.

Under the blanket was a 16-foot-tall abstract sculpture of a vase named “Bobble,” created by Christian Moeller, a renowned artist and art professor at UCLA.

The city of Burbank and IKEA officials gathered near the store entrance on San Fernando Boulevard to unveil the city’s 100th art installation which is part of Burbank’s Art in Places Ordinance public.

Its base is orange and white, with the neck of the vase tilted forward. It has a yellow ball-shaped object protruding from the top of the vase that moves when blown by the wind.

Although the sculpture was created and designed by Moeller, the artwork was made by John Baker and members of Carlson Arts.

Over the past two weeks, many passers-by on social media claimed that the sculpture, which was wrapped in white material, resembled a phallic object. However, Friday’s reveal hopefully ended those comments, according to IKEA officials.

“I love that it’s blown away and I think the colors are gorgeous,” said Jeff O’Shaughnessy, IKEA Burbank store manager. “I’m a fan of public art, and I think it’s a beautiful piece.”

Robert Grimsley, real estate director of IKEA North America, said during the unveiling that the company chose Moeller because of its many public art works, which are installed across the United States.

One of Moeller’s most recent works of art can be found in the Avalon Apartments in West Hollywood.

“Art can challenge our expectations and our imaginations in new ways,” said Grimsley. “Our art was inspired by floral designs resembling a very abstract giant vase. He appears as a great autonomous figure, playful and open to multiple readings.

Grimsley added that Moeller wanted to add a kinetic element to the artwork, which is achieved by the yellow object coming out of the vase and gently spinning left and right.

Friday marked IKEA’s fulfillment of Burbank’s Art in Public Places Ordinance, which requires 1% of the cost of a major project to be spent on a work of art on site or placed in the city’s Public Art Fund, said Marisa Garcia, deputy director of the city’s parks and recreation department.

She added that the Arts in Public Places committee approved the project last January and cost IKEA $ 360,000.

Garcia said she was aware of comments made by the public about the sculpture before it was unveiled and said that works of art like “Bobble” will spark a conversation in the community.

“I don’t disagree that people are upset by the image he conjures up in your mind, but I think now that he’s been unveiled I hope they see him differently and ‘appreciate as an art, ”she said. “If they like it that’s fantastic, but if they don’t like it, that’s okay.”