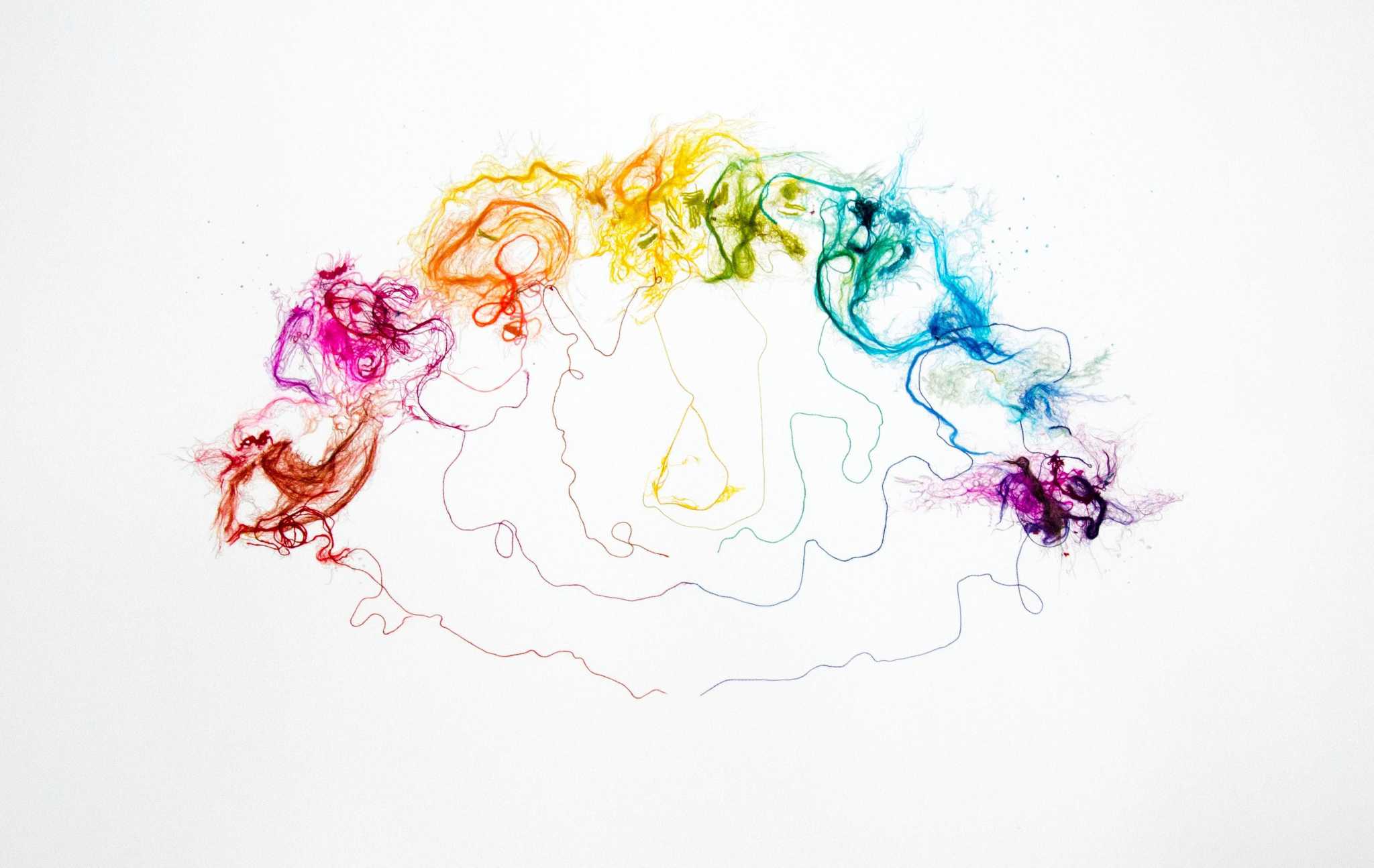 An artist, however, can piece together the threads in a way that reveals them in a new light.

That’s what happens in Emma Balder’s first show in Houston, which features works painted with recycled yarns disentangled from textiles she collects. Not as abstract as they seem, they tell stories that may reflect, say, the metaphor of a campfire as a hopeful gathering of humanity, or how it felt. recently when she moved from Colorado to Houston. The titles hint at what she was thinking when she created them, but viewers could easily see something else, the same way they imagined different shapes in the clouds, she says.

Detached in colored threads fixed with a brush on panels using a matte medium, the works are disarmingly exuberantly beautiful – one of the reasons Balder spoils them a bit with almost imperceptible graphite marks. but important. “It’s also a way to bring more into the composition and negative space and connect everything in the room,” she says.

A graduate of the Savannah College of Art and Design which exhibited her work in the United States, she began her career as a more conventional painter of large abstract expressionist paintings. She started working with Sons about five years ago, during a one-year fellowship with the Vermont Studio Center. A textile artist gave her five bags of waste from a tailor in India. “There was so much garbage,” she says. “These started as studies to inform further work. She cut out large canvases, tried to reconstitute her way of seeing painting and began to incorporate some of the material into it. Soon she collected textile scraps from other artists as well as fashion designers, upholsterers and other small businesses.

Some paintings look like exotic flowers, but the works on the longer wall are figurative as well. Each holds a portrait of a member of her family. The titles “Mother Axis I” and “Mother Axis II” suggest the structure of a flower but also represent its parents, Roberta and Felix Balder. One is more structured and anchored (his father); the other is more loose and open (his mother). They are both more symmetrical than the three smaller pieces that depict Balder and his two sisters, whose lives are still being formed. (Balder is the middle child, “so my arms are outstretched, trying to hold everything together,” she says.)

Balder also makes much larger public art installations. She is currently designing a “very textured and tactile” installation for the collective immersive art experiences company Meow Wolf. Filling an 11-by-12-foot room, it will be open Nov. 22-24 at a special Denver art and music festival – the town Meow Wolf has chosen to build its next permanent facility, a 90,000 attraction. square feet on order from his blockbuster venue in Santa Fe, NM

Balder also has a great three-year gig with PepsiCo, which asked him to create a bottle label for his premium brand of bottled waters LIFEWTR. Its design will debut in January.