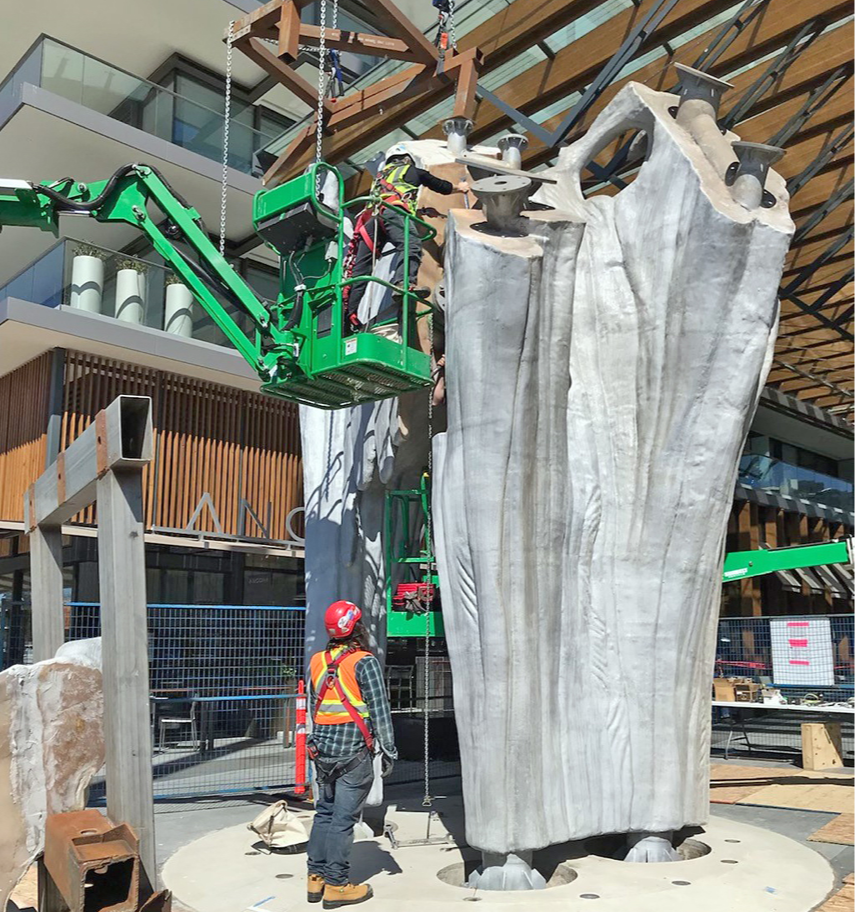 A new public artwork by acclaimed artist, writer and West Vancouver resident Douglas Coupland is about to be unveiled in Ambleside.

Inspired by the beach, driftwood, a perfect day, as well as Coupland’s friendship with the late artist Gordon Smith, “Tree Snag” is currently installed in the public square of the Grosvenor Ambleside building on Bellevue Avenue.

Coupland came up with the idea for the piece – which is 30 feet high and 30 feet wide and weighs nearly 16,000 pounds – several years ago, after seeing a spectacular piece of 1960s fir driftwood that Smith had collected and stored at his residence in West Vancouver.

This week, crews have been busy installing the part, which includes four coats of resin and fiberglass as well as aerospace-grade platinum paint, at the site. The installation should be completed in the coming weeks.

The addition of “Tree Snag” completes a quartet of projects that Coupland started in the Ambleside area years ago, with public art pieces “Float Stack” (2018), “Whale Vertebra” (2018 ) and “Deer Vertebra” (2020) already installed around the Grosvenor Ambleside property.

The entire art series reflects a day of beach digs on Haida Gwaii between Coupland and Smith, where the duo collected derived materials, such as fishing floats and other ephemeral items on the beach. Coupland set out to capture that spirit – as well as the spirit of walking the beach and enjoying Ambleside Beach as a child – when he was approached by Grosvenor for the public art project .

“The concept of walking around and encountering these ‘derivative shapes as if they were on a beach’ is to recreate a favorite pastime for many West Vancouverites – strolling along the shores of Ambleside,” according to a press release for the new artwork.

Coupland, who rose to fame with the publication of his first novel, “Generation X: Tales for an Accelerated Culture” in 1991, grew up in West Vancouver and still resides there. He is also a well-known visual artist who has contributed to public art projects and held numerous art exhibitions in galleries and museums around the world.