The Amy E. Tarrant Gallery at the Flynn has been largely empty since the start of the pandemic. Now the space is so full that it draws passersby gawking at its large windows overlooking Burlington’s main street. What’s there? “Riddleville”, a solo exhibition by a local artist Clark Russell.

The installation resembles a crowded city of towers, pilasters and wall panels bearing hundreds of individual arrangements of abandoned figurines, old toys, scraps and scraps. The work contains so many things, in fact, that it may be more useful to ask yourself what is not the.

Metal platforms that look like branches on the towers and shelves on the panels support intriguing scenarios, each glued into place on a base, or “stage,” as Russell calls it. In one scenario, a small headless model of Auguste Rodin’s ‘The Thinker’ sculpture faces an antique gas mask with perforated glass eye lenses.

Another scene positions two Snow White figurines, one carrying a machine gun, facing two SpongeBob toys, as if to discipline the imaginary boys. In yet another, a model train on one track is bisected by a smaller train, while a stranded turtle watches from below.

Some scenarios – like a plastic cup filled with a deflated plastic globe and a plastic straw – clearly work as commentary on the endangered environment. Indeed, the entire installation captures the overwhelming reality of consumer culture, which threatens to subsume us. Viewers can literally get lost: by going from one scenario to another, it is almost impossible to find the first one. 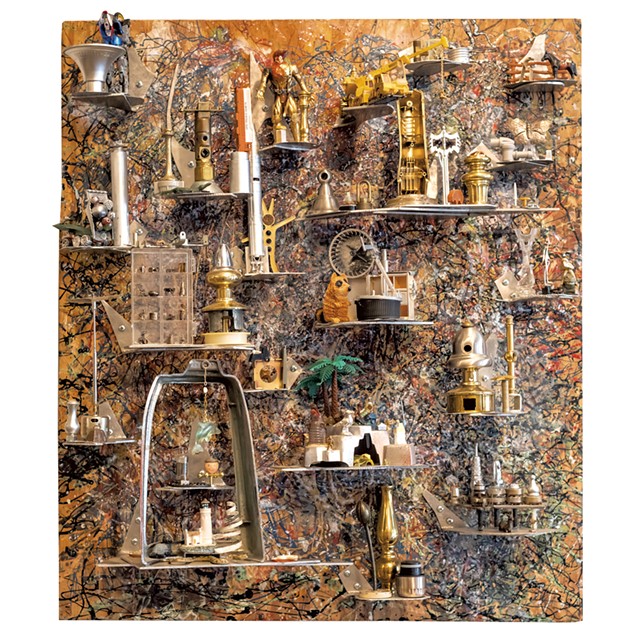 Other scenarios are more obscure. What about a chorus of dinosaurs, sharks and porpoises mounted through their mouths on chess pieces? Or the Joseph Cornell-like box made from a box of metal power nodes containing a sand dollar, stacked bits of hardware, and a tiny male figure working atop a pile?

Even more scenarios just seem to explore abstract relationships between objects. Overturned glasses or cups are topped with parts of light fixtures or vice versa. The curve of a metal pipe connects a pressure gauge to an elegant finial. A large plastic egg eclipses the tiny Eiffel Tower it tops. And, wait, is that a Simon Pearce glass sailboat?

“Riddleville” makes it clear that while consumer culture may hasten the destruction of the Earth, we humans can’t help but love our stuff – even, and perhaps especially, when it’s saved. of the landfill. These Spiderman figures having so much fun blowing up the world recall and ultimately commemorate the captivating games of childhood.

Installed by Russell with help from Flynn producer Amy Harting and facilities manager Andrew Hard, “Riddleville” was still incomplete on the morning of its soft opening on October 6. Russell met Seven days in the gallery that day with a glue gun: He was planning to do 11 more scripts after the interview. His studio and apartment, upstairs in a building adjacent to the Flynn, are filled with salvaged items Resourcefriends and dumpsters.

Russell explained that he started making “Riddleville” in the 1980s, but created most of the installation in the last three years, when COVID-19 prompted many people to serve items from their home. Eventually, as he moved found items on the shelves in his pantry, he realized that the act reminded him of the exodus of city dwellers to the suburbs. Russell grew up in St. Louis, Missouri, a suburb of Clayton, one of 90 municipalities in St. Louis County. For him, the towers represent these suburbs.

The tower closest to the lobby symbolizes the suburb of Ferguson, the artist said. On an eye-level platform, a stocky black figure faces an array of police cars, a reference to the 2014 murder of 18-year-old Michael Brown by police officer Darren Wilson. But Russell admits he lost sight of the municipalities or suburbs most of the towers represent.

Although remarkably talkative and something of a wordsmith, Russell is wary of reducing his intent to language. (He had to force himself to write an artist statement, he said.) Of course, the installation hints at his environmental concerns, as well as his lifelong opposition to racism and misogyny, he said. But he ultimately argued for a sort of “cloud of ignorance,” to use the description of an anonymous 14th-century mystic.

“When I’m creating these scenarios, I’m almost in a dream state,” Russell said. “It’s as much about self-discovery as it is something for others to discover.

“Riddleville” received an exceptionally enthusiastic reception. So many people were trying to see into the gallery at night, for example, that Russell and Flynn’s team decided to leave the interior lights on every night.

Russell is both thrilled and “a bit chagrined” about the attention. For 35 years before “Riddleville” resumed his practice, he made abstract wall sculptures from found and modified pieces of metal, devoting an inordinate amount of time to each composition. Yet these works, which Russell says are “much more dear to him”, never caught the eye of this installation.

Ultimately, he thinks “Riddleville” is a reflection of “how I see the world: it’s a complicated, layered place.” The sculpture, he added, “borders on public service”.

2022-10-19
Previous Post: Art review: bold and courageous Picasso Ceramics exhibition not to be missed
Next Post: Michael Forbes, Black This and Black That. . . a state of emergency, at the Djanogly Gallery, Nottingham