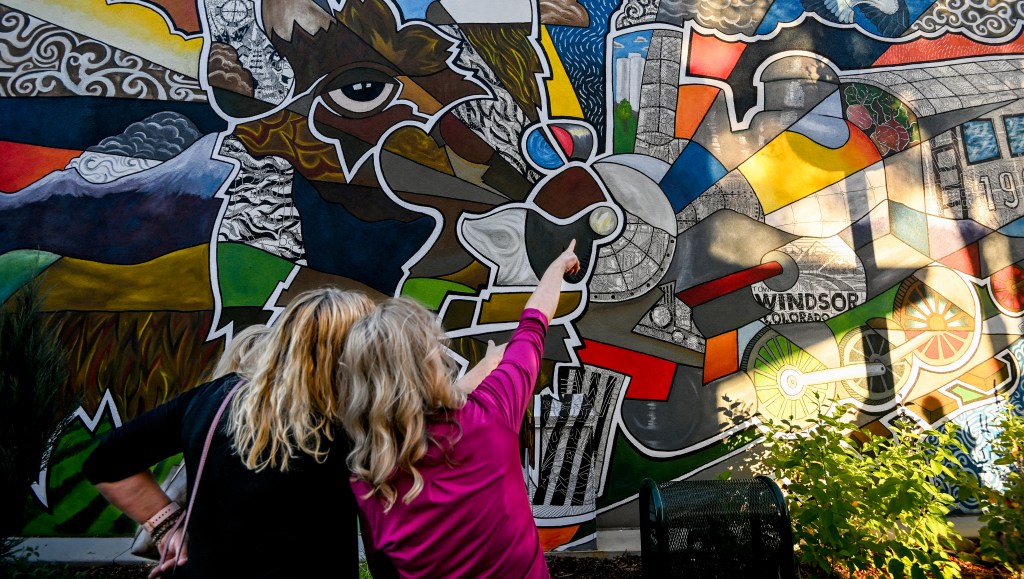 Whatever the medium, all art tells a story. It can be the story of a culture or a community, the story of a particular moment in history or even simply a story based on a feeling or an experience lived by the artist. Whatever the inspiration, artists use their art to convey a visual story.

The City of Windsor recently enlisted the help of Fort Collins artist Chris M. Bates to help the community tell its own story through its first public artwork.

Bates has been an active artist for around 15 years and the Windsor piece is one of around 50 murals he has created. The piece took Bates approximately 180 hours spread over three weeks.

On Friday evening, residents, business owners, staff and city leaders along with members of the Windsor Downtown Development Authority and the Windsor Chamber of Commerce gathered in the small lane outside the 408 Exchange Tavern to cut a golden ribbon signifying the official unveiling of the large “Windsorgins” mural.

“It’s a big day for Windsor and it’s an exciting thing to see come together. People ask me all the time what makes Windsor still feel like a small town and I believe it’s things like that,” Mayor Paul Rennemeyer told the crowd. “There’s going to be a lot more public art coming from the commission. We are really delighted to have him here today.

The mural depicts two of the main attractions that have contributed to the settlement of the region: the bison and the trains.

“The natives stayed here when the bison were here and no one lived here permanently until the train passed,” Bates said. “So I played with those two main themes.”

At first glance at the mural, viewers’ eyes are greeted by bright, vivid colors and thick lines with tiny, intricate details woven throughout the piece. It’s not the kind of mural where you can see everything in one trip or casually strolling around. With all the little details, it takes a while to see all the time and detail that Bates has put into the unique piece.

“I met a lot of people while working on the mural and it’s great to meet people from the community. I like to get involved,” Bates explained. “I’ve been lucky enough to meet people many times and some of the things I’ve talked to people about have worked their way into the mural. My process is kind of organic. I get a glimpse of what I want it to happen, but I want to add the flexibility for the community to inform my process.

The mural pays homage to a variety of elements of the city’s past and present, such as the EF3 tornado that ripped through the city in 2008, the manufacturing businesses in the area, agriculture, area schools, etc

“There is a gentleman who died (in the tornado) and I commemorated him with a headstone that bears his initials,” Bates said. “It has the City of Windsor logo as its main feature.”

The building, built in 1890 by Edwards and Hunt Butcher Shop, has housed a variety of businesses over the decades, including a gun store, insurance company, card store and several restaurants, all also depicted in the mural .

“This event means so much to me, to my family and to the community,” said Jonathan Hitchcock, owner of the 408 Exchange Tavern. “It’s a very exciting time for our community and I couldn’t be more thrilled to be here.”

“I’m really touched by this and it’s such an honor,” added Ashlee Hitchcock, Jonathan’s wife.

While Greeley is well known for its thriving and vibrant community art located throughout the city, Windsor is a relative newcomer to the world of public art.

In 2021, the City Council passed a Public Art Ordinance which paved the way for the formation of the Art Commission. The commission is responsible for selecting all venues, artists and public art installed in the city.

Members of the artistic commission include:

Ken Bennett holds the seat of City of Windsor Board Liaison for the Arts Commission with Culture Supervisor Laura Browarny serving as staff liaison.

“It took a long time to prepare, but better late than never. We may have started off slow, but we’re going to see a lot of things happen very quickly here when it comes to public art,” Browarny said. “I’ve been involved in public art since the very beginning, so to me the finished product is simply stunning.”