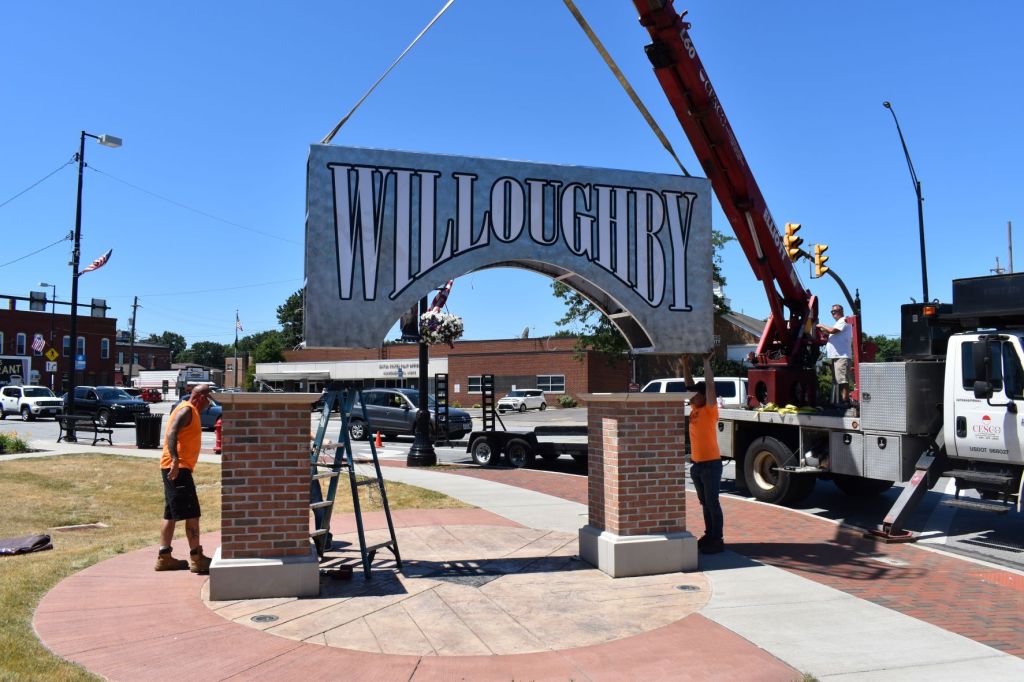 Artist Bill Rigo’s concept of incorporating elements of Willoughby’s past, present and future into a single design has come to fruition at the entrance to historic downtown Willoughby.

According to Rigo, the artwork is titled “The Bridge to the Future of Willoughby”, which takes into account the town’s history and bright future.

The stamped concrete under the structure reflects a millstone in memory of David Abbott, Willoughby’s first settler and operator of a factory along the Chagrin River. The columns are Willoughby brick to reflect the current historic buildings of the town center and the stainless steel arch projects Willoughby’s bright future.

The name Willoughby in the arch symbolizes the trusses of a bridge and the ornate locomotive on top echoes the town’s long-celebrated transport era.

“Willoughby is building for the future without losing sight of the past,” Rigo, who has a long history and roots in Willoughby with his grandparents living in the town and his mother attending Union High, told his over 30s. years of career. at Editions Meister.

He currently holds the position of Corporate Director of Marketing and Visual Communications.

In 2018, a developer was buying the old BP station at the corner of Erie Street and Mentor Avenue to build a new bank. So Mayor Robert Fiala and Director of Economic Development Tom Thielman immediately began negotiating easement rights for a 22-foot corner section of the property for the sole purpose of improving the entrance to the city, as well to build a public square representative of Willoughby’s. downtown.

As a result, the city and the mayor’s new Willoughby Arts Collaborative called on artists to find the best and most creative use for the site, Thielman said. The request called for a place that would inspire, celebrate and preserve the cultural spirit, identity and historical reputation of Willoughby.

“It was important that the artists’ submission beautify the area, engage people of all ages, support iconic themes in Willoughby’s history and contribute to the town’s goal of being one of the most desirable communities of northeast Ohio,” Thielman said.

In response, over 20 artists participated in a pre-submission meeting and site visit, which then generated 11 formal proposals. The town has even attracted out-of-state attention and an international submission from a world-renowned Australian sculptor, Thielman said.

Of the 11 candidates, three were selected for individual interviews and presentations.

“What became evident early on is that the artist community has no shortage of talent and interest in creating public art,” he said. “What there is, and this is our challenge, is that the city and the Arts Collaborative need to identify enough sites and funding to tap into this enormous amount of creativity.”

The town has established the Willoughby Arts Fund, which collects a small levy added to new developments in the town and held in an account specifically for future public art installations. Additionally, the Arts Collaborative has been granted non-profit status and accepts charitable donations of any size to advance the arts in the city.

After two rounds of judging by the Arts Collaborative, using criteria such as artistic merit, concept presented, use of space, suitability, scale, suitability for the community, construction, materials, maintenance and the “wow factor”, “The Bridge to Willoughby’s Future” was chosen.

“I felt a strong urge to do something,” Rigo said. “The first three of us did presentations and they kind of picked my design. That was about three years ago. There were some delays in getting funding, and then (coronavirus) slowed us down for about a year. Couldn’t be happier with how it turned out. It shines just as I hoped.

The bridge, through the Arts Collaborative and the city, was privately funded. In addition, Marous Brothers Construction participated in the artwork through its financial contribution to its construction work.

“They helped tremendously,” Rigo said. “Their gift was all the ground work, pulling the electricity and putting up the brick pillars, and the sand, the concrete pad. We have offered the best piece to a few sign companies and have worked with Cesco Imaging in Ashtabula over the past few years to get the best.

Willoughby is beginning to plan an official ribbon-cutting and dedication ceremony to take place in the coming weeks.

“We will be working on fine-tuning the operation of advanced lighting systems throughout the bridge,” Thielman said. “It really is a bright future for Willoughby.”