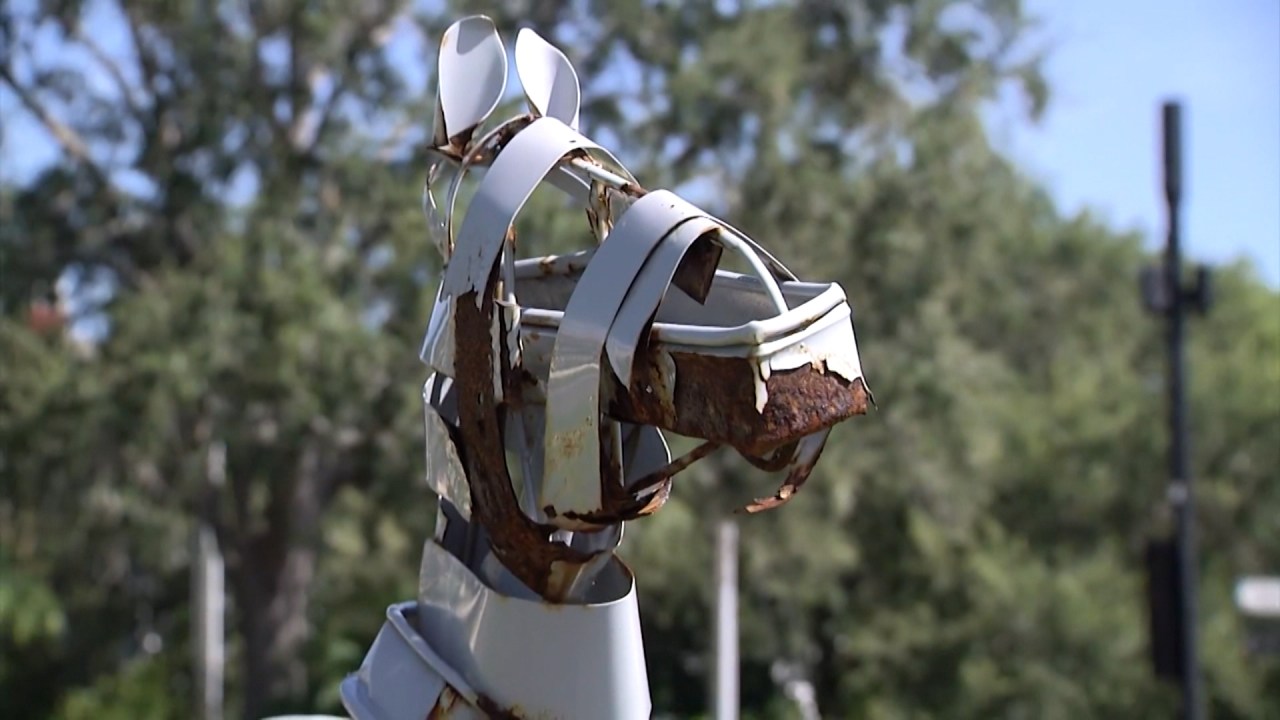 Bayshore Boulevard artwork in danger of being tossed

TAMPA, Fla. (WFLA) – In the middle of Bayshore Boulevard is a public artwork titled “Equanimity.”

The art is a group of sculptures made of strips of metal shaped to look like horses.

The sculptures were created by artist Bud Oleson and they have an interesting history.

The sculptures originally stood outside the Tampa Museum of Art but were stolen.

For ten years, no one knew where the sculptures were until an anonymous call came through to the Tampa Police Department stating where they were.

Eventually, the sculpture was recovered and placed in its current location.

Time, the elements, and an apparent lack of maintenance by the city have resulted in rust and rot.

One of the horses in the group rusted so much that it collapsed under its own weight.

James Oleson Jr. is the grandson of Bud Oleson and works as an artist in the footsteps of his grandfather.

“Most of my inspiration, when it comes to metal sculpture, comes from my grandfather. So I saw that growing up, I do a lot of horse work. I saw my grandfather’s horses grow,” Oleson said.

Little did he know that his grandfather’s horse carvings had deteriorated so badly.

“It’s a shame this one is in such bad shape, especially since it’s owned by the city,” Oleson said.

A City of Tampa spokesperson said a restorer in the city recently inspected the art and found it would be too expensive to repair.

No one had contacted James Oleson to find out if it could be fixed.

“I myself would be able to go back to its original state and make sure there was enough structure inside to make sure it could last forever and then paint and finish and everything so that it always looks good,” Oleson said.

He says that with just a little prevention, the problem could have been avoided, to begin with.

“The only maintenance it needs is like a coat, once a year just to bring the rust to a limit and keep it from continuing to rust,” Oleson said.

The City of Tampa says no final decision has been made on the art’s future.

2022-09-07
Previous Post: Art piece: a reminder that diversity is “a work in progress”
Next Post: New artwork as part of BBIA’s Street Art project