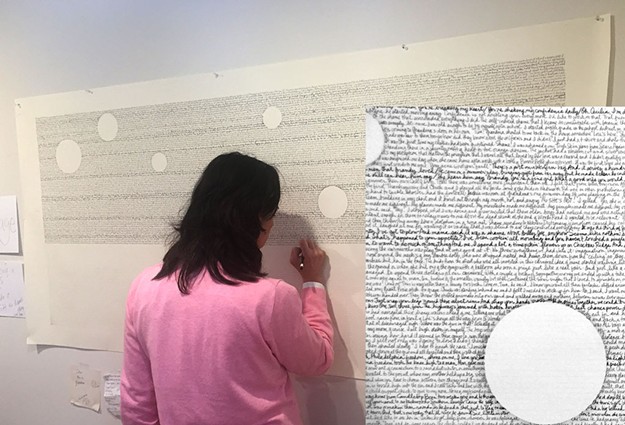 Upon crossing the front door, visitors to Studio Place Arts in Barre generally discover multimedia collective exhibitions with works hung on the walls or the ceiling, or perched on pedestals and plinths. Current example: “Deep Blue”, with works inspired by water and ocean life. But viewers shouldn’t overlook the galleries on the second and third floors.

The SPA floor is a different world, with each floor typically featuring a single performer in its narrow hallway. Based in Burlington Therese Celemin‘s “Works on Paper” currently occupies the third floor space. Seeing this exhibition is like visiting a workshop. Dozens of small drawings on notepads and post-its hang from gold clips on a wire stretched along both sides of the room. While interesting on their own, they are perhaps most useful for the insight they give into the artist’s process. Celemin’s sketches summon the imaginary worlds of Lewis Carroll or a science fiction cartoonist.

Eight large, meticulous graphite drawings are the counterpoints to these sketches. The largest, the 73-inch by 36-inch “holes in my childhood” covers most of a wall. Celemin’s sketches are not studies for these larger works, but one can see a progression from them to his more fully realized images, as well as the emergence of themes.

The third-floor gallery consists of a long hallway and a staircase outline, but somehow seems to encompass more. Maybe it’s because you have to walk around the stairwell to see one of Celemin’s drawings from afar, then come back to see the details up close. Or maybe it’s because the tight spaces almost require the viewer to engage closely with each work. The gallery is both intimate and claustrophobic, creating a forced account with each artwork.

The 72-inch by 13-inch “Front Row Fashionistas” depicts 13 seated women (although no chairs are visible) facing forward, as if waiting to be seen on camera. The proportions resemble those of a cartoon: their body consists of approximately 50% head, 50% legs, with arms and hands close together and no torso. The oversized heads and big eyes are almost comical.

Celemin ensures that women appear poised, relaxed and relaxed, while being completely aware of their appearance. She seats them in pretzel-like gyrations (legs crossed or bent to the side, or squeezed tightly from the thigh). These women could be the editors, celebrities, and trend setters who sit front row at fashion shows. The characters are disturbing and captivating, powerful and casual, sexy and untouchable. Celemin’s pencil is sharp in its execution.

ABOUT THIS GRAPHITE PENCIL: This may be the only artist’s tool that all viewers have held and used. Crayons are used in elementary school for writing letters, in high school for scribbling in notebooks. Adults can use them to doodle on cocktail napkins or post-it notes, take notes, to-do lists or sketch ideas. We all know the function of a pencil and its limitations.

Celemin knows no such limits. It’s a world to be drawn and erased, obsessively enlarged and constructed, line by line – and, in some works, word by word. The resulting works are revealing. 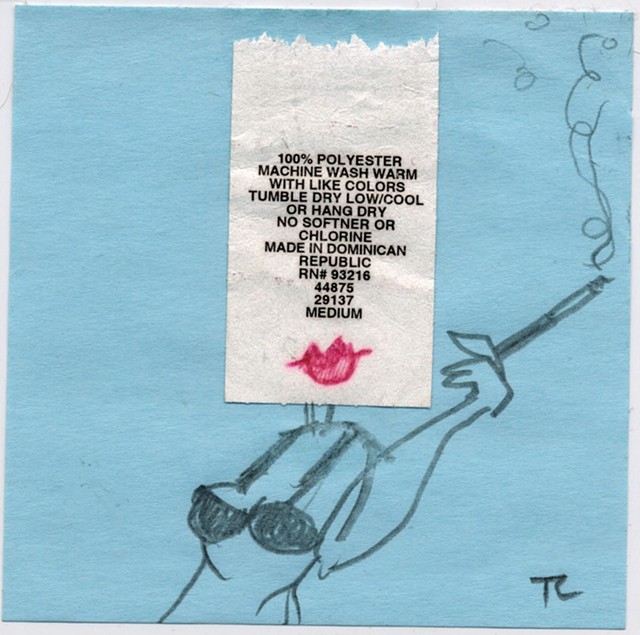 Celemin was born in the Philippines and raised outside of Syracuse, NY She writes that when she was 8 or 9 years old, she learned how to draw fashion illustrations from an old correspondence course her grandmother had followed. Later, she drew the models of Seventeen and Charm magazines.

At 17, she won a blue ribbon at the national competition now known as the Scholastic Art & Writing Awards, and her work was exhibited at the Corcoran Gallery of Art in Washington, D.C. Celemin received a BFA in Illustration from the Parsons School of Design and an MFA from the New York Academy of Art. Her drawing skills are masterful, but the fashion influence of her younger years shines through. Her faces also, intentionally or unintentionally, resemble Margaret Keane’s “Big Eyes” drawings from the 1960s.

Much of Celemin’s work draws on her own struggle, as a woman and an artist, to combat her inner critic. For artists in particular, this voice can be deafening to the point of inhibiting creation. Some use their art to break through and overcome criticism. In Celemin’s case, her pencil functions as a pole to propel her to the other side, producing a finished drawing that conveys a sense of accomplishment.

Sometimes she is less successful in this endeavor, going too far in a confessional mode. Perhaps the most disturbing example is “Sometimes I Really Can’t Stand Myself”, in which Celemin describes himself punching himself in the face. Behind her is a wide field with a low horizon and a sky full of cumulus clouds. A chicken nearby looks as if reacting to the idiocy of his act. Celemin describes the standoff with his inner critique and how it unfolds in his accompanying artist statement.

The cramped writing is the most important part of “Holes in My Childhood.” Long lines of text span the full 73 inch width, top to bottom. Thirteen blank white circles of different sizes divide the text. These negative spaces are scattered across the design in a seemingly random fashion, creating a strong composition.

Some of these written lines are bolded song lyrics; others are autobiographical statements. Celemin’s writing provides a voluminous backdrop, perhaps ripe with its own references. But most interesting to the viewer is how the words create a wonderful ripple of undulating graphite.

At one end of the stair railing, a table holds a small black notebook, which Celemin calls “The Book of Half-Wives” on his website. Each page contains one half of a woman’s face, with the other half on the back.

The notebook offers an intriguing look at the two sides of a face, and the multiple faces of women. It is also an opportunity to hold and closely observe the detail of each drawing, to see how a pencil in the hands of an artist can bring simple lines to life. And that, after all, is the point.