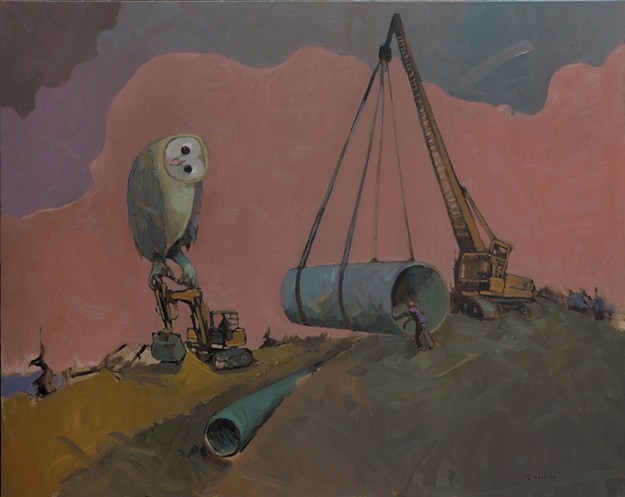 The disconnection between humans and other living creatures is not a new theme, nor is the precipitous destruction of the planet by mankind. Along with scientists, philosophers, politicians and writers, artists have long approached the pride of people motivated more by profit – or at least convenience – than conscience. In this area, we seem to give unequivocal authority to critiques of indigenous peoples: We once lived in harmony on this land. Look how you screwed him up.

Travis Shilling is a Canadian Ojibwe. His exposure to BCA Center in Burlington doesn’t point to a particular “you” culprit – after all, complicity in consuming modern life is widely shared. However, “Tyrannosaurus Clan” includes 11 oil paintings on canvas which mainly depict workers and their excavating machines digging canals in the ground to lay pipelines.

In a literal sense, the paintings can be read as a response to the bitter and protracted conflicts over pipelines in Canada, particularly between the government and First Nations people. Shilling paints the ground and the sky in dark hues, as if associating the digging with nefarious intentions and ruinous effects. 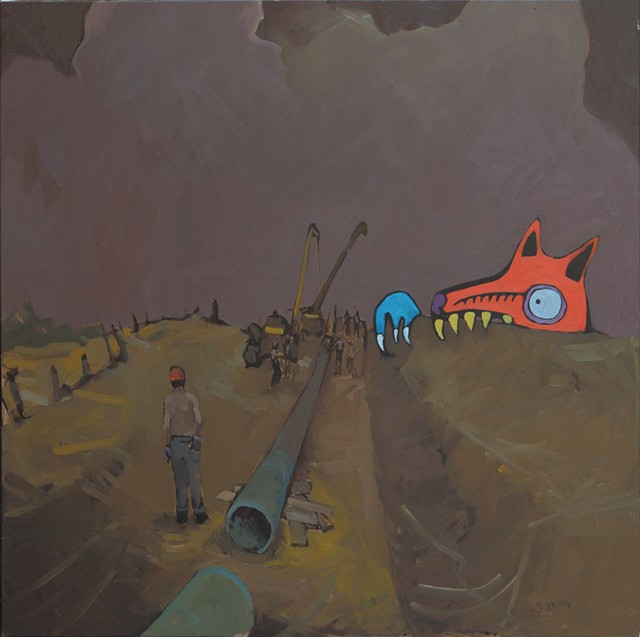 Contrasting with this decor, the symbols of spiritual animals that the artist inserts into the scenes, rendering them in a colorful, lively, rather cartoon style. These birds, fish, dogs and more seem curious and incredulous, as if wondering, What do you think you are doing?

Are these primordial animal spirits, “awakened” by the destruction of the earth, making a last ditch effort to sound the alarm bells? Or do they embody a deeply painful cry from and for the desert? Maybe both. “Tyrannosaurus Clan” is a kind of exegesis on the impact of industry, if not on human evolution itself.

Shilling, the son of Canadian Indigenous artist Arthur Shilling, has been acclaimed for his paintings that evoke natural and man-made environments. Born in 1978, the youngest Shilling has exhibited since the age of 21 and is also a playwright and filmmaker. 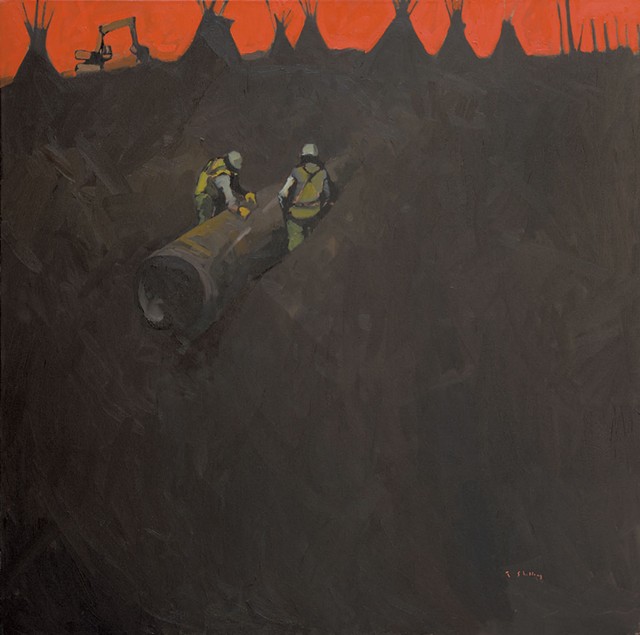 The paintings in his exhibition at the BCA Center represent a new direction, and a sharper direction. The intention of Shilling is obvious, but it’s not just their content that makes these works of art fascinating. They succeed in part thanks to the striking juxtaposition of artistic styles: the contemporary and slightly abstract realism of Shilling with his bold and juicy brushstrokes contrasting with his vibrant pictographic symbols. In their simplicity and clarity, these seem to rest like judgments – or beacons? – on these dark landscapes.

Yet the humans in these paintings are oblivious, as if the native symbols were only visible to viewers. In “The Village”, a 48-by-60-inch oil painting, men with cranes place a large pipeline in a canal. Next to them hides a huge creature with an ambiguous taxonomy: reptilian body, wood head, clawed feet, a row of spikes in the back. The animal’s body is brightly painted with a pair of teepees, a full moon, and other symbols. Her visible eye is huge and pink.

Shilling embarks on offshore drilling in “West Coast Visitor”. Here, the contrast between the grim reality and the spirit animal could hardly be more pronounced. The angry sea, towering platform, and monochrome sky are rendered in a tightly chromatic palette of grays, rust and brown. The symbol of the fish hovering to the right of the rig, as if it were in a parallel dimension, is yellow, bright green, purple and blue.

In “Under Water”, a diver holding a spear floats in a vast, indifferent brown sea. He seems unaware that the spirit of the whale-sized fish is following him closely, its mouth opening to reveal rows of razor-sharp teeth. It’s the only creature in Shilling’s collection that looks genuinely threatening. 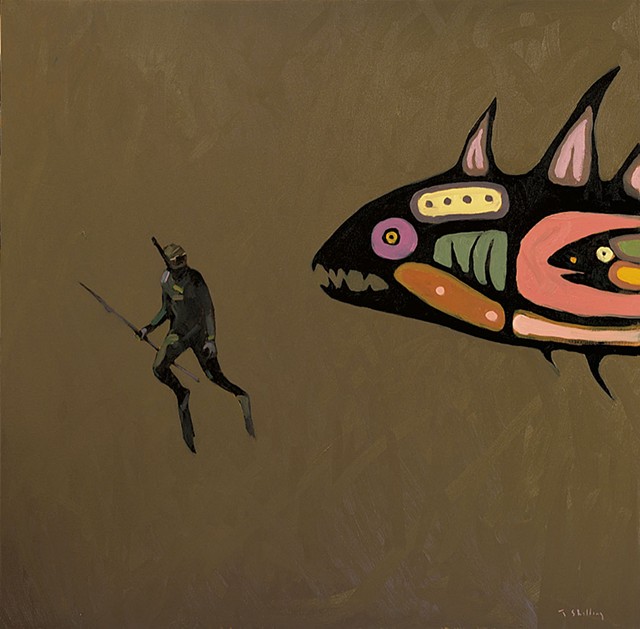 The subject of “Owl” is downright cute. But then, owls are still cute – although we have to anthropomorphize this one as sad. Perched atop an excavator, whose size it eclipses, the hapless raptor turns its head 90 degrees to the side. It’s an air of confusion, as the owl witnesses the installation of another pipeline. The wide sky is an unnatural but beautiful salmon pink.

The 36 x 36 inch “Partridge Hunter” is perhaps the only painting here in which the human is aware of the spirit animal – and he is trying to kill it. The hunter stands in a wintry field with his back to the viewer, pointing a long gun at a bird in the sky. The bird, dark gray with turquoise-tipped feathers, lifts both wings like a conductor. Yellow earthmovers dot the distant horizon, a team of predators.

“The Shoreline”, also 36 square inches, is much more ambiguous in content and amply demonstrates the pictorial technique of Shilling. A man with indistinguishable features sits in front of a small campfire, which glows yellow and emits a puff of smoke. He seems to ignore the gigantic woodpecker warming his butt over the fire while turning his red head away. Most of this painting is pitch black. But the gallery lighting reflects Shilling’s long, smooth brushstrokes – tangled layers that transform the night sky into an ebony boreal.

Shilling calls “Travelers” his “seed to seed” – the image from which future work evolved. The smallest work here, at 20 by 24 inches, is a colorful group portrait of four spirit animals, each a hybrid species except for one large orange fish. Their collective expression should be qualified as bewilderment. Many Earth humans can identify with each other. m

2020-01-08
Previous Post: Ceramics and Abstracts with Fiona Waterstreet and Dorothy Hood at the McClain Gallery
Next Post: National Art Shop celebrates 50 years as a family business