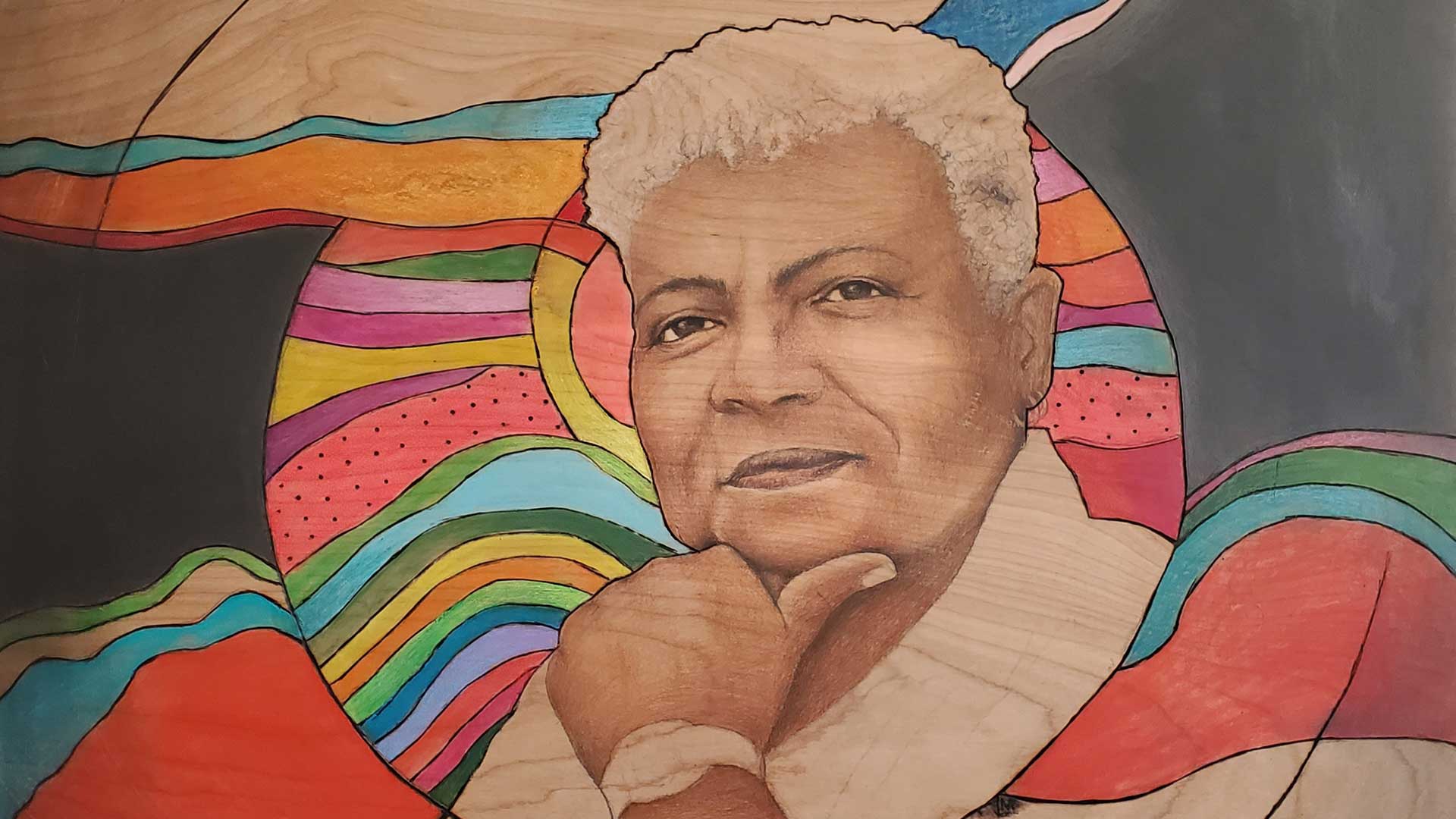 In a career that spans nearly 50 years, Queen Brooks has exhibited her work nationally and internationally. She received praise from writers and critics while winning all sorts of honors and awards. Combine that with her teaching career and public works, and it becomes apparent that Brooks has a resume that compares favorably to any artist working today.

This list of accomplishments, as impressive as it is, only tells part of Brooks’ story. For what is made clear in the exposition Touching… Recognizing the artist Queen Brooks is that the artists that Brooks has mentored, inspired, and helped nurture are what make his career truly remarkable.

Organized by Janet George, Moving… features a selection of Brooks’ own works as well as pieces by many artists who consider themselves Brooks’ mentees. Lest we underestimate Brooks’ influence, these artists constitute a veritable “who’s who” of Central Ohio creatives. The result is an exuberant exposition; one that is equal parts community potluck and family reunion with artists throughout Brooks’ career coming together to celebrate an individual who has become a touchstone to so many.

This format is perhaps even more appropriate given the particularly tight-knit and multi-generational history of art and artistic creation within the black community of Columbus. From the ACE Gallery and the William H. Thomas Gallery to the Streetlight Guild and the Maroon Arts Group, the need for grassroots support and encouragement has helped foster a thriving art scene that continues to grow. Brooks herself credits famed photographer Kojo Kamau and multimedia artist Barbara Chavous as mentors to her early in her career.

Brooks described her palette as cheerful, and the same could be said for this exhibit. There is something vibrant and affirmative about this collection of works. It’s as if the artists themselves understand that acknowledging Brooks really means acknowledging his sense of optimism and joy. by Lisa McLymont Ode to the Queen features a warm, almost blissful likeness of Brooks framed in exactly the kinds of vibrant colors and patterns the artist herself might use.

This same exuberance is found throughout the exhibition. Whether in the kaleidoscopic whirlwinds of As if by Elise Sanchez, the vibrant splashes of color Jaiper Dream: Summer Garden by Nicholas Hill, or the saturated blues of Dreaming of the city by Loren Bucek, color and pattern find their place here.

It’s fitting too, given the place these two elements play in Brooks’ works. She uses both color and pattern intentionally and to great effect. These are works that constantly create tensions and find balance. Patterns keep otherwise stormy colors from sliding into disharmony, and stormy colors ensure patterns don’t become predictable placeholders. This approach tempers the abstraction of Brooks’ work with the hint of hidden language or code. It is not formalism for formalism’s sake. No, these works go further than that, touching on something contemplative and even spiritual.

And on that note, here’s something spiritual to consider. Perhaps this craft of making art, of being creative, of expressing oneself is not really meant to be the domain of the solitary genius or the author or the singular voice of a tortured soul toiling in isolation. Maybe making art and finding our voice is something we’re meant to do together. Perhaps the value of what we create lies in what we inspire others to create. If so, then let’s recognize that Brooks is here to show us the way.

Touching… Recognizing the artist Queen Brooks is currently showing at Carnegie Gallery of the Columbus Metropolitan Library until October 14.