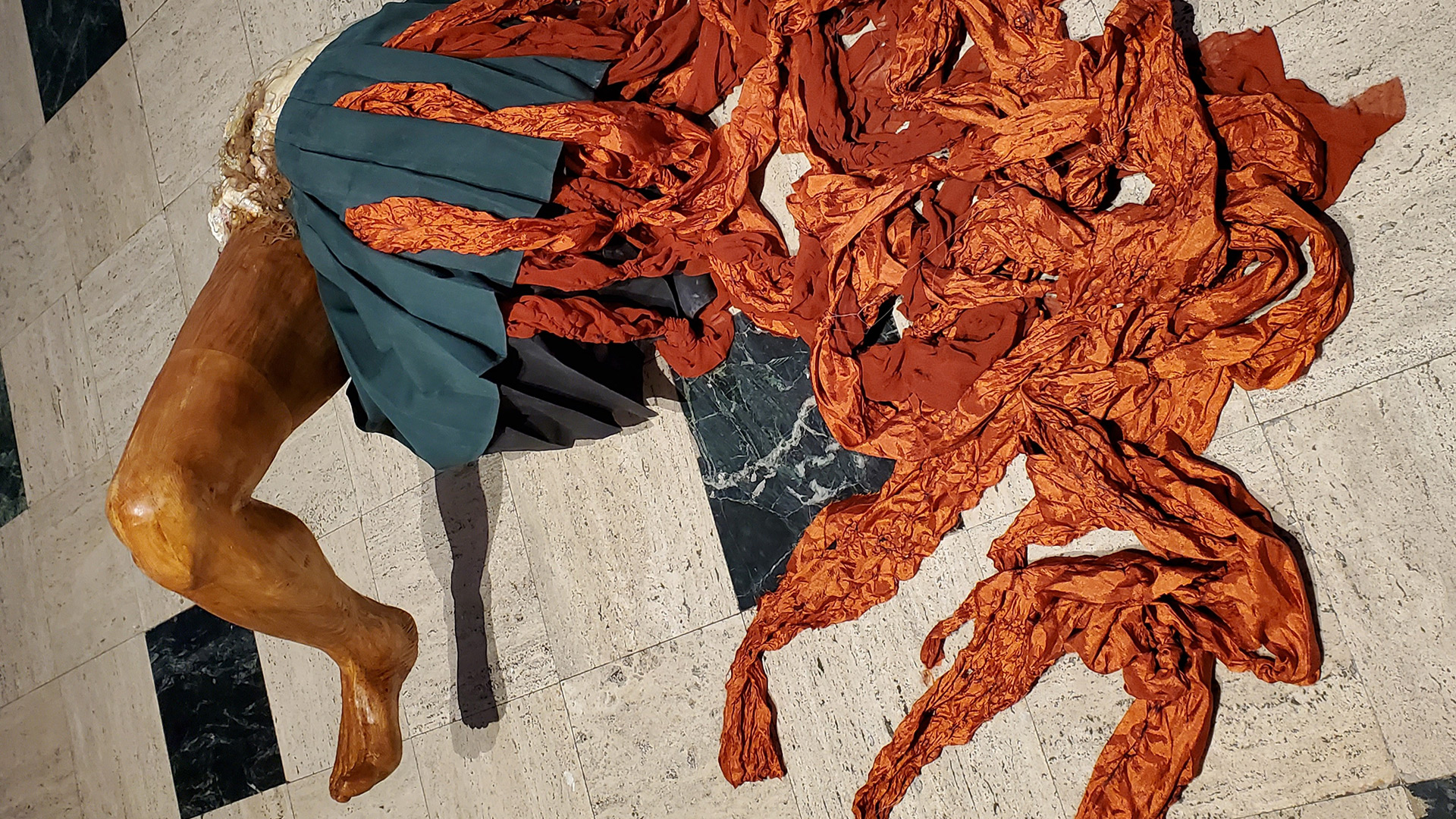 “The task of perception is to pulverize the world, but also to spiritualize its dust.”

-Gilles Deleuze, The Fold: Leibniz and the Baroque

Through a range of mediums, from video to sculpture to painting and drawing, Ouyang dismantles a slice of the world and asks viewers to find greater meaning in the resulting parts. It is an exhibition that draws attention to our bodily nature, while seeking to elevate our consciousness far beyond the merely physical. And if that sounds a bit like religious art and relics from the medieval and Renaissance period, that’s a potentially fair comparison.

It is perhaps natural to think about Scorn of God (Quinn) and Kick Madonna (Crystal) and make connections to the relics and reliquaries of long-dead saints. The organic nature of the materials (which includes bones, horsehair, oyster shells and beeswax), combined with their fragmentary nature, serves to evoke a sense of something both decaying and preserved. .

Similarly, the blue/green and red fabric used in Scorn of God (Quinn) would look perfectly natural on a Renaissance Madonna. (See Raphael Madonna of the Goldfinch or at Luini Madonna of the Carnation.) Similarly, the soft blue and white fabrics featured in Kick Madonna (Crystal) recall the color palette made famous in the glazed terracotta sculptures and reliefs of Lucca della Robbia. As for the somewhat disturbing nature of both works, I would say they are well in line with (and no more disturbing than) those of Donatello. Penitent Magdalen or from Grunewald Altarpiece of Issenheim.

Sure, three betrayals was not staged for those of us so disposed to ponder the stylistic trappings of Renaissance art or the desiccated morsels of dead saints. Ouyang is on to something more personal and therefore larger than that.

single channel video three betrayals takes place in the main gallery and interweaves the choreography of Lu Yim and Eloise Deluca with excerpts from family films, conversations, texts and stories. As if setting off ripples in an otherwise still pond, fragments of the video manifest in the works throughout the show. The flowing fabrics and pleated skirts of Yim’s dancers are taken up in Scorn of God (Quinn) and Kicked Madonna (Crystal). A tattoo that appears during a conversation overheard on a sofa reappears in Betty (Selfie Relapse). The poet Anne Sexton materializes in grainy black and white film in the video projection, then again three times in a series of austere portraits. Ouyang packed a lot three betrayalsand in this sense, the video of more than 40 minutes serves as a touchstone (Rosetta Stone?) to the entire exhibition.

It’s largely because there’s something very candid and open at work in the video; weaving family history with questions and memories in a way that is personal without being strictly narrative. That these intimate passages alternate between choreographies featuring intertwined dancers trying to make sense of the space they inhabit (and each other) adds a physical urgency to the question of finding our place in the world.

Ouyang’s two-dimensional works add an element of grounding to three betrayals which is essential to the general rhythm of the show. Their juxtaposition to sculptures and video offers viewers the opportunity to recalibrate and reorient themselves via the familiar. At the same time, these works reinforce the thematic scope of the exhibition. They also serve to highlight the breadth of Ouyang’s considerable talents and convey that the figurative and the conceptual can indeed work together. Plus, it’s still refreshing to see an artist willing to embrace a range of visual tools and mediums rather than get sucked into a particular look or style.

In this regard, be aware that the interdisciplinary nature of three betrayals can be intimidating. It is an exhibition that is largely inspired by art, art history, dance, philosophy and literature. It is also a deeply personal exhibition. In this regard, three betrayals keeps its viewership high. He expects us to pay attention, connect, seek to understand the experiences of others, and be open to exploration. Those who take the time to do so will find there’s much to appreciate in Ouyang’s skillful pulverization of the world.