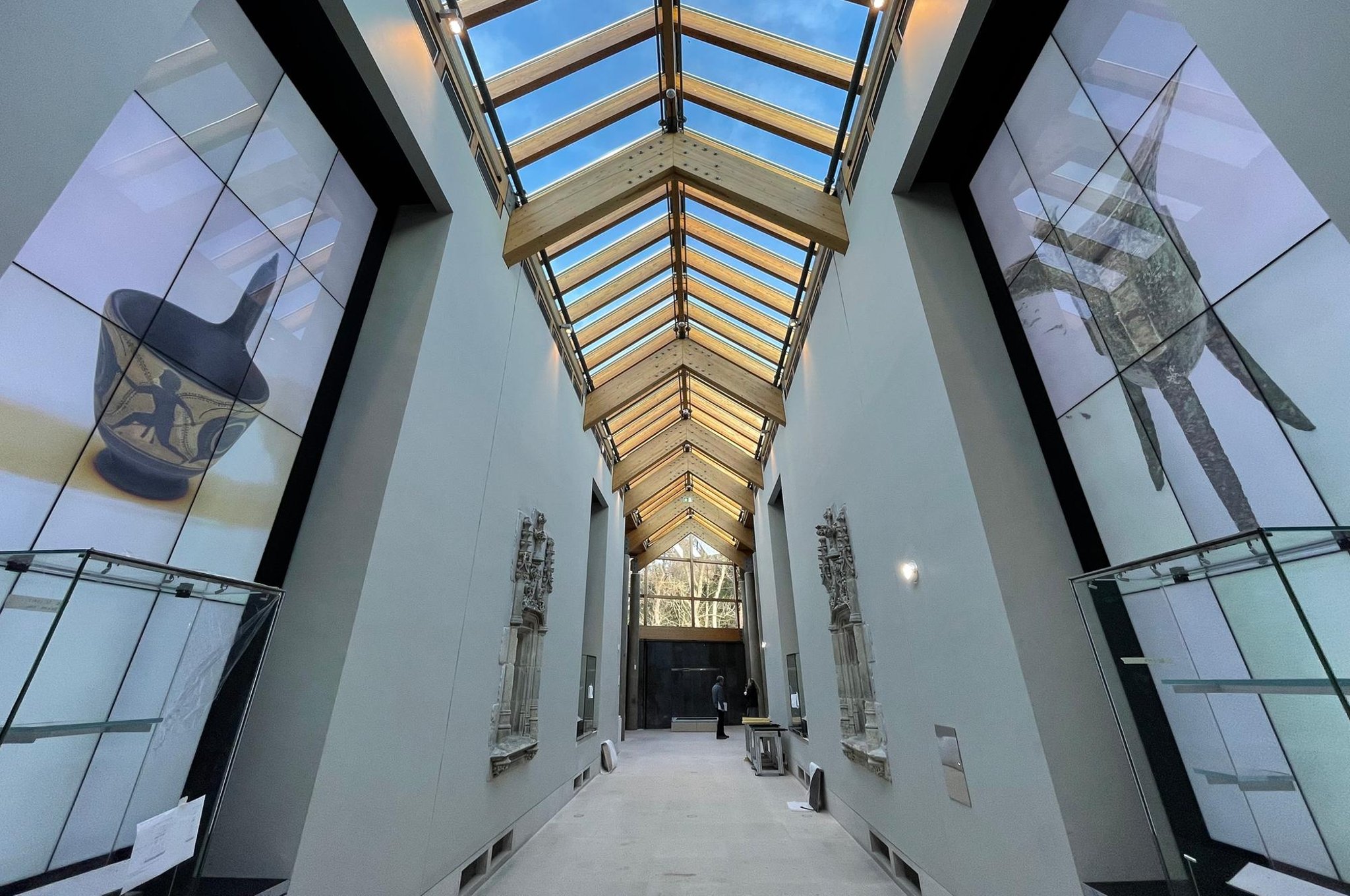 By: Marlene W. Glover
In: Art review
The new Burrell collection will be open to the public on March 29.

On March 29, the Burrell Collection reopens after a £68.25million refurbishment and six years of closure. The operators of Glasgow Life hope the new Burrell, repaired, relocated and fitted out for the 21st century, will rekindle interest in the collection and attract a new generation of visitors.

Shipping magnate William Burrell and his wife Constance donated their collection of almost 9,000 objects to the City of Glasgow in 1944. It was described at the time, by the Principal of Glasgow University, as ” one of the greatest gifts ever given to a city in the world”. He also left money to create a purpose-built museum, eventually designed by Barry Gasson, John Meunier and Brit Andresen and opened in 1983, an eerie and wonderful blend of Scottish baronydom and light-infused modernity, blending into the park’s landscape, it attracted millions of visitors in its early years and is considered an important base for the city’s cultural renaissance .

In 2016, however, the building needed a lot of TLC. The renovation, by architects John McAslan + Partners, replaced the roof, glazing and cladding, heating and lighting. It has improved visitor facilities and carbon footprint. A central atrium was created for events, with a grand staircase descending to the lower level. The display area has been increased by approximately 35%.

Burrell’s collection is a treasure trove of art, antiquities and precious objects: Chinese porcelain, Islamic carpets, 19th century paintings, medieval architectural fragments, stained glass, weapons and armour. It is not suitable for a linear and chronological display; it’s more of a cluster of constellations of world-class objects shaped by the interests of one man.

At the time of the original opening in 1983, one newspaper described a visit to the collection as a “magical and mysterious tour”. Around a bend you may find one of the following: ancient Egyptian grave goods, a display of 15th century drinking horns, a Greek statue fragment, Henry VIII’s bed and Anne de Clèves, embroideries from Uzbekistan, Le Penseur by Rodin.

The original design made it a virtue, with its entrance through a medieval stone portal. Today, this is considered too ecclesiastical, not accessible enough; the entrance is modern and glazed. Two of the three recreated rooms in Burrell’s home, Hutton Castle, have also disappeared, having performed poorly in visitor tracking. The redevelopment relied heavily on public consultation; sometimes, we fear, too strongly.

The exterior of the new Burrell Collection PIC: Glasgow Museums

Once inside, the building beckons visitors through another medieval archway, into a long hallway with the gift shop on one side and a display of stained glass on the other, resplendent against the south-facing windows. One of the functions of renovation is to better control the light, using it where it is needed, for example on stained glass windows, and carefully controlling it where there are fragile pieces such as textiles.

Take a left at the end of the hallway and you find yourself in a light-controlled area, home to Burrell’s stellar collection of Persian tapestries and rugs, the star of which is the Wagner garden rug, one of the oldest examples and the best preserved of its kind, given its own horizontal display. New digital presentations support it, as they do for exhibits throughout the museum, though they are rarely intrusive.

Passing 15th-century Dutch and Flemish tapestries, 18th-century glass and porcelain from the Qing dynasty, you reach the “Walk in the Woods”, a flowing “forest” of carvings on the north side of the building among where visitors can wander around, while floor-to-ceiling windows seem to merge the space into the woods of Pollok Park beyond.

This is where the Burrell’s “magical mystery tour” quality is at its peak, where you can also come across a bust of Amenemhat III, an Italian alabaster Pieta, a Ming dynasty earthenware warrior or the Jeanne of Arc by Rodin. Magnificent and priceless things lie in casual splendor waiting to surprise us at every turn.

Shipping magnate William Burrell and his wife Constance donated their collection of almost 9,000 objects to the City of Glasgow in 1944. It was described at the time, by the Principal of Glasgow University, as ” one of the greatest gifts ever given to a city in the world’. PIC: Jane Barlow/PA Wire

A word must be said here about labelling. For the sake of accessibility, the choice was made to pitch different groups of objects to different audiences (including children), without signaling any change of course. It may therefore be surprising to read the label on the head of a Babylonian lion from 2000 to 1600 BC in search of its history, and instead read “Can you make a scary face like this? ” We pity the person who had to write the label which explains, delicately, what a eunuch is. And the label for Rodin de Balzac’s bust presents the subject as “a French author who wrote about daily life which can be ugly and cruel”.

This raises questions: how much accessibility is needed? To what extent do these objects – many of which are strange, old, beautiful – speak for themselves? Is it possible that overzealous labeling is getting in your way? That said, there can be no diminishing of the quality and impact of what is here.

Paintings have more space and prominence in the new Burrell in double-height rooms in the center of the building, though the installation doesn’t always serve them well. Smaller works (which many of Burrell’s paintings are) seem to huddle for warmth on these towering walls. Many (not just those aimed specifically at children) feel like they’re too low.

They are arranged in small thematic groups: portraits of children, characters reading, the color blue, the male gaze. A series of flower paintings, including Fantin-Latour, Peploe’s Pink Roses and one of Manet’s exquisite flower studies towards the end of his life, are mounted against a bustling wall of dancing flowers which greatly distracts the works themselves.

But you have to focus on the work. Degas and Daumier, Chardin and Courbet, Rembrandt and Franz Hals and Giovanni Bellini have a lot of power to captivate an audience. When you have a work of this magnitude, the main thing is to present it and not get in the way, which (animated wall aside) the collection manages to do.

Further on, a splendid room celebrates Burrell’s collection of modern art, with paintings by Whistler and Sisley, a dreamlike evocation of Venice at Night by Arthur Melville, and works by the Glasgow Boys Lavery and Crawhall (a particular Burrell favorite ). In this room, Meum with a Fan by Epstein and The Wave by Rodin show that he made adventurous choices in sculpture.

Other rooms take more creative approaches. In one, Chinese ceramics classified by color – white, yellow, red, blue and black – with explanations of the meaning of the colors. It looks stunning and can only be had in a collection like this that has riches to spare. Another depicts the traditions around death, with ritual bells from China, an Egyptian burial boat, and figures, vases and paintings from Egyptian tombs.

The first floor galleries are organized by craft, with films showing today’s artisans working with traditional methods, tools and samples that visitors can touch. But these are more than just interpretation; each includes significant examples from the collection, from stone carving and carpentry to lacework and ceramics. There are, in fact, treasures everywhere.

Post-renovation, the Burrell building is a little more functional, a little less enchanted. But a lot of the magic is in the objects. We could quibble over some decisions, but the bottom line is this: the Burrell is extraordinary. It’s quirky and weird and full of richness. Go see him. Everything else is secondary.

A message from the editor:

Thank you for reading this article. We are counting on your support more than ever, as the change in consumption habits caused by the coronavirus has an impact on our advertisers.