Just as realism is frequently affected by the fantastic, abstraction is rarely total. Even non-figurative art is made of materials, and these materials often carry strong connotations. Art House Productions calls its new show abstract spirit forms, which suggests a private, insular experience, something calm, detached from the rhythms of the practical world. Yet this exhibition, which runs until December 1 in the small but beautiful gallery of the Art House, is anything but.

The two artists of spirit forms make work that makes an emphatic gesture towards the audience – work that, while abstract, feels deeply engaged with external forces. It is art that takes the viewer by the arm; he has things to show you, and once he grabs you, he doesn’t let go easily. If you feel the need for a pop of hot pink to brighten up cold November days, head to 262 17e Street between Jersey and Coles. (The opening reception for spirit forms is Saturday, November 2 from 7 p.m. to 9 p.m.) 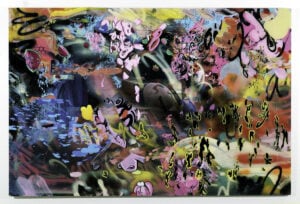 While their parts would never be confused with each other, Meir Srebriansky and Geraldine Neuwirth share some crowd-pleasing trends: bold use of color, impressive scale, swirling lines, layering of materials, and a driving determination to break the flat, two-dimensional plane. If these are spirit forms, the spirits that spawned them are indeed feverish. The work constantly threatens to leave the frame and sometimes achieves that quality of weightless wall art that defies the rectangular and insists on its own limits.

Neuwirth achieves this effect by stacking layers of cut paper, some painted, some scribbled, and creates distance between the sheets using tiny glued media that you won’t notice until you look at it. pieces for a minute or two. Srebriansky uses resin, that glossy, plastic and favorite of modern sculptors, as if it were paint, spreading it in a thick wash. Sometimes the resin drops appear to have been extruded from the parts themselves, or perhaps from some resin pumping machine hidden behind their flat surfaces. Neuwirth’s art looks humble and homemade, even when huge; Srebriansky feels industrial, bespoke and precise, even when trying to do damage. These works want to jump off the walls and meet, shake hands, or dance together, in the middle of the gallery.

Both artists identify as New Yorkers, but Neuwirth maintains studio space in the massive MANA Contemporary complex at the west end of Newark Avenue. Unlike Srebriansky, whose paintings often reflect glass skyscrapers in the Big Apple, Neuwirth works in a style that I deeply associate with Jersey City: busy, brightly colored collages, artfully unbalanced, tactile, defiant the playful viewer to touch the art. . Neuwirth, in the crammed Jersey City tradition, leaves very little empty space – his collages push hard against the corners of their frames. The top layer of paper hovers above the others as if suspended there in sheer belief, and while it is not entirely accurate to call these works sculptures, it is fair to say that they are built rather than painted. Abstract, but their assemblage suggests many things: threaded underpasses and overpasses, the sun above a chaotic landscape, an architect’s most provocative model. Like many other artists who have worked in Hudson County, Neuwirth seems to respond to the endless web of roads, the adaptive reuse of buildings, the squashed neighborhoods, the constant, starved, and on-the-fly rebuilding that dominates the public life. . These are certainly mental landscapes, but ones that resonate strongly with the post-industrial area in which Art House and MANA are currently located.

Neuwirth’s work does not advertise its constructed quality; Srebriansky’s work leads with it. In one of his most striking contributions to the show, a roughly shaped six-pointed star surrounded by bright red resin crouches over a section of the rectangular artwork that appears to have been ripped off. The rest of the table (and this one is, indeed, paint) consists of shiny, layered splatters of resin that overlap and ripple over the edges like melted wax. Like Neuwirth, he is drawn to striking, almost incandescent colors: the pinks, magentas and chartreuses of finger paints or Play-Doh cylinders. He draws figures on the cold skin of his pieces: cartoon characters, greenery, a benign-looking pink pattern that, on closer inspection, resembles bomb blasts. The manipulation of resin here borders on virtuosity, but he has also made room in his works for ordinary spray paint and acrylic; combined with the metallic and almost reflective quality of the resin, this strongly suggests the facades of buildings on downtown streets, impassive, but enthusiastically decorated by graffiti artists. It is art that could only be created in an urban context, particularly in a city experiencing the kinetic forces of rapid upheaval and redevelopment.

The large pieces of spirit forms are the most likely to grab attention, but some of this show’s deepest rewards come from their modestly sized cousins. On an overhanging wall next to Neuwirth’s greatest contributions, six interrelated images are stacked vertically, floor to ceiling. In their lighter wooden frames, these breathe a little easier and feel a bit more resilient than Neuwirth’s more explosive pieces. Srebriansky’s style also fits a smaller size well. My favorite work in this whole show was a simple study in blue resin, with a wave of white drops threatening to flood it from below. Its immediate neighbor is a flat rectangle emblazoned with layer after layer of resin in different colors. We know this because Srebriansky marked the room, revealing a rainbow of gobstopper colors beneath the white surface. It has some of the quality of a dented car door, and it has an emotional intensity that many of Srebriansky’s larger and more imposing paintings lack.

These small pieces by Srebriansky hang near the large gallery windows that overlook 17e Street. Across the street is a vacant lot on which a new building is sure to see the light of day soon; on the other side of the field, a banner greets potential buyers of Cast Iron Lofts. There’s no great discontinuity in feel between Srebriansky and Neuwirth’s work and the scene on the other side of the glass, and that can’t be entirely attributed to this show’s occasional resemblance to street art. It is also because, as abstract as they are, the works of these artists also respond to the volcanic forces that are reshaping the urban space on both sides of the Hudson. Transformation on this scale is likely to seep into your dreams, shape your mind shapes, and find expression in large, anxious and sinister pieces that speak volumes.