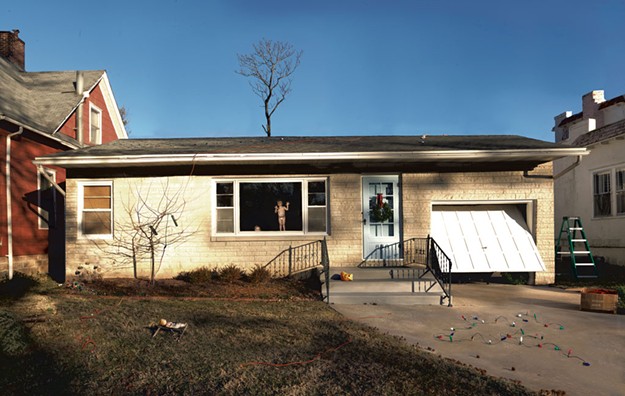 A mother turns her back on her three young children as she searches the back of a car trunk for something out of sight. Behind her, one of her children circles a sign indicating the loading area, while her little brother tackles cracks in the sidewalk outside a barricaded building, and their little sister holds a bag hand as she crosses the street alone. The scene is ominous but oddly carefree – if problems loom on the horizon, they have not yet arrived.

Julie blackmonThe photographs of, including “Loading Zone”, suggest a delicate balance between freedom and responsibility, chaos and order. They give a glimpse of the artist’s universe and, sometimes, of his garden.

Ten of Blackmon’s large-scale color photographs from his most recent series, “Homegrown,” are on display in “Julie Blackmon: The Everyday Fantastic” at the Hood Downtown Gallery in Hanover, NH

The phrase “everyday fantasy” refers to the extraordinary things that we sometimes find in the ordinary details of everyday life. Children populate Blackmon’s photographs, with occasional glimpses of parents or other adults. The locations – screened porches, dark paneled stairs, and asphalt walkways – are more like characters playing a role.

In “Hair” (44 square inches), for example, a girl stands on the bottom step of a staircase with a hairbrush in one hand. Perhaps the need to keep brushing her waist-length blonde hair explains the fearful look in her eyes. Or it could be related to the figure just out of sight in the closet (a brother?) Or another figure, also partly hidden, above her on the second floor. The staircase appears to be a walkway, the security being neither above nor below.

An asphalt driveway plays a prominent role in the 44 inch by 58 inch “Stock Tank”. Two children in swimsuits are lying on the asphalt, a few meters from a swimming pool in which five children swim underwater like a circle of sharks. The view, seen from above, exaggerates a sense of threat in the otherwise pleasing scene. The same is true of the fact that kids swim with no adults in sight – and, yes, those kids on the asphalt could fry in the sun.

The photographs were all taken from 2008 to 2016 in Springfield, Missouri, where Blackmon grew up as the eldest of nine children and where she and her husband raised their three children. Blackmon studied arts education and photography at Missouri State University, but didn’t return to photography until he was 35.

“Life is coming. You have children,” she explained in a telephone conversation. “Then we moved into this old renovator, which had an old darkroom. It was the first photography studio in Springfield. ”

Initially, Blackmon’s motive was simple: “Take black and white photos of my children to hang on the couch, Pottery Barn. Eventually, I started taking photos during that magical hour of the evening.”

Among the many things that Blackmon began to study were the 17th century Dutch genre painters. She was in love with colors, titles and stories. Jan Steen, whose paintings are filled with the chaos of great families, was an inspiration for Blackmon’s domestic narrative.

“I started to think about how I might capture how much has stayed the same, how much has changed,” she said. “It made me think about my own life, my own childhood. How could I make my own updated version of these old paintings? ”

Blackmon began to photograph his own children, as well as his nieces and nephews. (Her youngest child is now 18.) Over time, this group has grown. “I have a unique situation in that the children I photograph have been doing this their entire lives,” she said. “They have this perfect fusion of doing what I tell them and doing something else.”

Behind the camera, Blackmon is the director: choose locations (often her house or that of a brother), then add a piece of furniture, a painting on a wall, toys, hamsters. “I like the control of knowing what goes where,” says Blackmon, “but it mostly has to be done on the set I’m shooting.”

Everything in these photographs is intentional, even when chance reigns supreme. Well-organized choices and detailed planning don’t go far when people are added to the photoshoot, especially children. This is why it is so important that “they are comfortable with what I am doing without being aware of themselves,” Blackmon said. “I cannot do this miracle.”

In Blackmon’s photographs, children live, play, get bored, make up stories, play them and play them again, as if they were unaware of the camera. His willingness to relinquish control and allow chance makes his work truthful and wonderful. She likens it to fiction, which often tells the truth better than the reality.

In addition to the 17th century masters, Blackmon credits more recent artists, including Edward Hopper, Norman Rockwell, and Balthus, as his sources of inspiration. Like many of Hopper’s paintings, Blackmon’s images are open-ended. The spectator is part voyeur, part participant, building their own story from the staging of Blackmon. 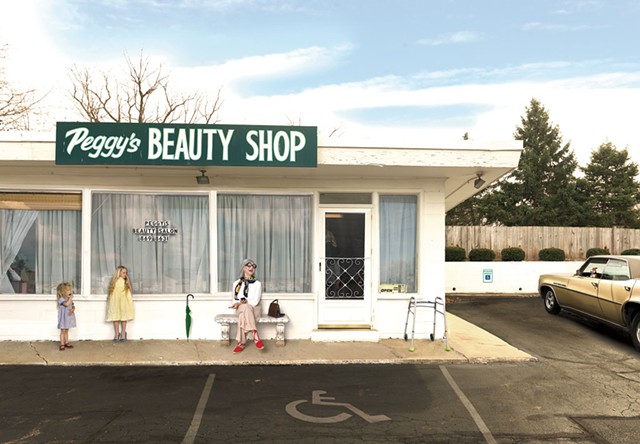 Hood Museum of Art director John Stomberg compared his images to the interiors of Hopper’s paintings, saying, “There is personal poetry in these pieces. In Blackmon’s “Night Windows” (44 by 57 inches), viewers look inside an apartment. There, a man pours himself a drink and looks about to strike up more than a conversation with a woman, who appears to be naked on a bed. An exterior wall partially blocks our view of her, so certainty remains elusive. The description of this scene might be from a Hopper painting, but it is a photograph of Blackmon.

A whiff of nostalgia inhabits these images, but they also make us question memory and history. What changed? Is it better? Why and for who ?

It is difficult to locate the time of these photographs by their staging alone or by the people who compose them, yet they are contemporary. Scenes create a sense of a bygone era – perhaps the 50s or 60s – while objects such as a FedEx pickup truck serve as 21st century validations. Having spent a lifetime in Missouri, Blackmon isn’t nostalgic for a place, but she can yearn for a time that she can catch and release.