Of all the ulterior motives one can have in setting up an art exhibition, building a community is a very good idea. That’s what Shawn Dumont had in mind when he put together the Shelter culture project this past year.

The result is a large group show that opened at Burlington’s Karma Bird House Gallery this month. Bonus: a small pop-up shop in the “vault” – a former walk-in safe in the post-industrial building on Lower Maple Street.

Dumont, 42, invited participants from as close as to his side (Michael tonn) and to Tokyo (Toshifumi Kiuchi). The works are two-dimensional – drawings, paintings, serigraphs, weavings – with three exceptions: the ceramic sculptures by Alex Kovacs, a wall installation by Lydia Kern and pieces of acrylic on wood superimposed by Jackson tupper. More than 50 artists are represented. 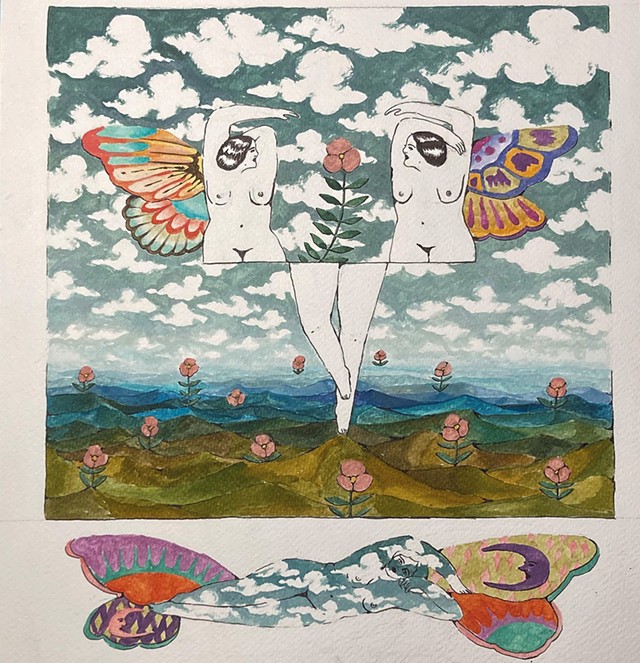 The gallery space also houses Kestrel roasters and tables for caffeinated laptops. Its south wall is pleasantly crammed with works of art hung nearby. With a handful of pieces on adjacent walls, they collectively exude a counter-cultural energy and aesthetic.

While the exhibition has no theme, the almost universal zest for life in works of art rejects a “sucked this year” narrative. Egalitarianism is refreshing too; the works of emerging artists mingle with those of successful artists. It is difficult not to feel that the works themselves have formed a community.

Dumont, artistic director of Burton snowboards and a teacher-member at Iskra Printing Collective, is well connected in the world of design. He’s a great guy too, so reaching out to performers he admires hasn’t been difficult, even during a pandemic.

The genesis of the Shelter Cultivation Project preceded COVID-19. “Two years ago, I started to work on core values, to discover who I am,” Dumont explained during a visit to the gallery. He identified four primary values ​​in his life: to create and to manufacture; exploration; being a “foreigner” (a rudiment of skateboarding culture); and community building.

“Then the pandemic struck,” he said. And her toddler son had open heart surgery (he’s fine now). But the challenges of 2020 only encouraged Dumont to put its values ​​into action. He started contacting artists and used his federal stimulus check, he said, to buy them work. The seed of what would become the Shelter Cultivation Project began to germinate.

And then Dumont said, “I had this idea to build a geodesic dome and set it on fire. With the carpenter Seamus Hannan and R. Elliott Katz, operations and facilities manager for Burlington Generator Space, that’s exactly what he did. An image of the flaming dome, placed on a frozen cove on Lake Champlain, became the logo of the fledgling project.

Dumont immersed himself in the creation of the exhibition, obsessed with everything “right down to the packaging,” he said. Hang custom-made sweatshirts and t-shirts with small, hand-made labels on a display in the exhibit store. On a nearby shelf, place dome-shaped candles. He invited artist Phoebe Lo to paint a mural on a wall in the small space.

Then there are all those artists and creators that Dumont enlisted in, their connections expanding and renewing themselves. Artists from elsewhere who went to Burlington, slept on Dumont’s sofa, played with his children. Silkscreen artists until the early hours of the morning in the Iskra studio. Artists that Dumont had never met before and who are now his fast friends. The Shelter Cultivation Project has become more than an exhibition.

Organizing the project was no small feat, but that Dumont accomplished it is no surprise. Growing up in New York City and New Hampshire, he embraced both urban stimulation and what he called a “hippie” ethic. His father ran a Native American art gallery and, Dumont said, “I grew up going reservations with him.”

His ability to bring cultures together is evident not only in the Shelter Cultivation Project as a whole, but also in Dumont’s elegant serigraphs. In “Vessel 4,” for example, the shape and pattern of the vase appears distinctly native, but closer examination reveals happy suns, smiling faces, and giant-eyed butterflies.

“I kind of pull all of that, that human language,” Dumont said, “symbols of a lot of cultures.”

Thinking ahead, he said he would like to host shows like this in other places – “cultivate shelter” in new communities and connect new circles of friends. “I like to shake things up,” he said.