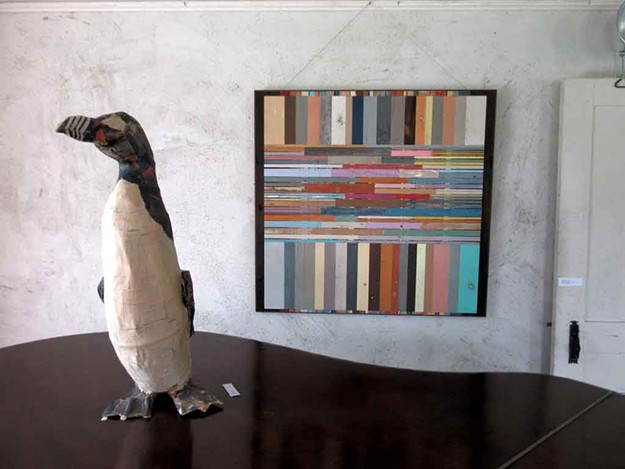 The annual Art at the Kent Exhibition is one of the state’s premier arts events, drawing hundreds of people to its fall opening each year. The 2019 edition, entitled “reVision”, has developed from a core of playful works by collage and assemblage artists and works on loan from the famous collage artist Varujan Boghosian. Curators Nel Emlen, Allyson Evans and Vermont State Curator David Schutz ultimately chose 17 works by artists to fill the idiosyncratic spaces of the Kent Museum in Calais.

“Fill in” is perhaps too common a word. We could say more precisely that the work participates in the presence of the partially restored 19th century building. The state purchased the structure with the intention of turning it into a history museum, but never completed the renovations. Now the charming site is only open one month a year as a place of art. Many interior walls consist only of narrow slat planks separated by interstices, covered here and there with wire mesh and a few spots of plaster.

Hanging art over such layers of history on display is not only tricky – nail holes are impossible, let alone forbidden in this historic building – but conceptually fun. The collage-centered works of “reVision” evoke both the superposition and the surreality of space.

The show begins with Duncan johnson‘s “Build Up”, a framed assembly of small pieces of reclaimed wood cut into rectangles, with dimensions ranging from a few millimeters to a few inches. The parts have been painted or bear traces of their original paint. They give the viewer the impression of a random discharge of colored wood several layers deep, but inspection reveals that each piece has been carefully attached. 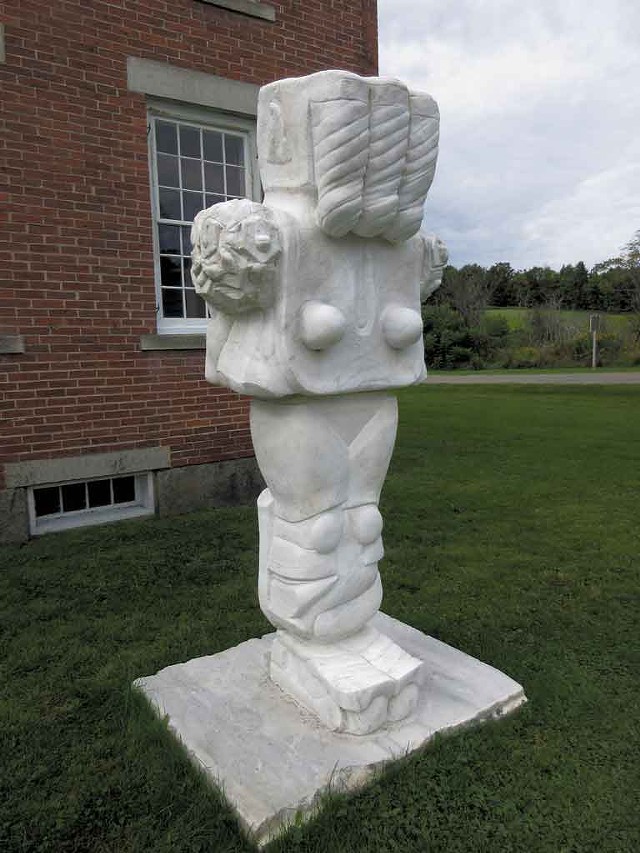 Wood is present throughout the exhibition, from Alexandra Bottinelli‘s found wooden crates filled with smooth, beeswax-rubbed wooden sticks – one titled “new container (box of 54 golden rods)” – to sculptures the size of a model of Benjamin Davis. “Medusa”, a heavy figure with a very stylized serpent’s head, appears to be a study for a much larger marble version which is installed on the ground.

Joe chirchirilloThe kinetic sculptures of, made from found wood and metal, are the first sign of the exhibit’s “wacky and fun” thread, as Emlen describes on a recent visit. Intended to refer to cause and effect in nature, the rambling sculptures, when plugged in, set up chain reactions using water or weight that make a lot of noise.

Peter ThomashowThe electrical assemblies of generate an equally wacky movement with a more aesthetic intention. A collector of mid-century wooden toys and other vintage artifacts, Thomashow attached a variety of balls, dolls and painted discs with swirls to 11 vintage laboratory stands powered by motors to create ” Rotating Optical Toy Experiment “.

Matt Neckers, known for its mobile micro-exhibits – one housed in a 1940s refrigerator – hosted an installation called “Missile Guidance System” in a small room. The assembly includes a metal typing stand, rotating globe contraption, messy house facades, a framed photo of the artist dodging in fear next to a homemade rocket, and other narrative detritus; it is reminiscent of the lair of a neurotic handyman wearing an aluminum foil cap.

The humor turns surreal in the collages of Marcus Ratliff, whose René Magritte-style images include an apple hanging in the air and the “Orville and Wilbur” bowler hat, which are held up to the waist in a waterfall. W. David Powell similarly uses photographs, images, and other ephemera from the 19th century to create collages such as “Reifier,” featuring the figure of a fantastic robot who, as the title suggests , can realize abstract ideas. 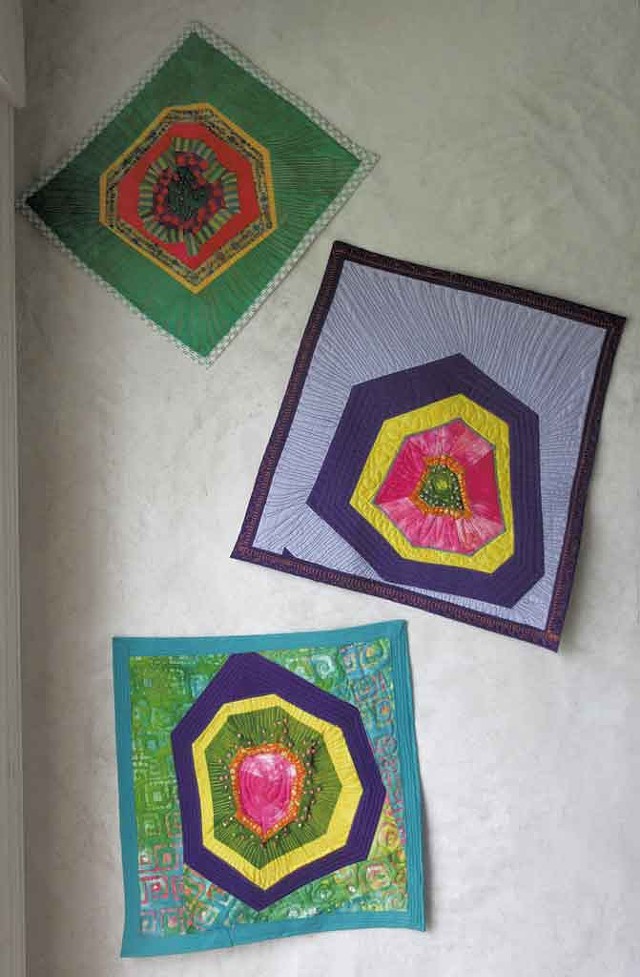 In contrast, much of the show is not at all humorous. Bottinelli, whose collages feature oil on paper on birch board, often takes the Black Lives Matter movement as his subject. A series of prints by Jessica scriver explores her emotional struggle with cancer. Scriver’s larger and mixed paintings are abstractions that evoke the interplay between man-made and natural forces that shape the earth. One of quilter Kristina Snook’s beautifully detailed, colorful, and asymmetrical works, “Multiply,” discusses the effects of hydraulic fracturing.

Gail BoyajianLife-size papier-mâché birds, placed throughout the exhibit, commemorate 24 extinct species using only colored paper from the New York Times. She ironically links this sense of loss to current events, incorporating a photo of Hillary Clinton in her tribute to the great penguin and one of Barack Obama in her dodo.

Diane sophrine, who divides her time between Vermont and Hungary, uses handwriting – legible handwriting and illegible scribbles – in her abstract works on sewn paper. In “Blue Midnight” abstract forms appear as enlarged and entangled cursive letters, while in works such as “Fekete Ország / Black Country” discernible words in chalk and acrylic paint serve as a study in black. and white in the interaction between the medium as object and language as document. 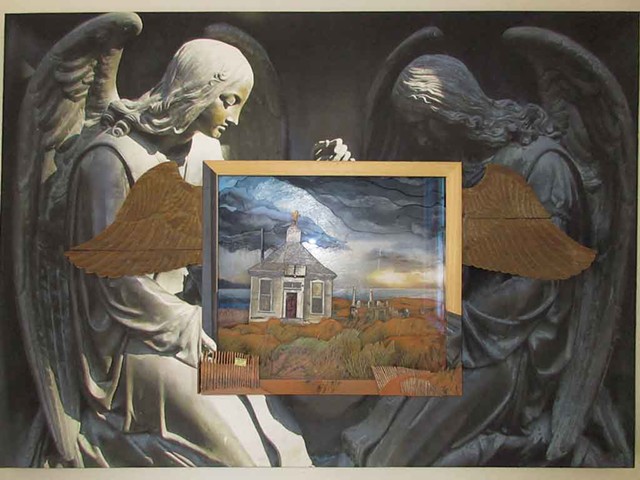 A playful nostalgia is tinted Chris Groschnerlarge painted collages, which consist of high relief photographic assemblages in interior frames. In “Boneyard,” 2D angels appear to hold aloft a framed scene of an abandoned seaside house and graveyard, its fence and other items lying within inches of the surface. Groschner uses antique cabinets of curiosities in two other works, creating dioramas of abandoned rooms behind glass doors and models of aging houses perched on top.

The traces of the living are explored in a very different visual language in Kelly holtphotographic collages by. Urban and idealistic, Holt’s blurry images often result from a shaking camera hand, capturing not the solid presence of people but their paths in a street or urban space. Holt cuts them out and glues them with alphanumeric or geometric elements in acrylic or spray paint, creating an environment for all that celebrates the unity of passers-by.

Viewers may notice the traces of the curators’ own hands subliminally, in a succession of forms from one artist’s work to another, or in the placement of a painting whose patterns mimic the exposed wire mesh. from the wall. Yet these touches help make Art at the Kent shows a must. Artists do not ask to be exhibited there; the curators select them after visits to exhibitions, workshops and galleries throughout the year.

“ReVision”, like the 12 previous Kent broadcasts, brings together a remarkable working group into a nifty visual experience. Don’t wait too long to see it: on October 7, the unheated building will close for the rest of the year, and the art will leave no mark.