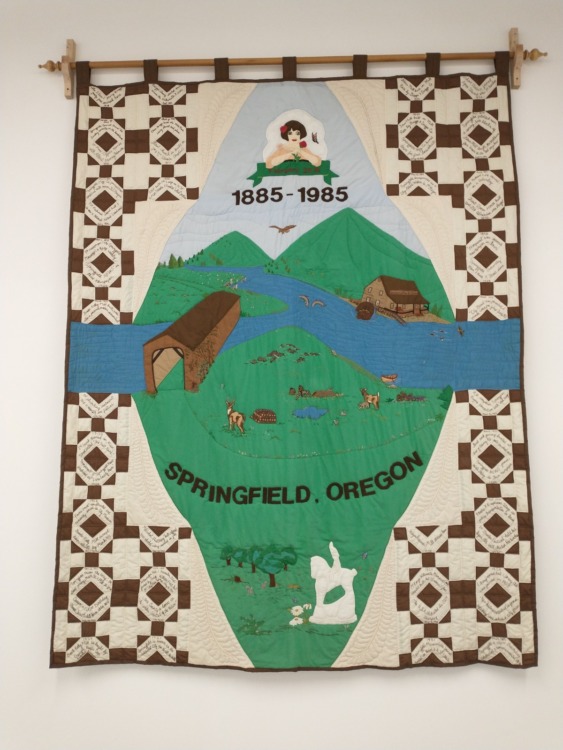 The idea of ​​a fabric-based show was in the air, says Laura Hughes. But it was an old photograph posted to Instagram by the Springfield History Museum – an image of people gathered around a quilt – that sparked the idea for “Quilt Bloc”, now on display at Ditch Projects until March 20. The exhibition was co-curated by Hughes and Krista Raasch. Both are members of the artist-run gallery and studio at Ditch Projects in Springfield.

Neither Hughes nor Raasch have any art in the show, but it is common for Ditch members to feature the work of other artists. In fact, that’s part of the reason the exhibition space was created thirteen years ago, to bring contemporary art to Springfield, wherever it’s made.

After seeing the Instagram photo, Hughes reached out to Springfield History Museum curator Madeline McGrew. Hughes expected to see a quilt or two, but was delighted to have access to the museum’s entire collection, which dates back to the late 1800s. to “Quilt Bloc” are under glass, with the exception of the Springfield Centennial Quilt which hangs on the wall.

Along with the historic quilts in the exhibit, contemporary art is by Max Adrian, Frances Andonopoulos, Andrew Douglas Campbell, Sonja Dahl, Noah Greene, Irene June, and Sara Siestreem (Hanis Coos). This collection of multimedia works, sculptures, installations and contemporary textile art would have made an inviting exhibition on its own. But the inclusion of historic quilts, the kind that inspired the show, specifically grounds the exhibit in Springfield.

The title “Quilt Bloc” is a play on words. A quilt block is the basic unit of a quilt. Then, according to the gallery guide, “A block is defined as a temporary gathering of people, often for a political purpose.” The exhibition aims to link one type of block to another, to assimilate social construction to the construction of the fabric.

Hughes says she and Raasch weren’t sure at first whether to include the Springfield Centennial Quilt. Although the quilt was made relatively recently — in 1985 — it presents the pioneering narrative, she says, which is aligned with the ideal of Manifest Destiny. It depicts three Springfield landmarks, one of which currently houses Ditch Projects. But there is no reference to an aboriginal presence, and so a person might get the idea that Springfield has only been populated for the last 100 years.

The landmarks depicted on the quilt are The Booth Kelly Lumber Mill, The Springfield Flour Mill, and the Oregon Statehood Memorial. The Oregon Statehood Memorial (considered the inspiration for the statue of Jebediah Springfield on the The Simpsons) was made for the state’s centennial. This is a large white carved equestrian statue: A white man on a white horse made in 1960 to honor the centennial of the state of Oregon. The flour mill depicted on the quilt no longer exists. The Booth Kelly Lumber Mill is no longer in operation, but the site has been redeveloped to include 26 industrial and commercial spaces, one of which is occupied by Ditch Projects.

Hanging on the wall opposite the Springfield Centennial Quilt in the show is a work by Sonja Dahl titled Involve: Incomplete (Birds in Flight), 2018. Dahl teaches at the University of Oregon where she also manages the fiber studios. Although there is no formal connection to the UO, Ditch Projects was started by graduate students of the UO, and there is an informal pipeline between the two.

Dahl’s work is a border made from strips of fabric. It looks like a frame on the wall, but without a picture inside. “A part is missing,” observes Dahl. A simple but nevertheless profound observation: no image, she adds, will tell the whole story.

The absence of words on the wall seems to bring the point home. Because, the exhibition has no identifying text near the art: No statements, no descriptions or labels. Although Dahl’s artwork backing is instantly recognizable as Pendleton branded, it’s not until I look at the description in the guidebook that I know for sure that it is made from “Pendleton woolen fabrics and wool blanket”.

The choice of fabric for this work puts the viewer on alert. Pendleton blanket designs were appropriated and then marketed to Aboriginal people. peoples. And today they are sometimes used traditionally. For example, Dahl observed that some Native American students, upon graduation, were ceremonially given a Pendleton blanket by their families.

As Dahl puts it, Pendleton’s relationship with Indigenous peoples is “complicated.”

Of all the historical quilts, Hughes says “the one with the names” struck a chord with her. This one is called the Wendling Quilt, after the city in which it was made. Since all of the quilts on loan from the history museum are made by anonymous people, it’s no wonder the names of one quilt stand out.

the Wendling Quilt is a simple block quilt design. The variation between the blocks comes from the different colored fabric and the thread used to embroider the names. Each block is dated, most often 1942 or 1943. Jay Swofford suspects that the names stitched into the blocks represent a group of people who searched for enemy aircraft during World War II. Her father’s name, Loyal Swofford, is one of those sewn into the quilt. At the time, his father was a scout and the scouts were part of a larger temporary group of adults tasked with watching out for the enemy, said Hughes, who heard it from Swofford.

Sara Siestreem (Hanis Coos) is a basket weaver but her wall installation IMMOVABLE is composed primarily of digital prints arranged in rows. The grid or block pattern is accented on top in one corner by red cedar bark and accompanied by a basket of tulle in the opposite corner on the floor.

Although Siestreem earned an MFA from Pratt Art Institute, she says her training began at home because she “comes from a family of professional artists and educators.” Siestreem received a TAAP (Traditional Arts Apprenticeship Program) in 2017-2018 for her practice and research on traditional basket weaving. His large works feature a multitude of prints, each containing an aspect or moment of everyday life, it seems. And within this framework are references to basketry.

Describing her practice for the TAAP award, she said her weaving tradition “extends from the natural world, our homes, the classroom, tribal government and outside institutions.”

His work certainly seems to encompass these different aspects of nature and culture. But it reads in a personal way, like a wall-sized diary with a day-in-the-life feel. And every day is a different block, a different picture. Siestreem’s work speaks for itself, but he is also in conversation with the Springfield Centennial Quilt. The absence of any reference to Native American culture on this quilt makes REAL ESTATE all the more powerful.

the Springfield Centennial Quilt depicts places that no longer exist (the Springfield Flour Mill) or places that have been given a new purpose. The Booth Kelly Mill complex sits on the site of the old mill, but is now renovated and described as a “community, destination and resource for local artisans, built on Springfield’s proud heritage of craftsmanship.”

Places change, and Springfield definitely did. Perhaps more importantly, ideas change. Oregon turns 163 this year. As far as I know, no one made a quilt or carved a statue to celebrate the event. But the Oregon State Legislature website has information and links to a number of online programs and learning opportunities, and at the top of the page it says: “We would first like to thank the many tribes and bands who call Oregon home and honor the ongoing relationship between the land, plants, animals and indigenous peoples of this place we now call Oregon.”

Ester Barkai is a freelance arts writer. She writes for The Magazine in Santa Fe, New Mexico and for Eugene Weekly in Eugene, Oregon. She started working for publications as a fashion illustrator in Los Angeles and then in New York. She has worked as a teacher teaching a variety of art history, drawing and cultural anthropology courses.