This story has been updated to reflect the cancellation of several upcoming exhibitions due to COVID-19 restrictions.

Paul Gruhler, a Craftsbury painter who turns 80 in September, only wanted to catalog his work. A year ago, he pitched the idea to his friend Linda Mirabile, senior designer at RavenMark in Berlin, Vermont.

When she visited Gruhler’s studio, Mirabile saw 60 years of work, carefully dated and stored in series – from the first Chelsea series of the 1960s and 1970s to the Benchmarks series of 2019 and 2020. She suggested that the work deserved more than a catalog.

With the help of many, Gruhler’s work is now the subject of four coordinated exhibitions around the state, each representing a different period in his career. At Highland Arts Center in Greensboro, visitors can view “Harmonics: 60 Years of Life in Art,” featuring selections from the Chelsea series, through August 29.

And there is a catalog, designed by Mirabile and beautifully printed by Villanti printers in Milton, with a preface by Vermont state curator David Schutz and an essay in art history by Shelburne Museum associate curator Carolyn Bauer.

A glance at the catalog shows one thing: Gruhler may have explored variations in materials and an extraordinary range of colors over the years, but he pursued a single style for six decades: geometric abstraction with sharp contours. .

The movement, started in the late 1950s and exemplified by Kenneth Noland, Ellsworth Kelly and Josef Albers, was a reaction against the personalized gestures of Abstract Expressionism. It blossomed just as Gruhler, who grew up in Queens, NY, graduated from high school in 1959 and took to the streets of Manhattan for what would be his only art education: total immersion. in the art scene as it happened.

The Highland exhibition, curated by Maureen O’Connor Burgess, shows the progression of Gruhler’s style after obtaining his first studio in the Chelsea district in 1962 at the age of 21. A first oil painting from 1963, “Chelsea Series # 12”, is a gestural and amorphous zone of variegated blues with an energetic explosion of indistinct white brushstrokes in the center.

“It was my first real voice: gestural but [focused on] color and straight lines, ”said Gruhler, his Queens accent intact, during a visit to the gallery with Seven days. 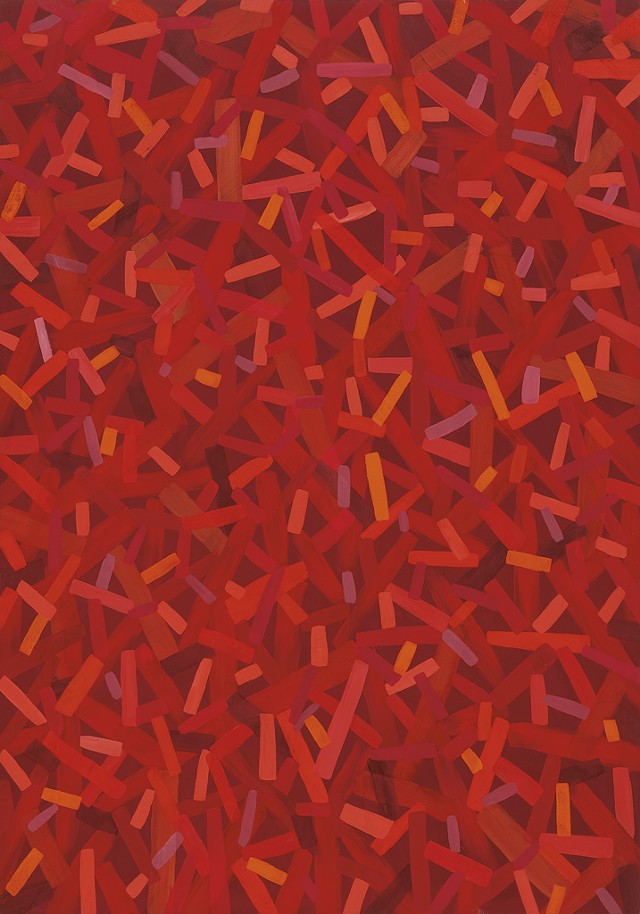 By the time he made “Chelsea Series # 45” in 1967, Gruhler had landed on the style of most of the work exhibited at the Highland – and one that continues to fascinate him today. The 50 x 90 inch acrylic painting divides the canvas into two geometric blocks of slightly different blues connected by a thin horizontal band of reds arranged in irregular stripes. All edges are made with duct tape. Later, the artist perfected her application of color, removing the faint trace of the brush strokes, and began sealing the tape with gel to achieve sharper lines.

For Gruhler, the fascination of these compositions lies in the balance of tensions created by shapes and colors. He mixed his own colors, using each only once, and donated the additional paint to the Howard Center in Burlington. It was only recently that Gruhler realized that he had to document his color recipes: “I had to touch up something, and I had no idea what was in it”, a he declared.

Gruhler credits three mentors with helping him find his voice. In 1960, he befriended Michael Lekakis, a sculptor and poet who had exhibited solo at the Guggenheim Museum and the Whitney Museum of American Art. Lekakis took the budding artist to openings and artist gatherings, where Gruhler mingled with Alexander Calder, Isamu Noguchi, Louise Nevelson and Barnett Newman. Lekakis wrote legends in poetic form for the first solo exhibition of Gruhler’s paintings, at the De Mena Gallery in 1966.

“It was such a dynamic time then, after World War II,” said curator Burgess, who attended Manhattanville College for Art and Art History from 1970 to 1974 and is also the curator. of the medical center exhibition. “Artists were settling in this community, and a lot of it was fundamentally illegal; they crouched down. I remember going up three floors in the Meatpacking District, and there would be all this amazing art. It was really casual, not formal. It was around the time that Gruhler had just found his style. ”

In 1964, Lekakis introduced Gruhler to the Modernist painter Harold Weston, a central figure who helped organize the National Arts Council and Government (the first federal arts fund) and served as an artistic advisor to the Information Agency of United States. Weston became Gruhler’s first patron and facilitated his first solo exhibition abroad, in Mexico City in 1967.

The rest of Gruhler’s overseas exhibitions were due to his own efforts. In 1961 he had accepted a marketing position with American Airlines to learn about Greek and Italian art. “I could fly almost for free – all back and forth to Europe to see an exhibit – and I got a big discount for hotels,” Gruhler recalls. With his portfolio and slides of his work during these trips, the artist has landed solo and group exhibitions in Finland, Sweden, Germany and the Netherlands.

Lekakis wrote poetry to accompany the Mexico City exhibition, an excerpt of which is on display at the Highland Center. Poetry deeply interested the two artists. Gruhler, who grew up in a fundamentalist Christian family, heard his first unrelated poetry when a high school teacher read Robert Frost and ee cummings aloud. Moved, he tried to become a poet, he recalls, but realized that “I had no way with words”. Gruhler suffered from dyslexia, a diagnosis that was not made until he was in his 60s. He still reads poetry daily in his studio to reach a meditative state before painting.

This multidisciplinary approach, Bauer noted on a phone call, was common in the 1950s and 1960s. Many artists, including Joan Mitchell and Frank O’Hara, have linked their practice to poetry, meditation and art. philosophy. “It was in the water,” said Bauer, who curated a geometric abstraction exhibit called “Hard-Edge Cool” at the Shelburne Museum in 2016.

In 1965, Gruhler met his third mentor, the German-American artist Herb Aach, whom he described as “an expert in color”. Aach introduced him to acrylics, a revelation for the artist, he recalls, “because I couldn’t get that flat surface with oils.” Aach, the head of the art department at Queens College, also suggested applying a clear coat of acrylic polymer to a stretched Belgian linen canvas to seal it against color smudges. The sealant allowed Gruhler to isolate blocks of a flat, saturated color against a beige background.

“Chelsea Series # 4”, 1978, is a particularly astonishing example of Gruhler’s use of exposed and treated canvas. The painting comprises two dominant blue blocks of different shades, closed by vertical bands of darker blue and separated by more vertical bands of lighter blue and a central red; tactile beige linen frames them all and divides each strip and each block.

“[The beige canvas] floated for me, and it made a tension with the forms. I used subtle color changes to create this tension, ”said Gruhler.

How did he end up in Vermont? Gruhler came to the Bennington area to pay homage to Frost on the poet’s death in 1963, but it wasn’t until 1993 that he decided to move to the Green Mountains. His New York neighbors, writer Kathryn Davis and filmmaker Walter Ungerer, had decided to teach at Goddard College, and Gruhler’s visits to their new home confirmed to him that the place made it easy to meditate and paint. He hasn’t stopped doing both since.

“He’s stuck with geometric abstraction. He’s got this endless fascination with color and form,” Bauer said. “It’s amazing how many variations you can do with just these elements. And he’s perfected it over time.”

Correction, Aug 11, 2021: An earlier version of this story misrepresented Carolyn Bauer’s title. Bauer is Associate Curator at the Shelburne Museum.

2021-08-11
Previous Post: Art review: two galleries attract viewers with a multitude of experiences
Next Post: A work of art in colorful fabric to put the municipal center of Saint-Charles in a new light