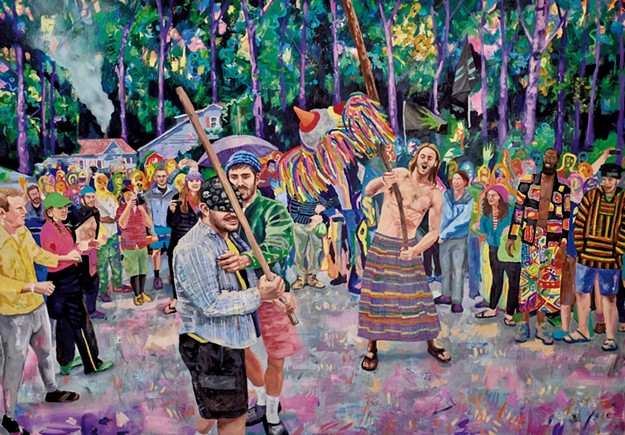 A visit to see “Aimless Pilgrimage”, an exhibition of paintings by Danielle Klebes at 77 Gallery in Rutland, becomes a pilgrimage in itself. Minus any religious connotation, it is a pilgrimage in the sense of a journey worth making.

The gallery, located in the former Central Vermont Civil Service building at 77 Grove Street, is now the largest in Rutland. Klebes’ work appears to have been made specifically for the 3,000 square foot gallery, which opened in November 2017. The vibrancy of his palette and the crowds of people in many of his paintings enliven this former office space.

The 30 oil paintings on canvas by Klebes are considerable; the average work is about 60 by 54 inches. The largest, a 58-by-80-inch diptych titled “Florida Boys,” depicts two young men sparring in boxing gloves, surrounded by a semicircle of other young men. The gallery is large enough to accommodate this work without overcrowding it, which is important because each painting offers so much to absorb.

The colors immediately impress the viewer. Klebes’ paintings are vibrant depictions of people in contemporary settings such as music festivals, fairs and other gatherings. More mundane places also appear: his subjects hang out in a clearing in the woods, lounge on the hood of an automobile or curl up in a chair. Its hues, however, make the mundane anything but ordinary.

All of these works were painted in 2017 and 2018. The settings suggest places where Klebes spent time, such as Florida, where she recently attended college; or Croatia, where she studied abroad. Yet they carry a sense of sameness; none of the paintings are necessarily noteworthy because of their location. 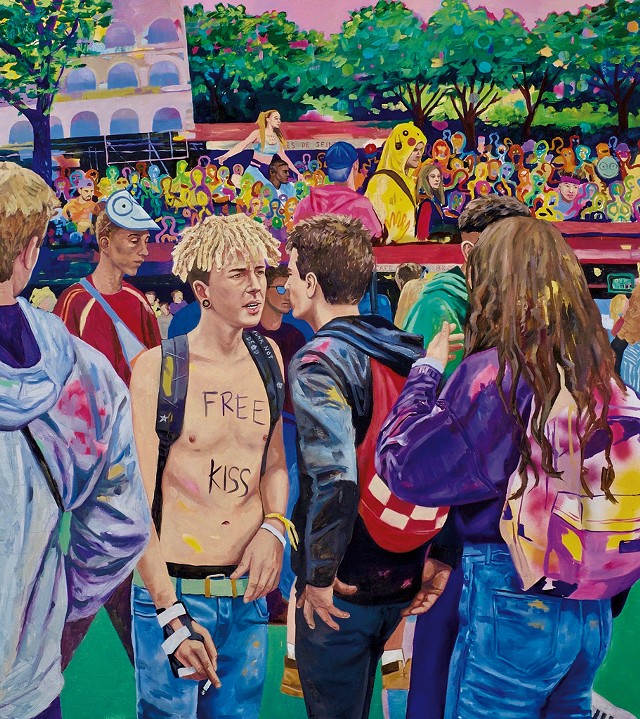 On the contrary, they are remarkable for their evocation of being alone in a crowd, or simply alone. Klebes also captures a sense of transition – the time between the end of school and the unknown future that young adults inevitably approach.

In “Techno Parade”, for example, the subjects appear to wander aimlessly through a music festival. In the background of “Techno Parade” and “Techno Parade II”, non-English words appear subtly like graffiti, while English expressions such as “Free Kiss”, “Punk Not Dead” and “Love Me” are prominent .

The Techno Parade is an annual event in Paris, intended to promote electronic musical culture; more than 350,000 fans march through the streets accompanied by a dozen floats with DJs and music. Interestingly, the figures in these paintings almost seem to be out of the event rather than of the participants in it; Klebes may be noticing the similarities in all these tribal events and the alienation one can feel in a crowd. 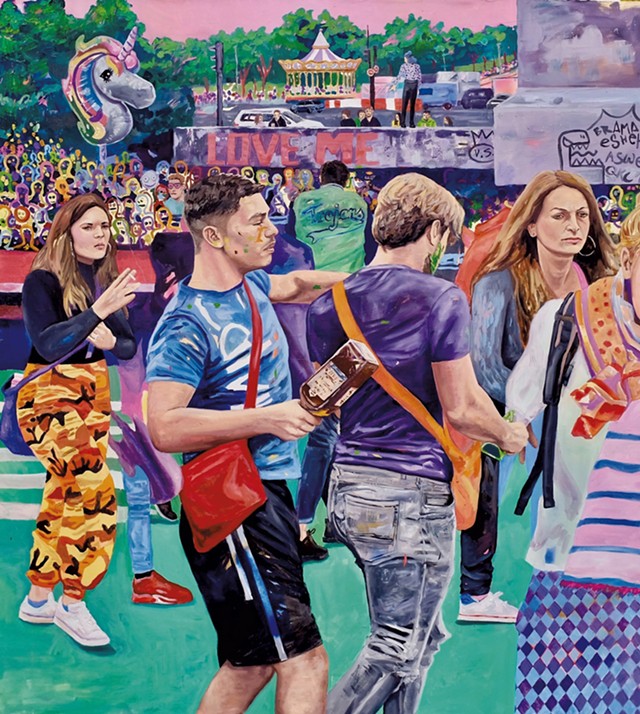 “I take the liberty of creating my characters’ environments, sometimes removing them completely, sometimes abstracting them, and sometimes adding surreal elements,” Klebes writes in an artist statement. “The paintings are not specifically narrative, but they do include painterly clues to the experience of the subjects.” A prime example of this approach is “Water Balloons Forbidden for Safety Reasons”, in which she places herself on par with the actors in her painting theatre.

The paintings are very representative of contemporary culture, and one gets the sense that the individuals who inhabit Klebes’ works are his contemporaries. Whether she knows them personally or not, she nods discreetly but sympathetically to her pals. Does it preserve this culture or does it reject it? Most likely, she is simply presenting it. In this sense, Klebes’ work is itself a “goalless pilgrimage” – painting as wandering and discovery.

According to Bill Ramage, who curated the exhibition, Klebes “photographs people everywhere. Then she takes those individual people and places them in a sort of collage.” An artist and Emeritus Professor of Art at Castleton University, Ramage is responsible for bringing art to various spaces in Rutland, in particular the 77 Gallery, in collaboration with developer Mark Foley. Ramage discovered Klebes’ paintings through a college connection: Klebes’ mother, President Karen Scolforo, had her daughter’s paintings hanging in her office. 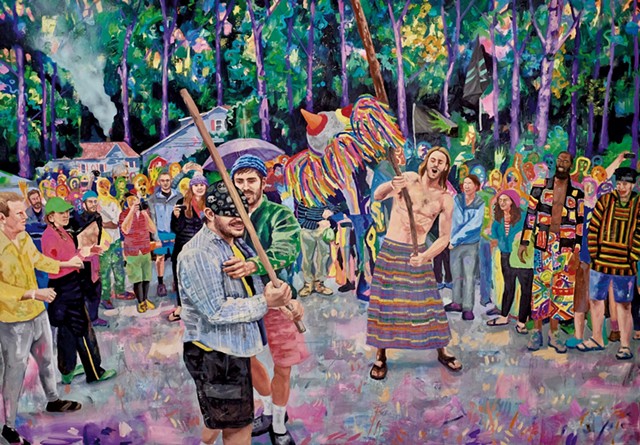 Klebes, based in North Adams, Mass., earned an MFA from Lesley University College of Art & Design in Cambridge in 2017. Her work has been exhibited in galleries and museums in Croatia, Pennsylvania, West Virginia, Massachusetts, Colorado, Vermont and Florida. Klebes is currently artist-in-residence at MASS MoCA and will be in residence at Vermont Studio Center in March.

While his works focus on people, Klebes’ landscapes are also intriguing; some paintings may appear complete even though the human subjects have been removed.

In a piece called “Aimless Pilgrimage”, seven people sit, stand or walk around in what looks like a vast field of short grass. It is the end of the day, and darkness, possibly accompanied by a thunderstorm, sets in. However, the last light browns the yellow grass, and the horizon seems illuminated with colors like the northern lights. A tall tree appears to be full of birds, fruit, or flowers.

In this setting, two characters approach the horizon line of the painting and seem to dissolve into it. The line literally crosses them; distant trees and grass grow over them, and their faces become blotches of paint. 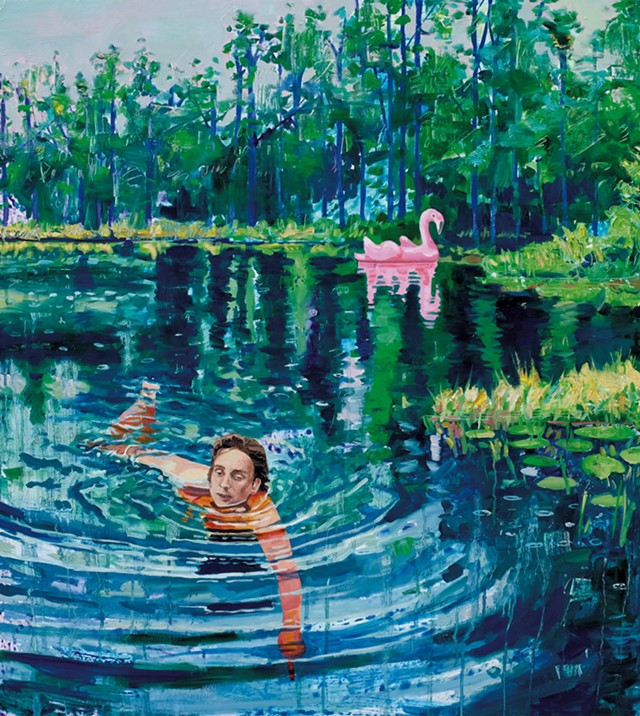 In her artist statement, Klebes explains, “I use a cool, colorful and unnatural palette to highlight disconnection and lack of intimacy.”

Ramage notes that Klebes goes “from looking almost photorealistic where she wants you to focus, and then where the paint is like it’s just been slapped. She sort of manipulates the whole thing of focus, but she does it in such an interesting way.”

His work also recalls the writings of British author JG Ballard: “Deep End”, for example, in which a solitary figure emerges from an empty swimming pool in an abandoned amusement park. Klebes offers a vision of loneliness and alienation, perhaps inflamed by disillusion. That may be what she sees among her peers, but Klebes seems to be aiming in the right direction.