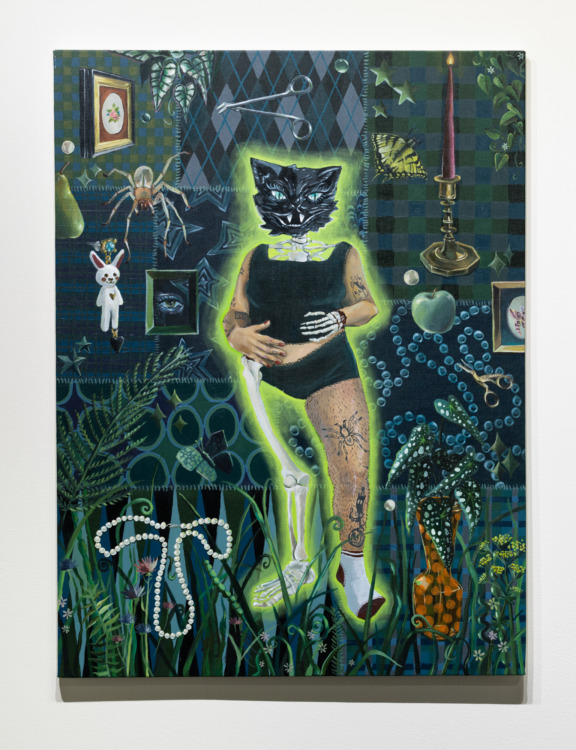 What could a house on fire, a silhouette of a pumpkin and a hypnotic spiral have in common in a gallery? These amusing elements find root not just as occult curiosities, but as seminal tropes in twelve new paintings by Portland-based painter Olivia Faith Harwood. Currently playing on Fuller Rosen Gallery through March 13, 2022, “Possessions, Possessions” entertains the secular as well as the spiritual. This new series of works, while rooted in the artist’s personal world, aims to overturn our understanding and appreciation of the limits of perception.

There is an innate dissonance between the tangible and intangible worlds that Harwood links to his own narrative. Her ability to weave the banality of dice, a dog, a pearl necklace into her feverish dream settings demonstrates the power of the canvas to mystify and enchant viewers. In haunted figure the subject is a self-portrait by Harwood, with a half-human, half-skeletal body, the head of a black cat replacing his own. This hybrid figure emanates an eerie fluorescent glow, confirming the otherworldly nature of her character. Are they an apparition? How did they come to exist in this composition?

Other objects float in the liminal space of the painting. A candle flame in the upper right corner illuminates the rest of the scene and reflects the ghostly glow of the anthropomorphic feline. A large arachnid descends in the middle of the frame, but a pair of shears hovering to its right appear aimed in its direction, intended to cut its strands of web. Small framed paintings – of flowers and an all-seeing eye – dot the field of patterns that itself appear stitched from a variety of materials. With each observation, new details and furtive visions unfold before the viewer unveils the drama and appeal of the piece.

In appreciation of what might be considered metaphysical materiality, each painting leads us to wonder how to decipher the complexities it contains. Ritual depicts a fallen winged figure, curled up on the ground. Flanking this long-haired figure are two nude angels, a nondescript nude in a devilish mask on the right, and a looming wolf figure on the left. These four figures observe the creature at rest while a fire rages in the background. The fleeting shadows of other beings are backlit as they engage in what we can understand as ritual dance and communion. Although we may not be privy to the backstory details of the central figure, the auxiliary figures indicate a sort of bacchanalian reverie.

Ritual has a dotted surface and thus offers an interesting juxtaposition with rise and fall displayed alongside on the gallery wall. The latter presents gallery owners with the image of a two-story pink house seen burning in the middle of a green pasture. In the foreground is a white and orange dog leaping across the frame, all around float an assortment of game pieces. Ritual appears jubilant and ceremonious, rise and fall presumes an ominous aura with its thunderous lightning and dark skies. The blazing fire as a recurring symbol, when emphasized, seems too incidental to be anything other than intentional. In this direction, rise and fall is reconfigured as the flip side of the supernatural ritual observed earlier. The eyes we see in the glare of Ritual become the literal windows of the house on fire in Increase and decrease. The fluffy spotted dog at the end of the lightly inflamed tail roams our field of vision, as if one imagines the canine capable of leaping from web to web to join its companions.

Painted in smooth, even strokes that could also speak of the dog’s hasty determination, rise and fall further blurs our senses. Despite the perilous landscape, the inclusion of game pieces – dice, jacks, pawns – subsumes the work in the playful, if sometimes disorienting, collective inflection of this exhibition. For Harwood, these works oscillate between comfort and threat. As she explained to me in an interview: “This combination…not only creates visual tension, but [an] emotional strain for the audience. [That pushes] I want to create an unsettling feeling and attract the viewer for as long as I can. The characters, motifs and objects I depict in my work are sometimes familiar to the audience, creating a sense of recognition and security. But burning houses, poisonous spiders and smiling malevolent faces create a haunting reaction.

Power and The eyes are mosaics are other variations on self-portraits that both have the magical ability to delight audiences through the direct gaze of the artist. Visually implicit in The eyes are mosaics is a half-bead, half-chain coil, which at its center represents Harwood’s own likeness. As our view is drawn to the center, the focus shifts from the cobwebs and stars painted in the background, blurring and achieving an ever-moving effect. As if dizzying, the subject of this work calls us to him as if he might have all the answers. Power in turn attracts gallery visitors more openly; there is no bewitching spiral, only a caricature of Harwood as a buffoon, frowning, smirking, twinkling in his eye. She pictures herself wearing a necklace as an accessory for that person, but it is not made soft or cloth-like. Instead, he seems heavy, like a block or pedestal on which his head floats and evokes authority from within the frame. There is no escaping this direct gaze, and once locked up, we can only guess its intention to keep us there.

Inspired by youthful symbolism, lived experiences and consideration of a turbulent and dark present, this collection of paintings assumes a prophetic quality. As self-portraits, Harwood is both author and vehicle of the larger narrative at play. Viewing the paintings as a unified suite, what these works have in common is a mastery of manipulation. The word “possession(s)” in this exhibition presents a triad: that of possessing and having, of possessing; the object held, the possession; as well as the state of being under the control of an external force, of being possessed. Each of them is visible in the works in general: a melancholic clown captured in solemn blues and grays; dolls, moths and shiny crystal balls hovering in the air; Harwood’s sly jack-o’-lantern face winking mischievously at his audience. Maneuvering between these three senses becomes the game in play, and it is up to the spectator to find their place on the game board.

In this fantastic inaugural exhibition, Harwood demonstrates a powerful understanding of conceptual complexity. With the artist’s distinctive treatment of her subject, visitors can understand the depths to which she is tied to tokens of her imagination. The surreal landscapes inspired by these works affirm an ethereal permanence which, although whimsical, has deep roots in the author’s consciousness. In this way, the paintings take on a divine nature, untouched by country old-fashionedness, and take on a bold endurance in both this and any other realm.

“Possessions, Possessions” is playing at Fuller Rosen Gallery until March 13. The gallery is located at 1928 NW Lovejoy Street and is open Thursday through Sunday from 12 p.m. to 5 p.m. or by appointment.

Luiza Lukova is a writer, poet and visual arts curator. Her academic background is in postmodern art history and literature, with a particular fondness for abstract expressionists and confessional narrative. She is co-founder of homeport, an untraditional backyard gallery space in Southeast Portland. His other critical writings can be found at Practical Art, Art & About PDX, 60 inch center, and others. Born in Bulgaria, she currently lives and works in Portland, Oregon. More of her work can be found on her website.