The pandemic has forced the Shelburne Museum close last fall, but reopened in June with an appropriate celebratory display. “New England Now: People” features positive portrayals of all kinds of humans. Ten artists created these mostly large-scale works in a variety of mediums.

In a series of black and white photographs, drag queens help each other prepare for a performance; in another set, economically disadvantaged people party in backyards and bars. In one painting, a cleaning lady crouching in front of the toilet is dressed in the sparkling helmet of a Brazilian deity; another features an active crowd made up of dozens of images of the same man, dressed in a red plaid shirt and yellow beanie, climbing and posing along a rocky Maine shore.

The exhibition is a joyful expression of the richness of identity itself.

However, the show acquires a certain gravity when a viewer considers the context of the work of these artists. The concept of the “New Englander”, with its name as a colonial vestige, is accompanied by certain associations and hypotheses. The colonies that became the six states we know today began with the founding of Plymouth, Massachusetts by freshly landed White Puritans from the Mayflower.

That the region developed by capturing, enslaving and killing the indigenous inhabitants is often overlooked. Instead, iconic New England paintings such as “Breezing Up (A Fair Wind)” by Winslow Homer and “Freedom of Speech” by Norman Rockwell celebrate whiteness, not to mention an ideal sort of masculinity.

In contrast, this exhibit embraces inclusiveness of all kinds.

“New England Now: People” is the second in a biennial series launched by the Shelburne Museum in 2018. “New England Now” featured landscapes that went beyond the region’s iconic postcard image. Associate curator Carolyn Bauer, who organized the two iterations, said the series is intended to showcase contemporary regional artists whose work “challenges perceptions and misperceptions” about the North East.

“People are a big topic,” said Bauer, guiding a reporter on the current show, “So the focus is on how contemporary artists challenge traditional portraiture. ”

She added that the works “are not about physical appearance but inner identities.” In fact, both aspects of identity are visible throughout the show.

Bauer explained that “People” represents the six New England states through the current or former residence of the artists. Some ties to the state are tenuous, she admitted: Cobi Mussels, creator of these multiplied self-portraits, lives in Philadelphia but designed his series “Woods Just Wanna Have Fun”, while he lived in Boston 13 years ago.

Three of the artists live in Vermont: the talented portrait painter from Middlebury Kate gridley; performance artist Toby Mac Nutt of Burlington; and photographer Evie Lovett, born in Putney, who shot those drag queens backstage at a Dummerston bar. 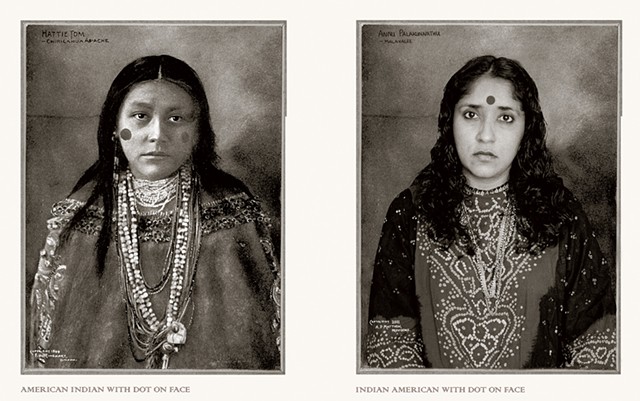 The artist with the best sense of humor on identity is Annu Palakunnathu Matthew, who lives in Providence, RI, and teaches art at the University of Rhode Island. Born in England to Indian parents, Matthew grew up in India at the age of 11. After moving to the United States, she discovered that Americans often asked her “what kind of Indian” she was. “An Indian from India” became the title of his fascinating and disruptive series.

In it, the artist plays on historical photographs of Native Americans, including those of Edward S. Curtis, who staged his portraits, in defiance of tribal customs and historical accuracy in favor of images. romanticized. Matthew creates diptychs by associating these photographic portraits with snapshots of herself.

In the latter, she is dressed and posed in the same manner as the subjects of early 20th century photographers, but with exaggerated markers of her own Indianness: a large red bindi on her forehead, a glittery head veil. In commentary on the reducing effects of colonialism, the two “Indians” are presented as interchangeable, with a few details. (In some cases, Matthew masquerades as the colonized man pictured in the historic photo.)

“It’s definitely loaded,” Bauer said of Matthew’s work. At the same time, she adds, the artist calls her diptychs “handshakes” across cultures – a recognition of their parallel experiences.

A sort of reverse mythology unfolds in a Massachusetts artist’s home Sammy Chong‘s three canvases. Each of them shows what we now call essential workers, as Bauer pointed out – immigrants doing the difficult and often unrecognized work of cooking, harvesting and cleaning – while wearing masks of mythological figures from their country of origin. Chong paints the portraits of his subjects on screen-printed photographic collages that depict their rich cultural histories.

In “Water Queen”, for example, the face of the woman who cleans the toilet – hidden by the helmet of a Yoruba water spirit – is roughly parallel to a silkscreen image of Pelé, the Brazilian soccer phenomenon. , on the wall behind the toilet.

Chong’s “Food of the Land” shows a Mexican farm worker wearing a Mayan mask walking through a field; images of Chichén Itzá and other ancient pyramids are embedded in the sky and the mountains behind it.

The exhibition includes a video installation: a 15-minute compilation of excerpts from a much longer performance by MacNutt. On their website, MacNutt identifies himself as “a queer, non-binary-trans, disabled multidisciplinary artist, author and teacher.” Their work explores, among other aspects of their identity, “the unique aesthetic of disabled dance”.

MacNutt suffers from chronic pain caused by a connective tissue disorder. Yet only the joy of movement shines through in the video, in which they brandish arm stilts while draped in a purple cape. MacNutt swivels like another pair of legs, the fabric swirling in the air.

A work commissioned for “New England Now: People” is the most visually striking: the 106-by-108-by-10-inch circular hair weave, titled “Oculus” by Nafis M. Blanc. In disproportionate proportions, the work references the traditionally tiny Victorian-era weaving of locks of loved ones’ hair into jewelry or mourning wreaths.

“Oculus” uses synthetic hair in a variety of colors, woven into swirling patterns of braids, cornrows, and other black hairstyles. White, who lives in Providence, honors all three parts, so to speak, of his identity with this play: African, African American and Scottish English.

The most moving works in the exhibition are eight black and white portraits of Erik Williams, a street photographer from Hartford, Connecticut. His series “On the Outside” features the kind of residents who are often invisible: disenfranchised and neglected people, for whom everyday life can be a struggle.

And yet, remarkably, Williams’ crisp and often spontaneous portraits – taken after he gets to know his subjects through conversation – convey a dignity and validation that society doesn’t necessarily accord them. It captures individuals and the beauty they embody, sometimes marred by a difficult life.

In a vertical portrait – the photographer does not title their works or identify subjects by name – an attractive young black couple gazes at the camera with confident, contented gazes. And that’s enough for Williams. “I’m drawn to people who have energy and great character,” he explains in an online artist statement, “because that’s all that really matters.”

2021-08-25
Previous Post: Clean Tahoe artwork uses waste to raise awareness
Next Post: Art review – Resilience in nature: we are the roses that grew from the concrete