It’s no surprise that Vermont is particularly welcoming to the Fae, if you know where to look. Queer oriented Fate of the fairy camp in Northfield in Burlington, artist Emily Anderson Bluebird Fairies annually Fairy house party in Grafton, Green Mountain State is full of opportunities to peek into a smaller and perhaps gentler world.

With reports of family separations, incarcerated children and privileged pedophiles in the news, an escape from reality could be particularly tempting. “Whimsical Wonders: Fairy Houses of Nature by Sally J. Smith,” to Henry Sheldon Museum of Vermont History in Middlebury, offers just such an opportunity.

“I like to live on the fringes of what is considered ‘normal’,” Smith wrote in his artist statement, “and continue to thrive in the liminal spaces between the visible and invisible realms where magic still exists … ”

In a clever move, the Sheldon shows 12 of Smith’s fairy houses in conjunction with a photographic retrospective of the late Vermont landscape architect Dan Kiley. The duo offer visitors an unexpected chance to meditate on architecture as a shared human impulse, as well as distinctions of scale, genre, craft / design, artistry / kitsch, and magic / rationality. . While large, glossy prints depicting Kiley’s sleek Modernist landscapes occupy two exhibition spaces, Smith’s crisp, handmade homes are scattered throughout the permanent collection as if part of a mystical treasure hunt. 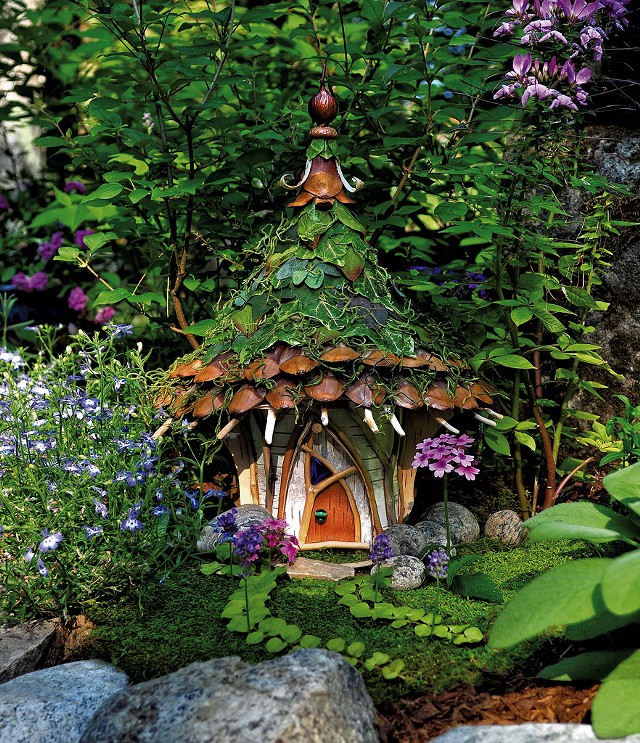 Like so many children raised close to nature, Smith grew up inventing and building small structures from materials at hand – sticks, moss, leaves, rocks. Attributing her creative path to her parents – her father was an architect and nature photographer, her mother a passionate gardener – Smith says: “I was destined to have a deep respect for the environment.

After leaving his childhood home in Shelburne and spending more than 20 years as a professional watercolorist, Smith settled across the lake in Westport, NY. His little houses have also all grown.

The first sign of maturity that one can notice – besides the fact that the houses are in a museum and not in the woods – is the decided mixture of natural and man-made materials. In addition to favorites such as birch bark, moss, mushrooms, pebbles, and grapevine, Smith incorporates faux flowers, beads, store-bought miniatures, and even tiny LED lights. These are not spontaneous and fleeting afternoon concoctions, but premeditated and meticulously crafted studio sculptures. Whether this amount of human intervention is acceptable depends only on the level of purism of the viewer’s fairy house.

Consider the “Fall Harvest” house: About a foot tall, the house appears to be on fire with a sloping roof shaped like a wizard’s hat of fall foliage. Upon closer inspection, one realizes that the leaves cascading under an acorn floret are synthetic. An arched door is made from birch bark and white cedar twigs; its doorknob is an antique green leaf-shaped glass bead – presumably glued. Tufts of green wool “moss” grow between the river stone steps.

For his part, Smith divides his fairy house sculptures into three categories: studio works like the ones in this exhibition, works located in nature that incorporate certain materials brought from the studio, and completely ephemeral works at the sites. natural. When working in the latter category, Smith uses thorns, porcupine quills, or cotton thread to hold things together.

“These houses are left where they are made,” she writes on her website, “and begin to fade into the landscape once the photos have been taken.”

Enticing images of these temporary works can be found in the gallery’s copy of Smith’s Instruction Book, Fairy Houses: How To Make Whimsical Houses For Fairies. 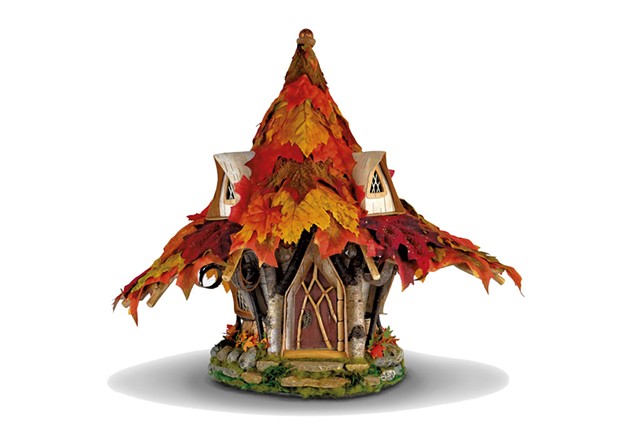 One of Smith’s more rustic structures is the “Adirondack Faerie Lodge”. It looks like something you might stumble upon in the forest and then peek around for some living creatures. The two towers of the house are covered in shingles of tiny mushrooms, each turret proudly topped by a red pine cone. Pieces of dried wild grape tendrils accentuate the doors of the house and seem to reach for the sky.

While children’s fairy houses tend toward simplicity, Smith samples a bunch of architectural influences. Houses like the relatively modest “Dove Cottage” or the Maleficent “Faerie Queen’s Hermitage” are prime examples of whimsical mysticism. On the other hand, the “Tyrolean Tower” and the “Scandia Spirals Manor” pay homage respectively to traditional Austrian and Scandinavian architecture. The tiny “Zenplicity Tea House” not only celebrates the straight lines of Japanese tea rooms, but, as Smith writes, “was also partially inspired by the work of landscape architect Dan Kiley, who loved the use of linear forms in the landscape “.

While fairy houses aren’t everyone’s cup of tea, it’s a pleasure to see this folk art form adopted at the institutional (albeit small) level. Smith’s arts and crafts remind us that the celebration of magic and play isn’t just for kids, and we never have to grow up – at least not. all the path.