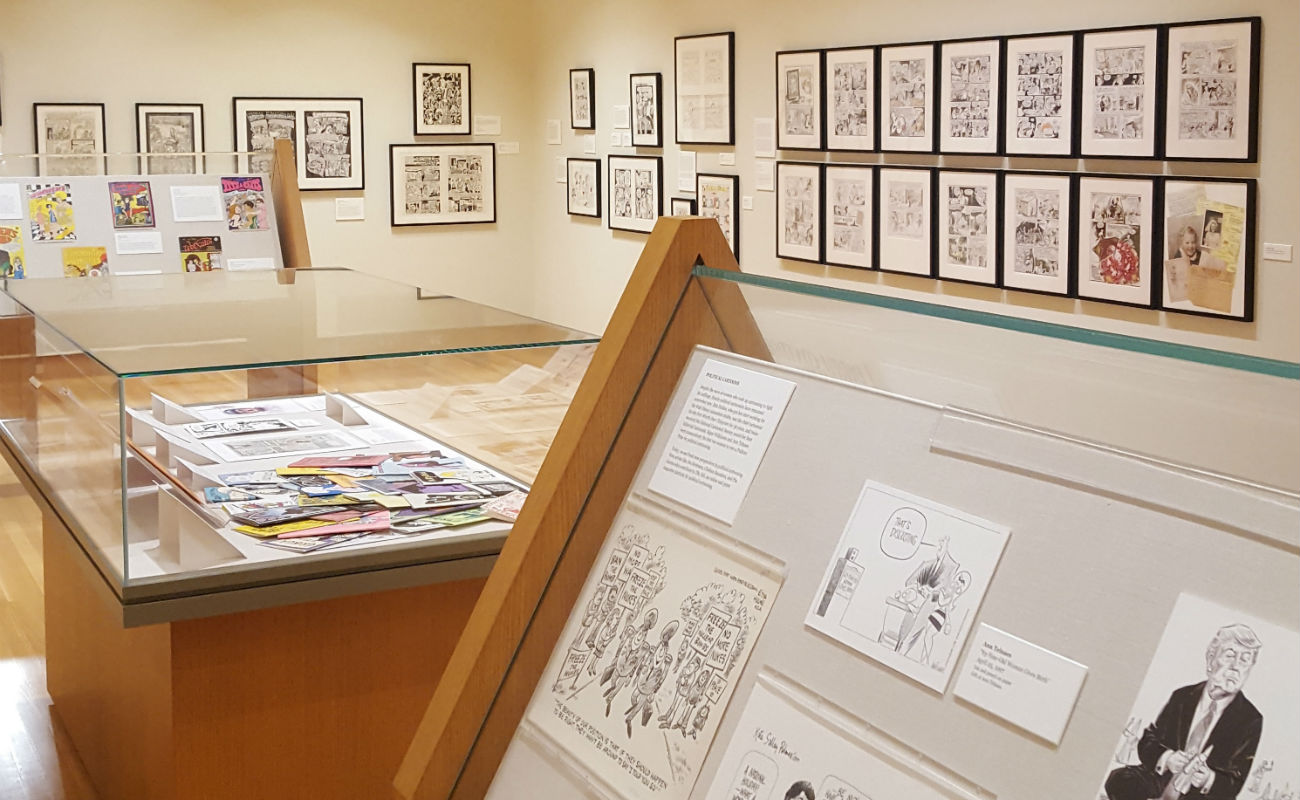 It is no coincidence that Ladies First opens with a series of political cartoons promoting women’s suffrage. After all, this year marks the centennial of the ratification and passage of the 19th Amendment. You can think of no better way for the Billy Ireland Cartoon Library & Museum to celebrate this milestone than by highlighting the contributions women have made to the cartoon medium.

As curators Caitlin McGurk and Rachel Miller point out, this exhibition is as much about innovation as it is about representation. The point here is not only that women are (and always have been) active in the field, but also that they have moved the medium forward in surprising and creative ways. Moreover, these contributions occurred in an environment that was often detrimental (if not outright hostile) to women. To prove the point, Ladies First features a number of artists who have advanced their careers by adopting male aliases.

Given that cartoons, especially political cartoons, had the ability to reach large audiences and shape public opinion, it’s no surprise that women’s voices weren’t always included. As Alice Sheppard points out in Caricature for the suffrage; “The role of the political cartoonist is considered masculine because it wielded power and served as a vantage point from which to explore and ridicule…“ Moreover, political cartoonist Rayma Suprani observed in her recent TEDWomen Conference 2019“A political cartoon is a barometer of freedom.”

Unsurprisingly, opponents of suffrage used their vantage point to publish cartoons depicting suffragettes as hostile, raging harpies. One of the first tasks of pro-suffrage cartoonists then was to reframe the suffragettes as intelligent, ordinary women with reasonable demands. At this point, the political cartoons of Ladies First present textbook examples of how to use the power of images to capture narrative and reshape conversation.

Beyond these political cartoons, we see examples of innovation in both form and content. At Rose O’Neil’s Kewpie the cartoons promoted a progressive agenda while supporting a juggernaut of merchandising that served to further increase O’Neil’s influence. Jackie Ormes Single Panel Patty Jo ‘n’ Ginger cartoons of the 1940s and 1950s pushed back against racist stereotypes by portraying a pair of African-American sisters as elegant, intelligent, and outspoken. The cartoon’s popularity allowed Ormes to market a Patty-Jo doll; a toy renowned for its high-end wardrobe and positive portrayal of young African-American women.

Similarly, storytelling innovations abound. Whether it’s the real-time aging that characters experience in Lynn Johnston For the best or for the worst, the trials and daily labors of Cathy Guisewhite Kathy, or the provocative stories featured in anthologies like twisted sisters and Comix by Wimminit’s clear that the scope of storytelling – both in terms of what could be told and how – was expanding.

Women figure prominently in the rise of the modern graphic novel. Carol Tyler’s short story Hannah’s story (originally published in Drawn and quarterly), foreshadows much of what made this format so compelling. Told in the first person, Tyler presents an intimate family story; skillfully illustrating the emotional range the comic could include while focusing on the characters’ rich inner lives. It’s hard to imagine works like Alison Bechdel’s fun houseby Marjane Satrapi Persepolis or even Jerry Craft’s Newbery Award new child without the foundation that Tyler and others had laid.

Together, these voices, these stories and the way they are told represent perhaps the greatest innovation present in Ladies First. Through this sweeping collection of artists spanning a century of creativity, we see women expanding the narrative, pushing the boundaries of what and how can be told. With a compelling combination of honesty, intimacy, vulnerability, humor and anger, the women of Ladies First develop the genre. They enlarge it. They make it better.

Ladies First: A Century of Feminine Innovations in Comics and Cartoon Art can be viewed until May 3, 2020 at the Billy Ireland Cartoon Library & Museum, 1813 N. High St. For more information visit cartoons.osu.edu.