Before even seeing Kevin doneganfrom the exhibition of mixed media assemblies, you could deduce its theme from the title: “Your basket is empty”. Did you guess that the artist is concerned with unbridled consumerism? The lightness of our culture to have it now? (Click!) Or maybe the waste, the environmental cost? All is correct.

The phrase “Your cart is empty” will be familiar to anyone who has ever made a purchase online. While seemingly a neutral statement of fact, it may sound like a virtual taunt: An empty cart threatens FOMO retail.

Donegan’s exhibition, which opened last week at Flynndog Gallery in Burlington, tackles a generative subject: what we acquire and what we throw away. But it also confronts viewers with a more nuanced sense of waste. Using the spare iconography of shopping carts, recycling bins and trash cans and the “middle” of trash, Donegan put together a reflective and provocative display. The metamorphosis of the materials found is ingenious.

In fact, your first thought on entering the Flynndog is likely to be Wow. A dozen assemblages – dominated by parts and permutations of real shopping carts – sit on the floor, hang on the walls, and hang well above eye level. Some images are painted directly on the latex wall. Others involve a lot of packing: think Christo meets the wool bomber.

“Your Cart Is Empty” makes you look, look again, and see things differently.

Not a standard white box gallery, the Flynndog is a long, wide room with a high ceiling and a lingering aura of the building’s industrial past. A number of studio doors punctuate its west side, and the lobby itself is a hallway leading to Nomad Coffee at the other end. It is a functional space with daily foot traffic. Donegan’s installation works creatively with both its limitations and its benefits – in part by taking it high.

Upon entering the gallery, viewers might not even notice the overhead 30-gallon plastic bin, tilted to tip over a mass of colored thread. (Donegan calls this “Tough.) But you can’t miss the revamped road sign sticking out of the wall that says” No shopping on this side of the street. ”

At intervals along the wall near the ceiling, Donegan painted large cart icons in dark gray latex. Underlining the theme, a big red zero is placed inside the baskets of the cart. The simple line drawing, with two dots for wheels, is consistent with the symbolism of public communication.

Some pieces combine the mural with a three-dimensional element. For “Exhausted,” Donegan painted a black parallelogram on the wall and added a rusty rectangular grid to one end; the broken basket of a red shopping cart protrudes outwards. Two thick chains hang from the back of the structure. The result is a minimalist abstraction with an attractive contrast of colors, textures and angles.

Donegan’s use of found materials goes against a consumerist philosophy, of course; he states in his artist statement that all of the wagons and other items were found abandoned around Burlington, including near the train tracks. In some works, he lets the discarded object be himself, such as the rusty cart frame parked next to a mural of the missing basket. Other pieces are meticulously wrapped in thread. Something in the obsession with effort and the sweet materiality instantly gives this debris the status of sculpture.

The most remarkable – and most laborious – packaged piece is titled “No, no, no, yes”. It consists of a large, intact cart, every inch of which is covered with layers of off-white thread. Set higher than eye level on Donegan’s hand-crafted wooden “dumpster”, the piece commands both attention and admiration.

Two iterations of broken wagon legs and wheels are aptly titled “Mangled, Momified” – “# 1” is circled in off-white wire, “# 2” in black. The vertically oriented “# 1” sits atop a wooden trash can found and painted white; a person icon painted on the side extends an arm in a gesture of rejection. 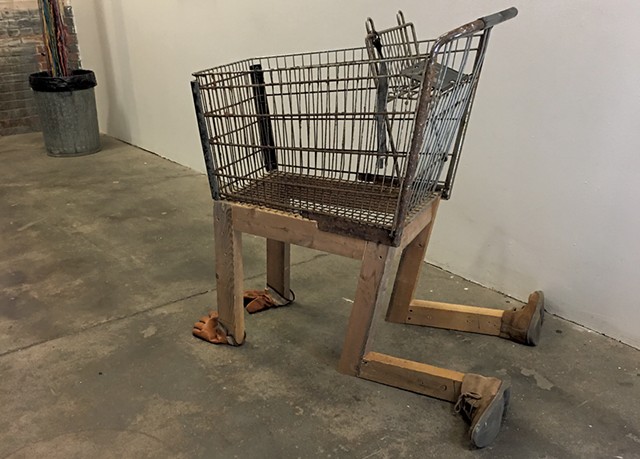 Donegan placed “2” on his handcrafted version of a recycling bin. The crumpled, black-wrapped metal has an elongated shape and looks strangely relaxed.

The anthropomorphization is glaring in “City”, a cart whose legs and wheels have been removed. Donegan placed the basket on a wooden structure that suggests a person on all fours. A pair of leather work gloves on the front and desert boots on the back leave no doubt about the meaning.

Adjacent to “City,” a mural titled “Re-e-valu-ate” also eschews subtlety, but is cleverly constructed. A rectangle of plywood is cut and hinged to allow it to fold back on itself diagonally. One side is painted to look like a $ 5 bill; on the other, a negative space painted in white defines an unpainted human torso and a handcuffed hand.

These pieces, placed at the end of the gallery, unnecessarily hammer home the point linked by Donegan’s capitalism. However, they do not eclipse the many works in the exhibition which encourage viewers to reflect, to question themselves and to question themselves. “Your Cart is Empty” is full of messages, and one of them is: Look at our transformational capacity.