The soundtrack is perhaps the first thing visitors notice about “Falling Into Language: A Travelogue”. This is the title of the conceptual artist Kaylynn Sullivan Two Treesimmersive installation of two-dimensional framed video and artwork in a gallery on the second floor of Burlington’s BCA Center.

Accompanying an 18-minute video that TwoTrees created using his own works on mixed paper, the track begins with a buzzing sound reminiscent of the moment the monolith appears in the film. 2001: A Space Odyssey. The sound becomes more and more complex, gaining layers of whispered syllables, breaths and sung notes until it becomes almost haunting.

It is the first signal that the artist gives to visitors so that they let go of the need to understand or to impose a meaning on his installation. TwoTrees is interested in the idea of ​​a time outside of language – a time of universal inheritance before people are fragmented and divided by languages. She uses vocables – “words” made up of sounds without regard to meaning – as a vehicle. Although it is not clear who “falls into the language” in this exhibition, the journey appears to be a shared journey, open to all.

Evidence of this trip covers the other walls of the room. Seven framed works contain torn pieces of paintings made of textured paper, collage and acrylic ink that resemble those shown in the video. Like archaeological traces, these fragments are labeled as in an explorer’s diary: “Map fragment with possible legend – Ancestor journey 7CXX.03” or “Unknown script with pictogram (Apis mellifera)” or “Pattern fragment of navigation – Superclusters VC 1794 ”. 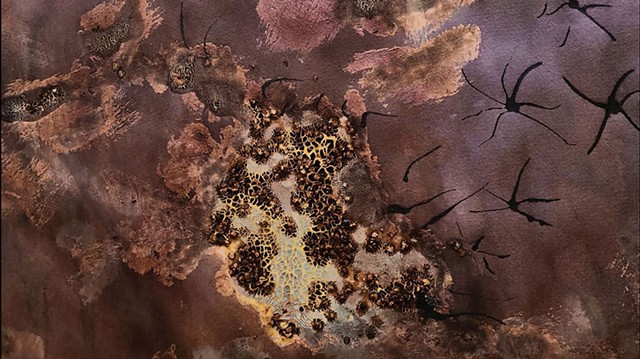 As a whole, this mythological travelogue seems to tell a story. In the video, the camera moves slowly and zooms in on the works of TwoTrees. Ken Burns-style close-ups reveal various textures and markings – crackle burns, crater-shaped ink spills – but the view never widens enough to show the edges of the works. As a result, the footage resembles a video journey through the topography of an alien planet or an uncharted corner of the universe.

The torn fragments on the walls, on the other hand, are like the rubbish of those journeys. Fixed and labeled as specimens, they appear to be an attempt to impose meaning on the remains through language.

During a phone call, TwoTrees, who lives in Hinesburg, explained an impetus for their project.

“I’m in my seventh decade, and knowing that you have less time made me want to leave something in the world that was about ancestral lineage before the separation,” she said. “People say we are made of stardust – a lot of cultures do, and one of my ancestral cultures is one of them.” (TwoTrees is of Lakota European ancestry, black and white.)

“I wanted to take it literally,” she continued. “If we are made of stardust, what does it mean to tie into our cosmic destiny? To let go of our languages, our cultures, our separation? ”

TwoTrees said she started the project in 2017 and made at least 70 paintings on mixed paper over three years. For the video, produced over six months in India with the help of two Bollywood specialists, she filmed all the works, then tore them to create the framed fragments.

“I wanted to say [the paintings] be a musical score. They were meant to be sung, ”she said. 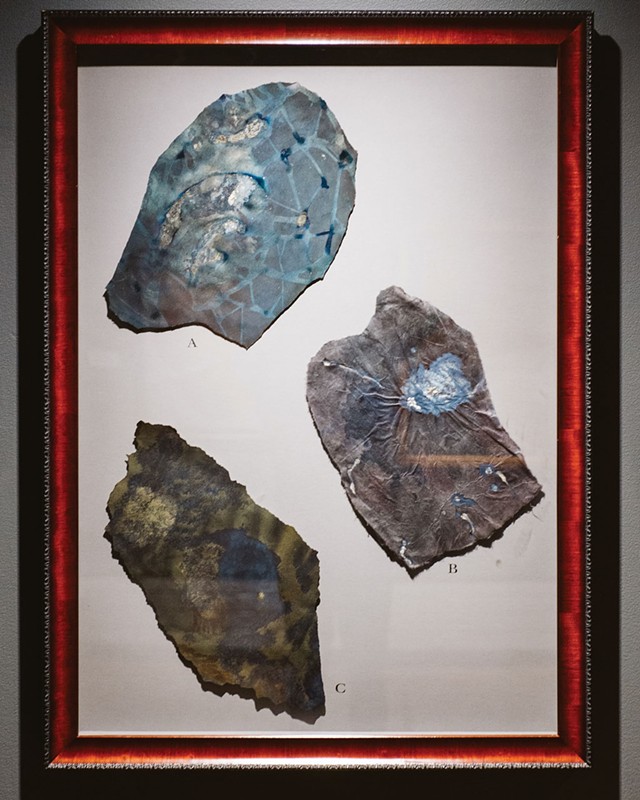 Back in Vermont, where TwoTrees has lived full time since 2012, she found two singers to do just that: Heidi ann wilson and Gideon Crevoshay. Both are workshop leaders with Village harmony, the Marshfield-based choral project. Wilson had collaborated with TwoTrees on the latter’s installation “Of Land and Local” in 2015 at Shelburne Farms, titled “Natives, Slaves, Settlers and Visitors – Seen and Unseen”. Crevoshay has performed around the world and recently became a member of the Meredith Monk’s House Foundation for the Arts.

The soundtrack to the show has several iterations, TwoTrees said. The current one features Wilson and Crevoshay. In mid-July, it will be replaced by a piece featuring two musicians that the artist met in India: Yuji nakagawa, a Japanese-born sarangi player; and singer Shruthi Veena Vishwanath. A third soundtrack, which will be installed in the fall, will emerge from two virtual workshops on the vocables that TwoTrees offers to the public.

BCA Curator Heather Ferrell discovered TwoTrees when the artist invited her for a studio tour while she was creating “Falling Into Language”. Much of the project won over the curator.

“It was fascinating to see how it all came together: the international collaboration, the sophistication of non-verbal language exploration, [the idea of] a universal subconscious, ”Ferrell recalled on a phone call. “It’s a very intangible thing to capture in a work of art, but I think the show does it beautifully.

“Also, the idea of ​​you doing all these paintings and then tearing them up,” she added. “They are not precious. They are more than just paintings.” 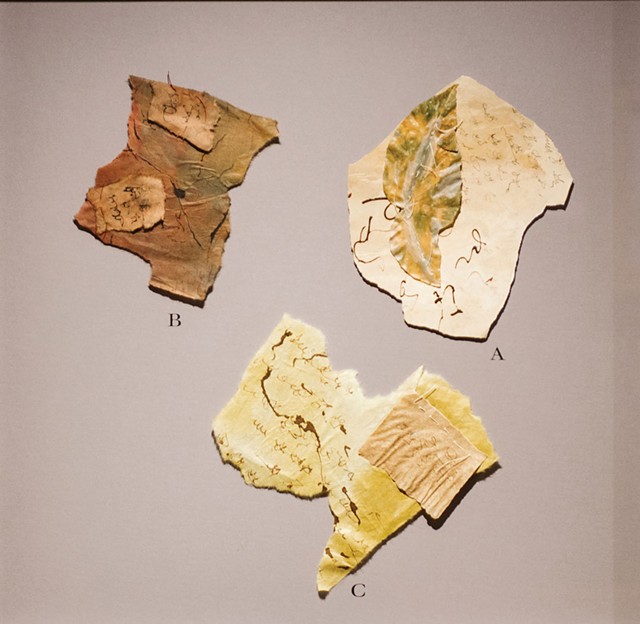 Ferrell selected TwoTrees to receive financial assistance from BCA to carry out his project. The artist has also won a Development Fellowship and a Creation Fellowship from the Vermont Arts Council.

As Ferrell pointed out, the identity of TwoTrees tends to be central to his work.

Describing “Natives, Slaves, Settlers and Visitors – Seen and Unseen,” TwoTrees said the installation explored the different groups of Vermonters listed in its title through their oral histories, whether they were victims of eugenics, whether they were farmers. blacks in Hinesburg or the Abenakis tell the story of their people. history of creation. Each section also incorporated images of its own ancestors. “I was trying to figure out how I fit in here,” the artist said.

“Falling Into Language”, on the other hand, attempts to go beyond the current identity politics, which TwoTrees finds limiting.

“I’ve spent my life working on diversity and equity from the perspective of standing at the crossroads of those identities, but [now] naming and claiming an identity makes it seem like things are getting very crowded, ”she said.

“Falling Into Language” is intended to allow visitors to “fall into sensing rather than creating meaning,” TwoTrees said. “I hope it invokes, evokes, maybe even brings about a memory – a feeling – of something bigger and vaster than the boundaries we put around ourselves.

“This is the road traveled by my Aboriginal elders,” added the artist. “They’ve always talked about what we can know when we open up to something bigger than ourselves.”

2021-06-30
Previous Post: ‘Quiilts on Barns’ has a new work of art in Burlington |
Next Post: Rap music still doesn’t fit the bill of an art journal