Central Vermont Artist Janet Van Fleet has often shamelessly referred to social, political or environmental realities in his work. Perhaps his sculptural works made of buttons don’t exactly call for revolution. But her use of mundane and found material is itself a sort of statement, and her wry sense of humor puts her in good company with designers ranging from famous sculptor Alexander Calder to self-taught artists who assemble rubbish into comic facsimiles. of the human condition.

Van Fleet’s current exhibit, “Vanishment” in the lobby of the Vermont Supreme Court in Montpellier is a message and not LOL. And this message, if it does not make the news, is worrying: humans are killing other species on planet Earth at an alarming rate.

In the wall text, Van Fleet cites findings from a 2018 World Wildlife Fund report, saying that the biomass, or total aggregate weight, of non-domesticated animals has declined by 60 percent since the 1970s. In other words, nearly two-thirds of animals that are not our pets or our food has been missing since “The Mary Tyler Moore Show” was hot. Among terrestrial mammals, humans now represent 36 percent of the biomass; their livestock and pets account for an additional 60 percent. 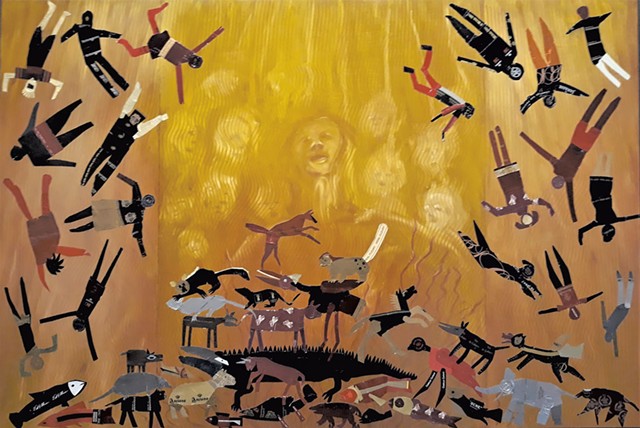 Overall weight might not be the most interesting topic of discussion, but the numbers are appalling. Wild animals are “disappearing”.

In his collages of paintings and installations here, Van Fleet addresses the deplorable state of Homo sapiens‘right of predation and non-collaborative relationship with the rest of the natural world. In keeping with her craft, she uses materials found and collected including tin foil carefully extracted from wine bottles, tiny plastic toy store animals, a selection of her own 20-year-old paintings from a closet. storage and, yes, buttons. With these recycled materials, Van Fleet creates an elegiac allegory.

The front room of the lobby and gallery features eight paintings – the oldest reworked with additions of aluminum foil – that form a sequence. They take viewers from an imaginary time when humans and other species were equal (“The Beginning”) to the presumed present (“The End”), when that balance was irrevocably lost.

Van Fleet’s earliest oil-on-cardboard paintings, executed in sepia and terracotta tones, tended to feature ghostly faces or human figures floating – or falling? – in the space. Sometimes the figure is wrapped, mummy-like, in white stripes. In “Communication Attempt”, for example, the fifth painting in this series, these white stripes form the outline of a non-gendered human body, with a skeletal structure visible below. The character’s arms are raised in the “under arrest” pose. Eight birds made of wine leaves flock around his head and shoulders. The meaning of the painting is as transparent as the body of the character. 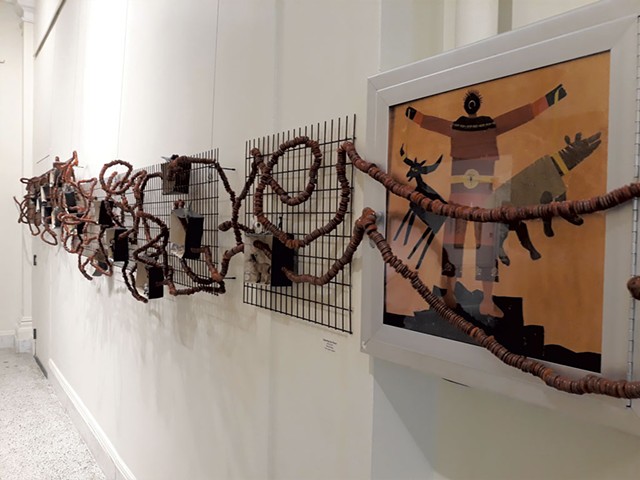 In another work in the series, “Irreconcilable Differences,” nine of these mummified figures cluster together, photographed from shoulders up, as more than a dozen aluminum fish swim above them. In the background, several of these ghostly human shapes float / fall in a sepia toned sea.

Van Fleet created a long, narrow wooden container for his installation “Stromatolites for the Next Age”, which sits at one end of a marble counter. In the frame appear numerous vermicular projections composed of dark red, black and white thread buttons, some of them surmounted by tiny plastic human figures. Look up the definition of “stromatolites” and you will likely find this: “a limestone mound made up of layers of lime-secreting cyanobacteria and trapped sediment, found in Precambrian rocks as the earliest known fossils.” Van Fleet’s intention with these creations is unclear, but their sprawling, disorganized mass is both endearing and baffling.

At the back of the room, a long wall installation titled “Digesting the Planet” uses hundreds of buttons strung on thread, this time in the shape of a twisted and exhausted intestine. This is attached to a metal grid. Small, lidded boxes are periodically inserted along the colon, facing the viewer to form miniature scenes. They contain small plastic animals such as buffaloes, anteaters, wild cats, wolves, squirrels, wild boars, camels, rhinos, turtles, primates and polar bears. Here, too, the intention does not need interpretation. 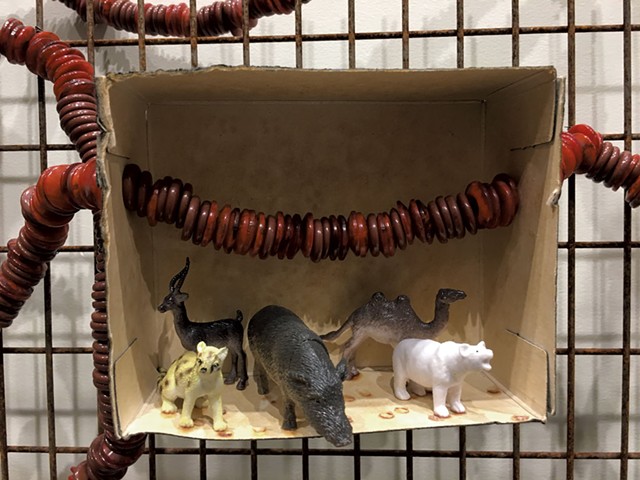 On the opposite wall, Van Fleet installed a shorter horizontal piece called “Rivers of Blood”. Originally produced for an exhibition in New York in 2004, the tripartite painting quotes the Book of Amos: “Woe to you who desire the day of the Lord! What end is it for you? The Lord’s day is darkness and not light. ”In this river of blood, bones float under a black sky.

In “Vanishment”, Van Fleet delivers a clear message through disturbing yet engaging artwork. And the location of the exhibit is both coincidental and ironic: perhaps only the courts have the power to curb the worst instincts of humans.