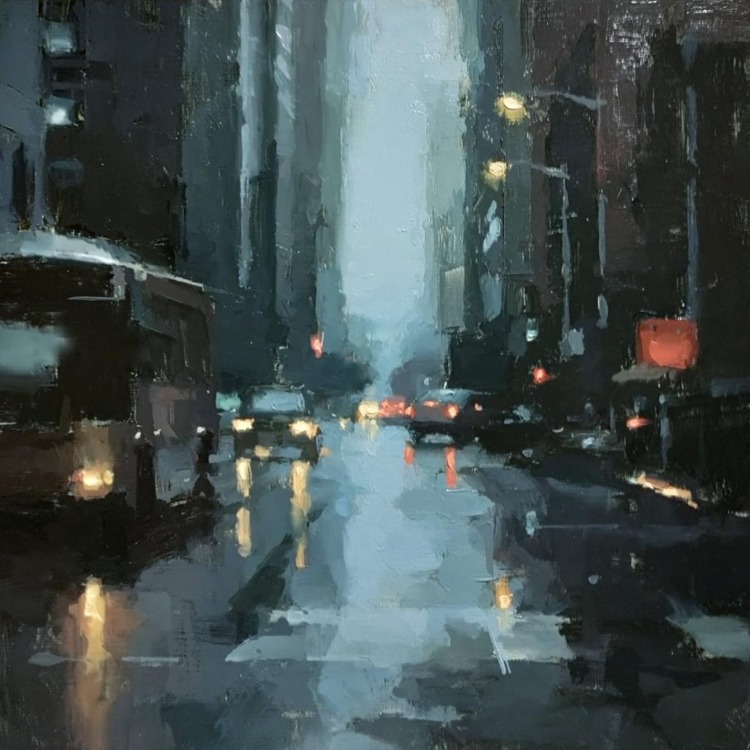 by James Kroner Twilight half-life (SF) depicts a rainy city street just before dark. Gray tones dominate the oil painting on panel. The colored spots represent the light produced by humans: emitted by a bus, cars, street lamps and street signals. Our view is from the middle of the street. The one-point perspective draws the viewer to an inclined car near the center of the composition. The car is parking or driving away, or maybe waiting for someone. It’s a bit of a story for a painting that otherwise has no one in it.

People are involved. We assume there are passengers inside the vehicles and pedestrians walking in the shadows along the buildings, but we cannot see any of them. If I had seen this painting before March 2020, I would have looked at it differently. But now I notice the lack of people. I asked Kroner if he intentionally left them out.

No, he said he hadn’t even thought of that.

But Kroner thinks a lot. Gallery owner Karin Clarke describes him as “a thinker”. She not only admires his skills, but also his approach, which includes keeping journals to record observations about process, philosophy, or design. She knows her way of working because Clarke is not only the owner of the Eugene Gallery that represents Kroner, she is also one of Kroner’s students.

New Paintings: Urban and European Works, on view until February 26, is artist James Kroner’s second solo exhibition at the Karin Clarke Gallery. He is new to the gallery and younger than the other artists Clarke represents by a generation.

The gallery focuses primarily on North West landscapes and celebrates its 20and birthday this year. From the start it has been a place to showcase the artwork of his parents’ generation, including his father, artist Mark Clarke (1935 – 2016) and mother Margaret Coe (b. 1941) who have both studied art at the University of Oregon in the 1970s. Mark Clarke later worked at the Jordan Schnitzer Museum of Art on campus. The work of both parents was recognized in a double retrospective exhibition at the JSMA in 2017-2018.

James Kroner was born in 1978, the year Margaret Coe received her MFA from the University of Oregon. Yet it was Coe who introduced Kroner to her daughter, as she had introduced many other artists in the past.

“Artists follow each other,” says Clarke, explaining how it happened. His mother found Kroner while looking at new art online and began following his work. When he announced he was running a painting studio in Italy, both Coe and Clarke signed and followed Kroner to Tuscany, where Clarke says she had a transformative experience as an artist.

Until then, she had focused on her career as a gallery owner, but when taking the studio to Italy, something clicked and she felt she was emerging as a painter. After her return from her trip, and worked more on her paintings, she offered her first solo exhibition to her Gallery.

I’ve spoken to Clarke and Kroner separately but I’m sure he would be delighted to know, if he doesn’t already, that his European studio has inspired Clarke to feel like she’s finally become an artist. It’s fitting because that’s how Kroner felt after taking his first workshop overseas, and that was his motivation to keep teaching the same workshops.

Kroner graduated from the Academy of Art University of San Francisco with a master’s degree in drawing and painting (2013). But as an undergrad at the same art school, he felt jaded about painting. “You just have to follow the movements in class,” he says. Then he applied and received a full scholarship for a study abroad program in Italy. It was his first time out of the United States. He traveled and worked around Florence, becoming interested in the art of Renaissance artists whom he had studied in San Francisco. Seeing Michelangelo’s art in real life, as opposed to reproductions, inspired him, as did the culture, history and atmosphere of the streets. This is where he realizes the potential of painting.

Other students participating in the workshop took advantage of their evenings to celebrate. But Kroner used his free time to paint alone. He stayed outside until 10 p.m. because that was when it was daylight, he says, and he describes the experience as “life changing”. Thereafter, he stayed in touch with study abroad workshop organizer and painter, Jason Bowen, and returned to the program in 2014 as an instructor. He continued to lead workshops in Italy, Germany and England until the pandemic forced him to stop traveling in 2020.

Outdoors is about how what you see makes you feel, he says.

“Sitting for two hours in one place, you notice things changing and moving.” He links this perception to time-lapse imagery. Looking at a plant, it may seem motionless. But a time-lapse image of a plant reveals that the change is almost constant. It is this idea of ​​movement that he finds so inspiring. To that end, he is fascinated by how light or time can change a scene. And living and studying in San Francisco, he had many opportunities to see a city under the influence of time. When fog arrives on the coast, he says, the humidity in the air is traversed by light.

North Survey is an oil painting on canvas and it is another street scene although this time the view is long and daytime. It’s a “high key painting,” says Kroner. There’s a lot of light but there’s still an atmosphere: “It’s not a totally clear and sunny day.

In San Francisco, the young artist often sought out a hilltop where he could get a better view, see more of the scene, and perhaps some sky and water. North Survey look down a steep street from the top of a hill. It’s a roller coaster view with North Beach in the distance. You feel like you are about to go down the hill and into the water.

Pacific Beach #2 is a relatively small format oil on canvas. When I look at this painting, I see the elements that interest Kroner, as he describes them: “kinetics, light and shadow”.

How to catch a wave? The answer is no. Nonetheless, this ocean painting is all about the constantly changing waves. The painting also moves, between careful strokes and messy smears. The artist’s urban scenes are often realistic with an abstract touch, but this work has a looser touch. Perhaps because of his subject, he approaches abstraction.

You might think that the fascination with light and movement has been touched on before, that it’s old news. Best known are the late 19th and early 20th century Impressionist painters who eschewed traditional studio techniques in favor of trying to capture what they saw outdoors. To this objection I respond with something I once heard a songwriter say: “How many songs are there about love?” 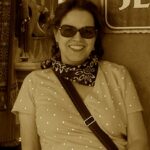 Ester Barkai is a freelance arts writer. She writes for The Magazine in Santa Fe, New Mexico and for Eugene Weekly in Eugene, Oregon. She started working for publications as a fashion illustrator in Los Angeles and then in New York. She has worked as a teacher teaching a variety of art history, drawing and cultural anthropology courses.