The decidedly small town gallery, bordering the edge of the Green Mountain National Forest along Vermont Route 100, is indeed a journey of local population centers: an hour from Dartmouth College, an hour and 10 minutes from Stowe, a hour and a half from Burlington. But the latest offering from owner and director Anni Mackay is, as usual, a compelling artist show that Vermonters likely won’t see elsewhere.

It is a ceramic show featuring three artists with very different practices, only one of which has a link with Vermont. “From East to West: a ceramic dialogue with Liz Quackenbush, Marc Pharis & Cappy thompsonmoves geographically across the United States East-based Quackenbush is a retired Penn State University art professor who spends part of her summers in Vermont. Pharis is a long-time member of the faculty at the University of Minnesota, and Thompson lives and works in Seattle.

Most of the ceramics on display are functional: teapots and cups, plates, butter dishes, vases, candle holders and candle holders. In addition to being useful, they are beautiful works of art. Or, as Mackay puts it, “ceramics of a certain caliber that I don’t consider to be craftsmanship, even though I know it is.”

Pharis’ geometrically oriented pieces are almost sculptural in their presence. A very large vase recalls the rust color and the slightly twisted curve of a sculpture by Richard Serra. The vase’s long, textured terracotta surface sports two or three crescent-shaped bands of glazed color – green, black – in a minimalist vein. Although the opening would only contain a few flowers, the entire interior is glazed. 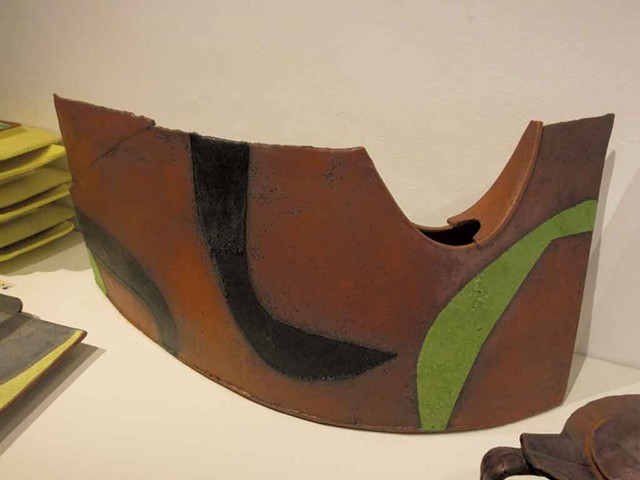 In several platters and plates, Pharis plays with form by disassembling expected forms and reconnecting them in unexpected ways. Four rectangular plates were sliced ​​lengthwise, their halves now joined together several millimeters apart. The artist painted them with geometric shapes that accentuate the slit on one side and obscure it on the other.

Color seems to be of particular interest to Pharis. This reddish-brown earthenware color becomes a perfect foil for its yellow, peach, mint green and other glazes, especially in its octagonal tea cups. However, he uses color sparingly: no room has more than three. Often one is black, as in some platters painted with boldly architectural shapes.

Quackenbush’s work couldn’t be more different. With white porcelain as a base, his works display meticulous attention to detail in sculpted textures and painted glaze decoration. Her French vase, an unusual shape imitating a tree stump beside a steep hill, is carved with a pattern of tiny suns, leaves, flowing water, and wood grain. Unlike Pharis’ vase, this one, with its three glass openings, would not intimidate the flowers it contains.

In an online artist statement, Quackenbush writes that she seeks to “develop my own ‘garden of earthly delights’ motif.” His work – here, 42 pieces arranged on two trays and a few plinths – achieves this with a profusion of references to nature. A butter dish is capped with the compact body of a frog; syrup pitchers look like cute little rodents; tiny tree stumps protrude from the sides of the vases; brightly painted hens sit on round dishes. Golden details burst from the hen blankets and the warm color of the egg yolk reveals itself like frosting inside a white teapot.

Quackenbush’s unusual piggy banks are eye-catching. Each is formed from three intricately carved porcelain spheres stacked on a pedestal, with slits cut into each sphere. The slots are large enough to insert coins and folded paper money, but too small for their retrieval. As if to emphasize the sculptural rather than the functional presence of these works, one side is topped by a glazed gallery with a circular peaked roof. 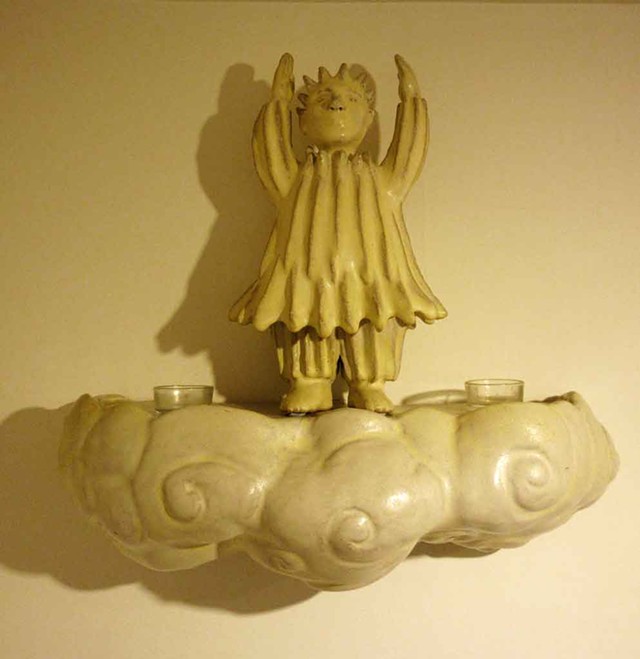 Thompson, an artist interested in folk forms across cultures, created a 36-piece wall installation in glazed terracotta in soft colors using yellow salt, white celadon, and blue. With its cloud-shaped shelves and star and sun-shaped elements, “Heavenscape” suggests a reimagining of a medieval depiction of paradise, though not so crowded with figures. Instead of having halos of gold leaf that reflect the light, Thompson’s angels stand next to tea lights; almost every room has a place for a candle.

Thompson’s figures – crowned angels, fawns, beehives, donkey – echo forms from South American, medieval West and Indian cultures. What ties them together, she wrote in a statement, is that “My expression centers on the human experience of kindness, hope and love.”

Gallery owners who make the trip to BigTown will most likely find all three when browsing the work of these experienced ceramic artists.