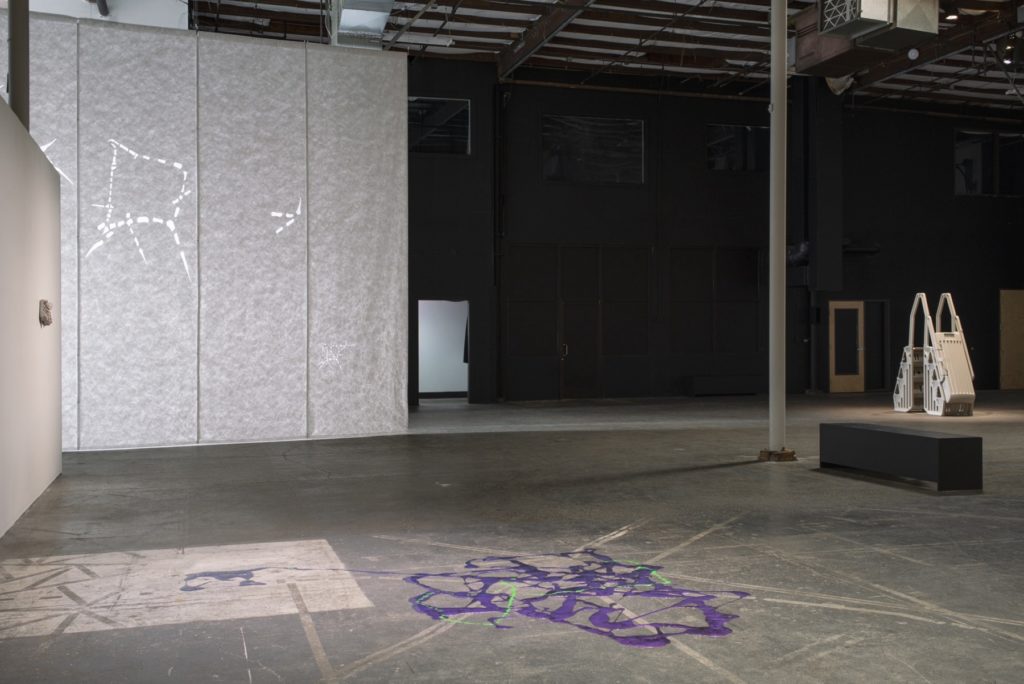 Otherwise for the grand entrance to the sidony o’neal exhibition “ENCHIRIDION: alley, spline, station” (“E: ASR”), I don’t know where to start this story. And even though I’ve decided to start with the physical threshold, a giant hallway, I do so knowing that all of O’Neal’s contributions resist linear summary in the best way: through intentionality and intuition. I follow their example, writing intuitively in an attempt to engage different entry points—among them poetics and acting—while disrupting my notions of what those entry points entail and where they might lead me.

On the threshold of Portland Institute of Contemporary Art, two giant polyethylene panels stretch between the floor and the ceiling, creating an aisle that I must cross to begin my journey. It takes up a lot of my time, as I get caught up in my visceral reactions to its material qualities. It is wrinkled and gouged with marks that resemble skeletal bones or the symbols of a tongue. This book, titled TANP D’ÆR/SPLINE + ELEGY, looks like a hallway but looks like an archaeological site but reads like a giant unbound book. I begin to detect a poetics of sculpture that breaks with representation. Comparisons abound as my frames of reference begin to falter.

Earlier today, before I got to that threshold, I met o’neal over coffee and asked them about the title “ENCHIRIDION”. They explained that the word refers to a kind of maintenance manual, with “aisle, spline, station” acting as its chapters or sections.

“I come to the visual art of poetry,” O’Neal added.

For them, “ENCHIRIDION” becomes a “poem to follow” rather than an instruction manual. And the synthetic language encourages this flight, eliciting vast word-based associations that disrupt my relationship to the materials and aesthetics at hand. I find myself constantly being redirected by the many possible meanings of o’neal’s titling and sculpting.

As I cross the aisle, I hear soft synth tones from a score created by Adee Roberson in collaboration with O’Neal. These tones seem transitory, like a kind of elevator music that cuts deeply, soothes and transports me at the same time. In an exhibition brochure I read that the whole of TANP D’ÆR/SPLINE + ELEGYsound score included, acts an elegy through two events: the Natchez Rhythm Club fire and France’s ecocide in the Caribbean. Both involved the use of insecticides that contributed to the harm and/or tragic death of black people.

The tender score and new historical context draw my attention to the presence of grief – that mysterious thing that slips through time and lineage – as I transit down the aisle.

A sculpture attracts my gaze in the distance, inviting me to move forward. I step out of the driveway and approach what turns out to be a swimming pool ladder (an object found by o’neal), adorned with figurines lined up like sentries. Each of these abstract figures is in weathered steel and different from the next. They sit in formation on pointed bronze pedestals aligned with the A-frame of the ladder.

I wonder if this pool ladder could be the entrance to the resort element? If so, then the characters preside over it with a militant air; the ladder itself is closed and inaccessible to many bodies. I feel like this conduit isn’t for everyone. The whole book, titled LESKALYÉ A LADISTANS KOSMIK, makes me think of other passages to spaces of respite and asylum that are never as quiet as they seem. Who and what do these spaces exclude? What forms of violence allow their semblance of peace?

As I walk around I also notice that the pool ladder is printed with a warning sign by its original manufacturer: “DANGER” I read in large print near an illustration of a character standing hitting his head as he dived into shallow water.

I look back to O’Neals’ steel characters with renewed appreciation for their role here. After all, sometimes it takes an illustration on a sign or a character in a storybook to address unfathomable or harrowing truths. These numbers obviously refer to the culture of the game, but they’re not just pawns on a chessboard – they read as alive and steeped in knowledge about the environment in which I move. I imagine them saying to me, “Okay, let’s go.”

And I do so, pressing “E:ASR” further toward a spot on the floor covered in a snaking spill of silicone. This goo shines opalescent blue, cut with a hint of neon lime. However, as I approach, its iridescence turns pink, then purple, then green. I continue to move, tracing this transfiguration of color with each step. After several rotations, I suspect the goo-titled SHMIN CLOSED ENDAN LISOGENI/POST QUANT SECURITY WILL NOT SAVE US-is in fact transform myselfrevealing and obscuring its nature as I change my position.

Maybe I’m dancing with a “spline” – a term with various practical applications. A quick internet search tells me that spline may refer to a tool for drawing smooth curves. and, in mathematics, spline refers to the interpolation of curvature. These two definitions speak of my encounter with this work, the arched pathways and the circular rotations it has aroused from my being. The word “spline” also evokes others, “spine, splice, split”, changing my relationship with it.

According to o’neal, the study of relationships and closeness permeates “E:ASR”. In the exhibit brochure, O’Neal highlights their offerings in reference to their Black and Afro-Indigenous/Creole descent. They cite “double and triple migration-marked diasporic experiences,” correlating this with mathematical analysis. They use terminology and language that forces me to look up words, follow search threads, and integrate what I learn. It puts me in touch with new information that shifts my relationships to what has been.

And, perhaps most urgently, O’Neal’s works touch my senses. If only I had the space here to write down my spectrum of reactions to every room, every environment – ​​the bracketed tables, the moss-covered asphalt playing field, the luxurious graphics decks. “E:ASR” contains worlds.

I watch. On the wall, I see a collection of soft gray objects, a work titled Den + Gut. It looks like both sides of an ergonomic gaming keyboard, made from modeling clay. The keys are beset with playful rubber flies, which seem to have some affinity with this item. Its roughly hewn edges remind me of a time in my childhood when I created paper or cardboard versions of technology I didn’t yet have access to. Freed from my current technical know-how, I imagined these magical and intuitive communication devices.

At this moment, grown up as I am, I find myself confronted with the limits of my current references and with all that I still don’t know. But “E: RSA” brings me back to my imagination. It requires me to have patience with myself as I synthesize meaning and trust that knowledge will follow – for, as O’Neal says, “Some of the most special ideas take time to arrive. “.

A closing event and book launch for sidony o’neals’ new publication, M:ASR, will take place August 14 from 12-2 p.m. with a reading by o’neal at 1 p.m.

2022-08-10
Previous Post: Kohle Capital Markets Continues CSR Initiatives with Artwork Donation to Lions Club International
Next Post: Art Review: “Whatever Gets You Through the Night” explored at the latest Mott-Warsh exhibition