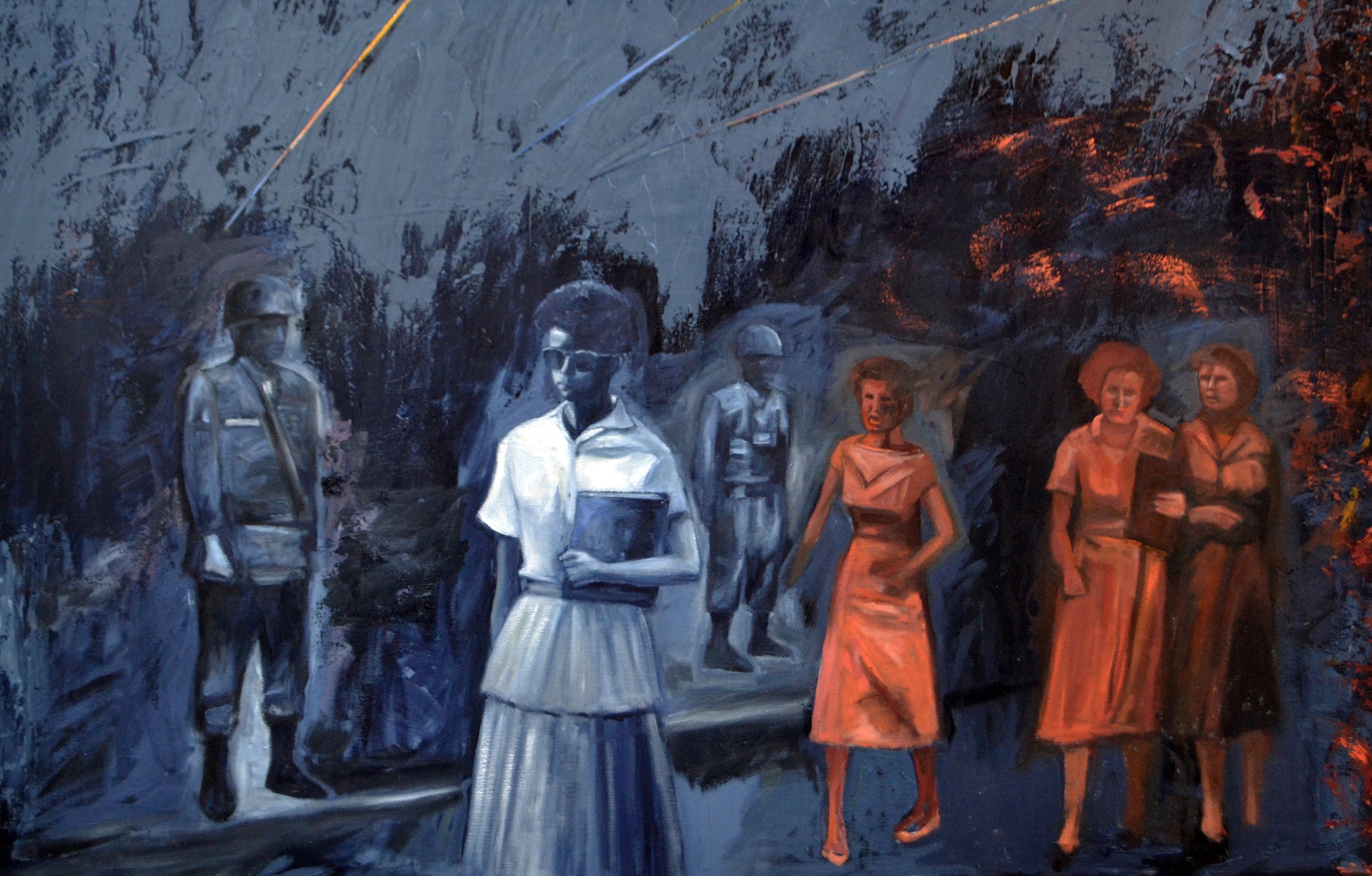 How has America changed since the disputed integration of the Little Rock schools in 1957? Not as much as we would like. We still grapple with the same injustices and inequalities, carrying the burden of that same ugly story, still rubbing the stains that will not fade. The photographs of the Little Rock Nine and the angry reactions of their persecutors unfortunately remain relevant to our national situation. Jersey City painter Peter Delman has grappled with American history in his canvases for years, and his own chilling reinterpretation of Little Rock’s most famous image, rendered by the artist in slate blue and red oils campfire, can now be found in the Art150 gallery at 150 rue de la Baie. It is one of more than one hundred pieces in “The Empowering: A Social Justice Exhibition” – an explicitly political exhibit that asks visitors to take a critical look at America as it is and ask where we might be. lead us.

In better times, this attractive new gallery would be a must stop for anyone interested in the current state of visual art in Jersey City. “The Empowering” includes many works by artists that have recently been exhibited in the city. If it is not entirely correct to call the participants in the art “Empowering” stars, many of them are, to say the least, notables of local art: Andrea McKenna, whose burlap and driftwood tapestries haunted the Eonta Space a year ago, contributes one of her bright portraits, the irrepressible superhero enthusiast Orlando Cuevas, borders a besieged Captain America in a gallery corner, and Theda Sandiford, whose incisive and bewildering work seems to be everywhere lately, invites us to contemplate the experience of stretching out on a sofa studded with hundreds of razor-cut zippers. Mollie Thonneson’s balanced and provocative arrangements of scraps of fabric and beads are here, as are Robert Kosinski’s shattered images of human faces, as are two street photos by Dorie Dahlberg, whose images of our powder nation have connotations. troubling wartime photojournalism.

In other words, “The Empowering” deserves to be occupied by visitors: it is a show on the state of the scene, a regional overview and a conversation about a country to which we have been forced to. think more than we’d probably like. Unfortunately, for reasons we all know too well, the salon and gallery are only open by appointment, via EventBrite, Saturday and Sunday afternoon. There is certainly something ironic about the inaccessibility of a show that demands more access, especially for marginalized people. But this is certainly not the fault of the artists, or of curator Danielle Scott, whose aesthetic orientation and sense of outrage are immediately palpable. This Jersey City (virtual) FridayScott will present “The Empowering” via Zoom at 8:00 p.m., walking through the exhibit and speaking with an interviewer. Video shows of art exhibitions are noticeably unrepresentative, but I bet it’s well worth a click.

Scott’s vision is saddened. It is also quite specific. “The Empowering” is full of portraits – some of historical figures, some contemporary politicians who regularly haunt our screens lately, and some of the recently killed, who have been unlucky enough to be on the professional side of the police. bullets. The aptly titled “The Problem We All Live With” by Miguel Cardenas makes room on a collage of stars and stripes for a defiant George Floyd, peering through bars in mute defiance, surrounded by white as in plain sight. of a sniper. Ben Jones’ big desktop wallpaper is filled with images of Trayvon Martin, some inverted, others scribbled, others simple and unmoved; he paired it up with an audio collage of gunshots and snippets of Marvin Gaye’s protesting soul.

Other portraits play like desescalations. The meticulously hand-stitched images of Julie Marie Seibert of Kamala Harris, Ilhan Omar and Deb Haaland, captured in intimate circles, soften the corners of public figures that are often presented to us in high contrast pixels and harsh backlighting. . Agnieszka Wszolokwska presents us with a faceless, but immediately recognizable Ruth Bader Ginsburg in acrylic, with soft shoulders, a thin and fragile neck, in front of a blackboard stuffed with text. Most of the most effective images are the simplest and saddest ones, which is appropriate for a political spectacle: Brad Terhune’s eight acrylic shadow heads, untitled and anonymous, leaning against a gallery wall, the battered boxer of Samon Onque, facing the barbed wire of the prison-industrial complex, the crouching human, exhausted, on two fingers, of Joséphine Barreiro, his head buried in his arms crossed, posing in front of a black and white American flag in the towards. “Divided We Stand”, this piece is called; in particular, the figure is not upright at all.

In a context so heavy with socio-political significance, even paintings that at first glance appear to be abstract expressionist works, like Mashell Black’s energetic canvases, begin to resemble figures in difficulty. Are they broad, dark brushstrokes on a yellow-yellow field, or are they human beings, stretched and pulled by the metamorphic pressures of recent years? I think these are people, but then again, like many other over-excited Americans, I started to see political significance everywhere I look: it’s a consequence of the news cycle and the boom. fast from a state of surveillance that makes me feel constantly on camera, watched by authorities, every keystroke recorded. My favorite work in this hard-hitting show isn’t a portrait at all – it’s an open wooden dresser, every drawer lit from the inside, every bed of socks filled with hundreds of pins topped with colorful fingerprints, and cut out. In a playful way, Valerie Huhn’s sculpture literalizes the notion of Bureau of Investigation. Specifically, it’s a metaphor for the invasion of our most private spaces by police logic, the law enforcement apparatus, and our own silent paranoia.

The Art150 gallery is run by the city’s most famous arts organization, which has often been forced by circumstances to act as an advocacy group for creative people. It should come as no surprise that Pro Arts’ first exhibition at Art150 was a political exhibition. Although Pro Arts has been around for over a quarter of a century, they have never had a dedicated public base of operations before. It is fitting that Pro Arts find a home at 150 Bay Street, as no building in the Warehouse District has better served the Powerhouse Arts District ordinance mandates. (Arguably 150 Bay is the only building in the district to have lived up to the spirit of the ordinance.) I suspect this gallery will ultimately serve as an anchor for the district that Pro Arts clearly intends to be, and that it will be as well attended as any arts venue in Hudson County. Not yet, alas. But soon.

2021-03-03
Previous Post: Review “Made You Look: A True Story of Fake Art”: the best counterfeit of all time?
Next Post: Chanel Azur by Roman Feral is the latest piece of contemporary art in Chanel’s Heritage collection