Sometimes the exhibitions are so radiant that you want to soak up them like the sun. “Director’s Choice”, currently at the BigTown Gallery in Rochester, is one of them. Curated by director Anni Mackay, this exuberant group exhibition showcases the work of seven artists, each with a clear voice and mature practice: Varujan Boghosian, Pat dipaula Klein, Helene matteson, Ira matteson, Nicolas santoro, Hugh Townley and John udvardy.

A range of mediums are represented, from the slightly wacky embroidery of the Klein dipula to the smooth stone worthy of Santoro. Mackay artfully blended the 60 or so works into a visual feast of texture, form and color. In a way, it’s not overwhelming.

Mackay said during a visit to the gallery that the seed of the exhibition was the works of Helen Matteson. A long-time artist, Matteson moved in 2004 to Thetford, where she lived and worked with her husband, Ira, until his death in 2011. She left over 400 completed sketchbooks and around 9,000 works on paper. , all unsigned, undated and untitled.

As a Matteson gallery owner, Mackay has endeavored to archive this unruly corpus. She doesn’t seem to care, however, and expresses her respect for the artists who “[work] to be content to make their art, whatever the result of the sales “and to put their energy in” the language which they develop “. 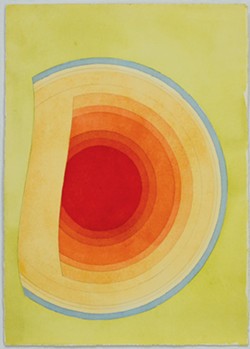 For “Director’s Choice,” Mackay selected 18 untitled Matteson drawings and watercolors. Often colorful geometric studies, they are minimalist but rarely austere, due to the infinite possibilities of gradation in watercolor. Concentric circles resemble the cross section of a jawbreaker, although Matteson frequently interrupted the geometric perfection by cutting the side of a circle with a different line, color, or both – a suggestion from alternative perfect shapes. Some of the works, especially those with Matteson’s thick, slightly twisted lines, are reminiscent of the work of Corita Kent, an artist / activist known for the colorful prints she made in the 1960s and 1970s.

Works by Helen Matteson are on display alongside those of Ira, who turns 99 this year. Although classically trained as a bronze sculptor, he turned to woodworking when he moved to Vermont. A large selection of Ira’s works can be found at BigTown: abstract, freestanding wood sculpture; Large-scale “wood grain rubs”; and nude figures, both in bronze and in wood panel.

Looking at “Horizontal 8” or “Michigan Avenue” one can easily identify common symbols – star, hand, heart, arrow – as well as figurative and natural forms. A more abstract and untitled work by Townley is painted in bright hues worthy of a play school, appearing to celebrate the sheer joy of form and color. 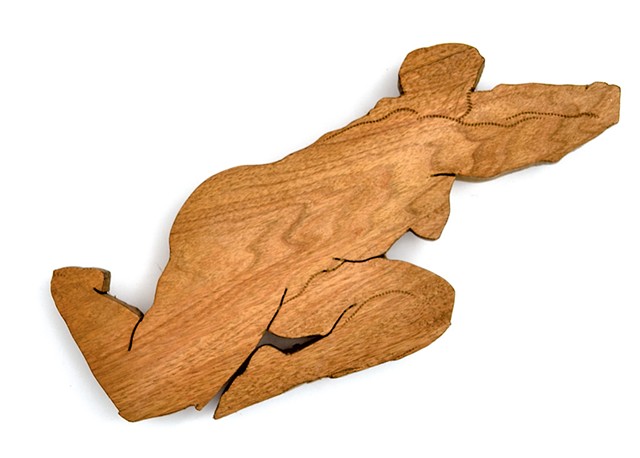 Udvardy’s sculptures show a similar interest in basic shapes and bold colors, but, where Townley favored clean lines, precision and solid materials, Rhode Island-based Udvardy opts for precariousness. “Table Setting” and “Wings of Icarus” both seem to be suspended in motion and about to tip over. The “Lunar Ivory” and “Forge” murals are made of painted cardboard, using the lowest common denominator – both in material and shape – to suggest the titular elements.

Contrary to this irreverence, Santoro’s stone sculpture is solid and unwavering, as if it had emerged whole from the ground. This description is particularly suitable for “Origins Triptych”, which consists of three freestanding pieces. Each features tuber-like shapes that intertwine smoothly and rise skyward.

The works of Boghosian and Dipaula Klein are much more valuable in scale. The latter’s embroidered pieces feature a menagerie of invented creatures that seem to dance flora / fauna hybrids. With titles such as “Rumpus of Shapes”, “Genitalia Sampler”, “Garden Notes” and “Phantasmagoria”, dipaula Klein’s creations resemble artful illustrations of science fiction petri dishes. It deliciously blurs the boundaries between human and plant biology.

Mackay has selected Boghosian collages that also take the natural realm as the subject. Vintage images of swans and roses populate the intricate handyman scenes, providing a sort of nostalgic and ephemeral counterbalance to dipaula Klein’s imaginative and perhaps futuristic creatures.

Mackay has succeeded in harmonizing the works of strong artists individually for a group exhibition that stands out for both its formal sophistication and its playfulness. It can make you want to get your hands dirty creating your own art – which some say is the hallmark of a great show.