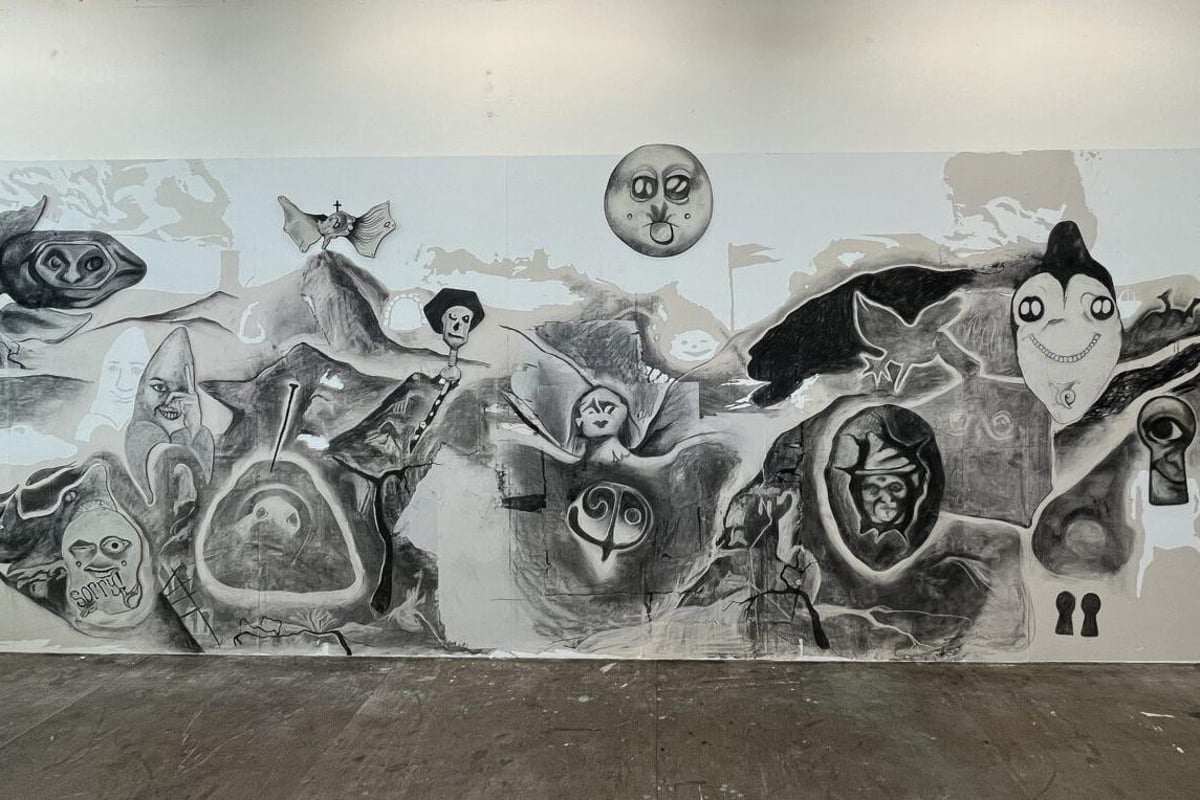 By: Marlene W. Glover
In: Art review
Detail from Can You See My Disguise Part II by Ruby Kuye-Kline

With the loss of its glorious Mackintosh building, the Glasgow School of Art, architecturally speaking, has come a long way down. In Look Back in Anger, Jimmy Porter bitterly recalls that the college he briefly attended was “not even red brick, but white tile.” The part of the GSA that was in the Mack is now housed in the Stow College building, a former FE college, and its interior is indeed white tiled. Never mind the loss of architectural glory, though, as I’ve been assured it works just fine. No one would say, but maybe even better than the quirky old school house. Admittedly, its plan is simple, and the graduation show, spread out in small studios over five floors and a bit, is easy to see.

From the students’ point of view, however, getting it all right hasn’t been easy. This graduate generation has been hard hit by confinement. It took most of two years out of the four years of their course. They were working as best they could for some of that time, on the kitchen table, or wherever they could find space, so it’s remarkable that they managed to put on such a lively show .

Given that they worked separately most of the time, it’s also intriguing that there seems to be a lot of crossover. This is particularly striking in the range of craftsmanship deployed, but also in the interest in materials. It’s as if the students wanted to move away from the cerebral and the conceptual to something more tangible. One skill that kept coming up, for example, was weaving, sewing, or at least the processing of wool, yarn, and cloth. A striking example is an exquisite set of embroidered objects made by Nuala Abramson. She embroidered what looks like a Renaissance doublet in scarlet and gold, but actually appears to be a golden ribcage with a negative bird sticking out of it. She also made a beautiful embroidery miniature of a woman under a multicolored dome. Meadhbh Corrigan made patchwork quilts while Matilda Glancy sewed a stunning installation with a patchwork image of the sun and underneath laid out fabric with what appears to be some sort of zodiac in embroidery and appliqué. There is also a charming book of rags.

Enterprising Kitty Glover teamed up with a knitting bee called the Clack and Yak band to produce a phantasmagoria of knitted animals, snakes and dinosaurs all falling to the ground. Lily Garget is interested in fabric dyeing and has created beautiful dyes from natural materials like red cabbage, lichen and onion skins. There are poetic instructions for making them and pretty fabrics printed with the shadow of a mushroom. Sophie Minervini has doubled her craftsmanship to combine a beautifully embroidered fabric with beautifully crafted enamelled ceramic pots. Amber Jones’ meticulously put together show is themed around seeds and includes some very beautiful ceramics. Among other things, Rosa Gally has also made ceramic pots that look deliberately wonky. Another item is an elegant welded mild steel watering can. The point is in the title of the show: Failing to Serve. I could be wrong, but that seems like a rather charming anti-Duchamp statement: you can’t just translate an object from ordinary reality into “art reality” by putting it in a gallery. It has its own existence.

Emily Wood uses natural materials to represent a “material ecology in the Symbiocene”. In the center is a solid-looking piece of furniture made largely from dried mushrooms and lichens. She also uses wood and it is another natural material very present here. Its use seems to be a reflection on sustainability and our relationship to the environment, a recurring theme in the show. Sasha Ballon, for example, is apparently a skilled arborist and therefore uses trees and tree pieces to make sculpture. Gus Rushin displays the natural beauty of wood and wood grain in sculptures made from a single piece of wood cut into thin layers. He also transformed cross-sections of trees into striking prints. A piece of carpentry by Amy Strzoda is at first glance more conventional. This is a beautifully crafted wooden two-seater chair, but it also spins for added excitement.

Facing nature, there is also earth, fire and water. Joseph Weisberg has a real pile of dirt to illustrate the theme of his dirt pile photos. Lily Krempel has made an ingenious, large-scale version of the spinning candle chimes on the Christmas table. It requires a full bonfire to operate, but luckily there is no fire, only token burnt sticks underneath. Water is represented by Laurie Carter with a bucket with a hole hanging over a bowl. Each time a drop falls, it produces an amplified sound as the disturbance patterns on the surface of the water are projected above. Josie Swift made a sofa out of concrete and seems to have managed to match her texture in makeup. And then there is the waste. Ciaran Cannon recycles rusted metal into sculptural forms while Alfie Keenan restores dignity to waste in beautiful plaster reliefs

The object lives, by Alfie Keenan

There is of course also paint, and some of them are very good. Mia Kokkoni paints small magical landscapes with figures reminiscent of both Chagall and Van Gogh. Rebecca McCormack-Haigh’s work is more austere, an entire installation made of striking black and white Op Art images. There is also quite a nice “op” transparency. Scott Jaffrey makes pastels, some abstract, others transformed into marine pieces by the addition of a sailboat. He seems to have worked by grinding the pastels to dust and then letting gravity run them across the paper. The results are very beautiful.

Rowan Bazley mixes free abstraction with enigmatic inscriptions in flowing paint – “Take the last train home”, for example, or “No Chemistry, no Future” – but also paints lovely simple abstract images. Such allusions to personal finding resonate elsewhere as well. Kathleen Lodge made a touching display of things like mugs and other pragmatic objects printed with inscriptions like “Call my mom” or “Have a cup of tea”, as well as beer bottles labeled “Pray to a higher power or “Get My Nails Done” – the texture of life, really. There’s a lot more of interest, of course, but as a coda to the whole thing, there’s a huge, wonderfully wild charcoal drawing by Ruby Kuye-Kline on the fourth floor.