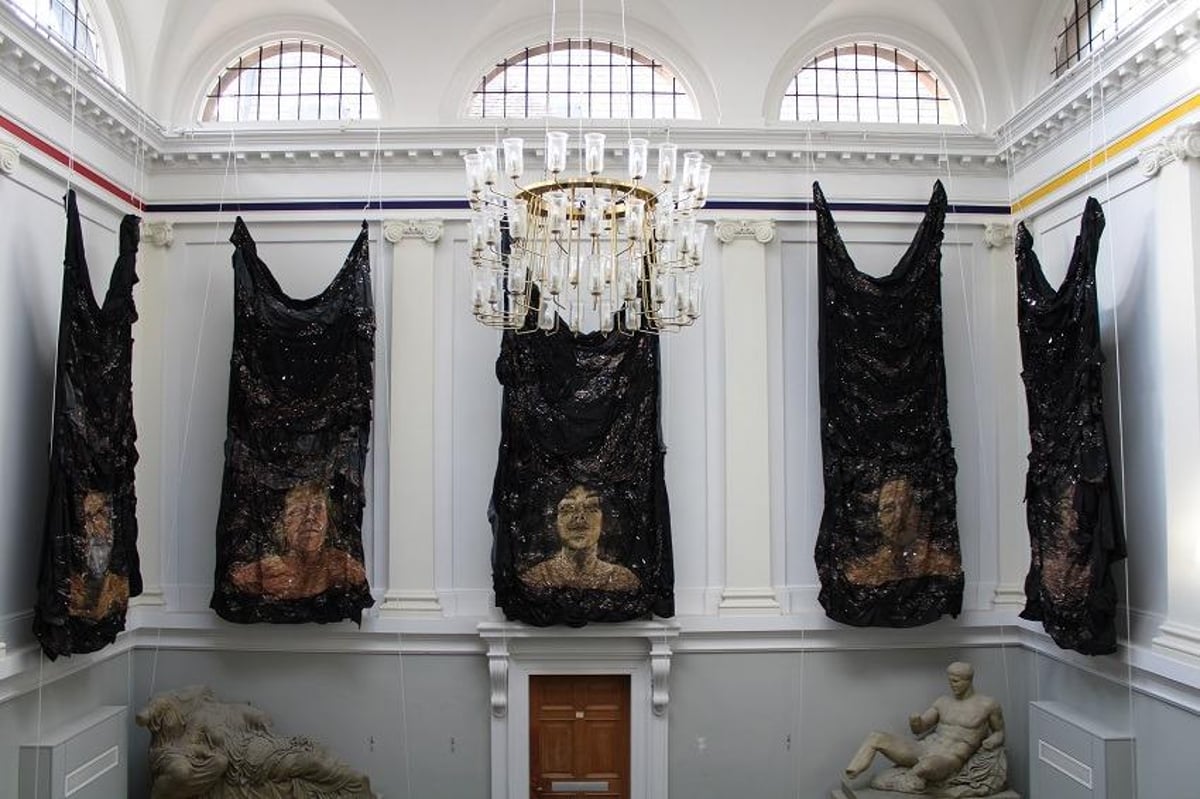 The pandemic and its lockdowns have been difficult for everyone and tragic for too many. Nevertheless, one must have compassion for the students who have seen their education so severely disrupted at a critical time in their lives. Art students were particularly disadvantaged. When much of what they do is likely to be physical, Zoom doesn’t really help. One advantage they usually have over others is space – studios to work in – so it was a lot harder for them when the art schools were closed and they had to find places to work there where they could.

At Edinburgh College of Art the main focus of the annual degree exhibition is assessment, but this year things remained so uncertain that it had to be done differently, and so the current exhibition is a optional supplement. Not that they skimped on it. There is a lot to see. I also notice that, like in the Glasgow degree show, in Edinburgh there is a tendency to do things. Forced to be more cerebral by circumstances, perhaps in reaction the students turned to the practical and the physical as soon as they returned to their studios.

You can’t really do more physical work than working with metal, and there are quite a few students, not necessarily sculptors either, who have done exactly that. Millie Player, for example, achieved what really must be called wrought-iron designs, subtle, linear shapes, elegant knots and webs, all highly unlikely in such a material. She also threw in a piece of crocheted yarn as a kind of reference maybe. Maya Mackenzie works in cut steel and made a tall tower and then hung a steel chandelier from it. She hasn’t softened the edges either, and the results here and in her other works, like a glass table on a cut steel base, for example, look uncomfortably sharp.

Tim Milner used bits of old plumbing or old machinery to make a tank, but his military ferocity is softened by an illuminated pool of water in the middle. Its abstract figure in welded recycled steel echoes some of Paolozzi’s early pieces, and is none the worse for it. Hannah Grist has made imposing sculptures from recycled central heating radiators. She also created a delightfully humorous image by mounting an old bathtub on bicycle wheels. Fernanda Zei also uses steel but in a softer way. She projected a dancing figure, in negative, light against dark, onto a large disc of rusty steel. The effect is rather poetic. Deliberately contrasting materials, perhaps, his projector is housed in a box made of undressed wooden planks.

Others use wood in a fairly similar way. Lucy Mulholland, for example, made a wooden cat ladder that coils up and out of the high studio window, seemingly into empty space. However, one of the most charming objects in the whole show is his wooden musical wheelbarrow. Push it and it plays a melody according to the music box principle. Matilda Bird made equally original plywood chairs. They are double sided so you can fold them up and sit either way. There may be an invisible catch though. The hinge of one of them consists of a row of dobbies.

Wool is another natural material that makes an occasional appearance. This is her raw state in the work of Angharad Franziksa: she has draped a mass of wool over a frame. It’s stripped straight from the sheep, but with the light streaming through it, it’s quite handsome. Esme Binks also uses yarn but crocheted in hanging shapes. However, she then places this next to loosely painted abstract images to create an intriguing visual analogy.

Others also produced non-figurative paintings. Imogen Luczyc-Wyhowska paints large, impressive abstract expressionist canvases, while Rose Hinton has large, flat, freestanding paintings in pure, unmodulated colors. They are truly beautiful, but apparently derive from an abstruse analysis of atomic structure. Most of the painting is more or less figurative, however. Mhairi Maxwell recorded all the plant species she identified along Water of Leith. It may be an interesting project on its own, but she then turned some of her findings into four large, brightly colored paintings.

Isabella Inskip documented nature in a different way. She collected flowers and plants and then reproduced them using a 3D printer. The results are surprisingly beautiful. Mhairi Maxwell’s trip down the river has a different echo in Lucas Priest’s school of pedestrian culture. He literally uses the word pedestrian. His school consists of a series of organized walks, all documented here.

Among the painters, Olivia-Anna Boden has lined a wall with wonderfully inventive little paintings and cut-outs that seem to constitute a poetic reflection on the iconography of a young girl’s fictions and fantasies. It sounds cheerful enough, but the soul-searching in some other student’s work seems to be in a much darker mood. This is perhaps not surprising given recent history. The normal college years and the teen-to-adult transition they cover aren’t always easy, but the shadow of the pandemic seems to hang over some of the work here.

There is a confessional note, even that of anguish is part of it. Large graffiti-style images of Phoebe Logan, for example, have words like “vomit” or “chaos” written among violent images. Amelia Morgan has painted a series of pictures which appear to represent death in the countryside with among them a naked bird-headed female figure holding dead pheasants and real bones hanging beside them for good measure Although they are beautifully done , there’s implied sexual violence in Shawn Nayar’s series of cutouts, which takes advantage of the studio’s tall windows and their castle views to feature “castle views” with an emphasis on “donkey “.

Shadow of the Moon by Rose Hinton

Using a mix of sculpture and projection, Fred Connor’s Girl eating a flower is a pretty nice silhouette of a woman and a flower, all in a purple light and altogether more befitting. As you enter the exhibit, however, a somber mood is created by the large paintings of Amelia Clark’s faces against a black background, draped loosely across the stairwell. It sets the stage for a diverse and interesting show.