The color blue has proven visually appealing at least since the Chinese began making blue-on-white patterned ceramics during the Tang Dynasty (618-907) using cobalt ores from Persia. “Deep Blue”, the main exhibition of the Hall Art Foundation this year, testifies to the continued fascination of color for artists, in particular the painter Katherine Bradford, who curated the exhibition.

Bradford chose the more than 70 works in the exhibition from a veritable treasure trove. The Hall Art Foundation, despite its location in the small village of Reading, houses what is surely the largest and deepest collection of post-war and contemporary art in the state.

British-born collectors Andrew and Christine Hall established the foundation in 2007 to present their collection of over 5,000 works of art to the public. The foundation’s site in Vermont opened as an exhibition space in 2012. It hosts artist-curated exhibitions from May through November on five beautifully rehabilitated dairy farms spread along a scenic creek. (The Halls also own a castle in Derneburg, Germany, and rent an industrial shed in Mass MoCA in North Adams, Mass., to show their collection.)

A 79-year-old artist who divides her time between New York and Maine, Bradford is a self-taught painter who later taught at the Yale School of Art, among other institutions, and won a Joan Mitchell Foundation award in 2012. Her paintings with dense colors often explore surfers, swimmers and other figures in the water. 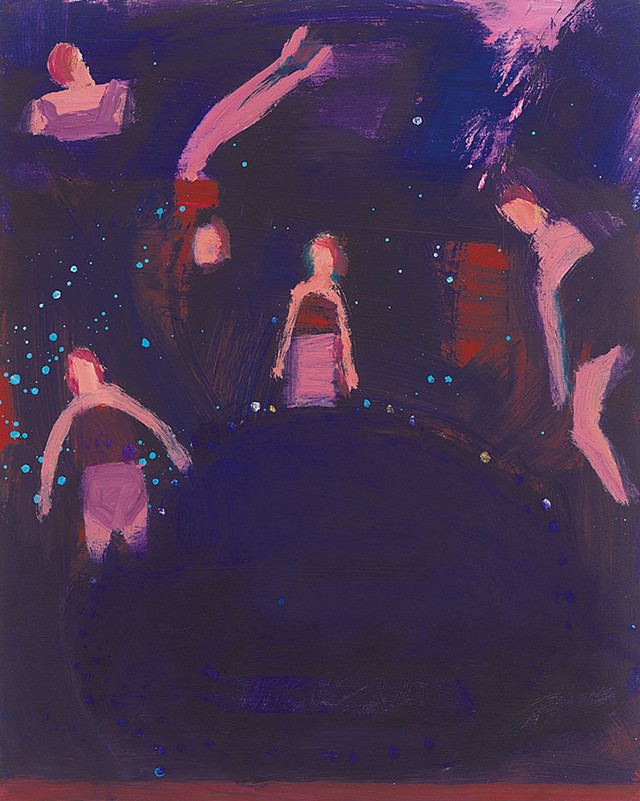 “Holiday After Dark” (2018), a Henri Matisse-like composition of crudely rendered figures who appear to be diving or walking on water, depicts them in an ambiguous dark blue, dot-speckled depth that could also be stellar: a view in deep space.

Browsing through the foundation’s and the Halls’ personal collections, Bradford found works that reflect his fascination with blue and depth. Due to the pandemic, she performed this task virtually. She also “installed” the exhibition remotely with the help of Maryse Brand, the Halls’ daughter-in-law, who created a SketchUp of the galleries for this purpose.

Brand leads the foundation and opened the buildings to this reporter for a self-guided tour. New this year is the lack of docents; visitors go from gallery to gallery on their own. 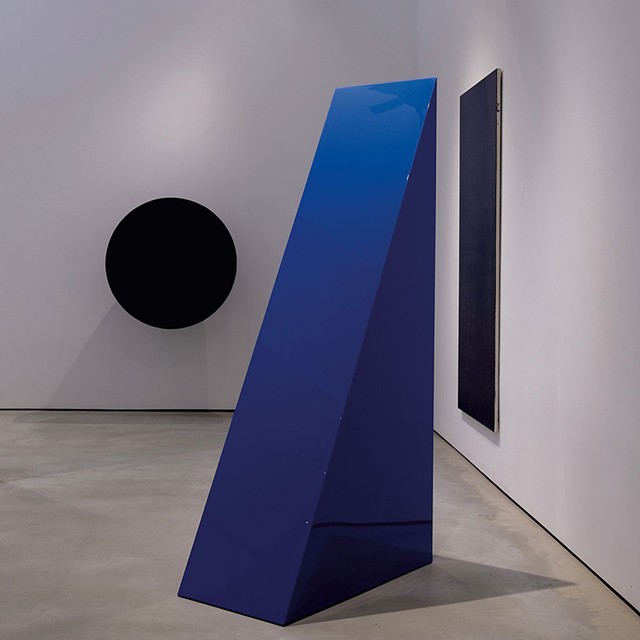 Three sculptural works in a corner of the stable form a geometric trio. The largest is “Untitled (Blue Wedge)” (1968) by John McCracken, a 96 x 48 inch fiberglass-on-wood right-angled triangle. The artist painstakingly applied his flawless Caribbean blue lacquer and polyester resin finish by hand.

On the wall hangs “Untitled” (1993-2014) by Olivier Mosset, a vertically aligned rectangular canvas whose color – a depthless midnight blue in polyurethane and acrylic – somehow defies the flatness of its form. From the adjacent wall protrudes Anis Kapoor“Untitled” (1992), a sliced ​​sphere – resembling a giant Amazon Echo Spot – in a deep purple blue. Its flat surface facing the viewer is impenetrable.

“What do we see when we look into a vast blue void? Bradford asks in an audio clip commentary on the three works. (Visitors can access all of the labels and the curator’s one-off comments via a QR code displayed in each gallery.) “Do these objects turn into an air sensation?” She keeps. If she leaves these questions unanswered, the blue of the three sculptures is a confrontation with existence and its meaning that eliminates reassuring landmarks.

Most Bradford artists chose to use blue simply because they liked or liked the color. Yves Klein invented his own purplish blue, which he patented as International Klein Blue in 1960. One of his “Blue Venus” sculptures, a plaster copy of a color-saturated Louvre torso, is found in the pole barn.

In a beautiful pairing of works on paper in the farmhouse, Joan Mitchell‘s “Untitled, Diptych” (date unknown) and Richard Diebenkorn“Untitled” (1981) hang side by side. Both American artists fell in love with the blues of their surroundings – Mitchell with the wild blues of France, where she lived much of her life; Diebenkorn with the clear blues of the California sky and ocean. Mitchell’s uninhibited, profusely applied scribbles of blue pastel crayon, which densely fill the paper, exude a cheerful energy.

“These two are masters of blue,” Bradford comments in an audio clip, “and if there was a Matisse next to them, you’d have the whole pantheon of artists who… loved the color blue. ”

More complicated in their use of tint, four monumental paintings face each other in the center of the stable. Their manufacturers are all German, including three born in the former East Germany. The halls have extensive collections of post-war German art, not just the large-scale Anselm Kiefers that fill the MASS MoCA hangar. They acquire a copy of every multiple created by Joseph Beuys and own many works by Georg Baselitz – not to mention Derneburg Castle where Baselitz lived and painted for 30 years.

Among the four central paintings, “Aquageddon” (2007), by the student of Baselitz Norbert Bisky, is the most nightmarish. The painting is overwhelming not only in its size (110 by 157 inches) but in the realism of its apocalyptic scene.

The work depicts young men with idealized bodies – a potent symbol of communist East Germany, where Bisky grew up – variously annoyed by a telephone pole, crucified, having desperate sex, or kicking their ass off. a sinking house. The blues in the painting transform from the night sky to the black hole to the towering tsunami and almost gelatinous floodwaters; blue facilitates scene instability and destruction.

“Hero No. 1” (2011) by Daniel Richter references the Baselitz hero paintings of 1965-66, as well as the wars in Afghanistan and Iraq. In it, a skull-and-crossbones soldier runs towards the viewer, his figure formed entirely of what looks like energized, orange, pulsating wires. Curiously, the mountain range behind the figure is suggested with the same threadlike outlines but in a cool blue, as if the surroundings were unaffected by the war.

The third painting, “Neue Mehrheit” (“New Majority”) by Jörg Immendorff (1983), features a menacing group of eagles – symbolizing West Germany – joined by a swastika. Immendorff studied with Beuys; the two shared an interest in the sociopolitical power of art.

AR Penck, a friend of Immendorff and fellow East German, painted the fourth work, “Kooperation” à la Keith Haring (2002). The two black stick figures in the painting, arms raised, could just as easily be about to attack each other as they are cooperating; the neutral light blue background offers no clues.

The risk of remote conservation is evident in the pole barn, where Bradford’s audio clip describes the “beautifully blue” hue in Chris Martin’s “Samuel Palmer” (2007). The virtual image of the board is dark blue, but in reality the board is gray. Next to it, the flat periwinkle from Andy Warhol’s “Flowers” (1978) matches its digital image well.

Far from focusing on the big names, Andrew Hall continues to seek out little-known artists he deems undervalued — mostly finding them on Instagram these days, according to Brand. Then he collects them in depth, a clever investment strategy that must also be a lot of fun.

Hall’s finds include the East Burke Painter Terry Ekasala. One of his works first appeared in the Hall’s “Made in Vermont” exhibit in 2018; now she has a personal exhibit at the visitor center.

Much has been written about the Halls’ source of funding: Andrew is an oil commodities trader whose promised bonus of $100 million in 2009 from a taxpayer-bailed Citigroup company sparked public outrage. Still, it’s commendable that the couple decided to share their art collection with the public — not a given at their level. And their decision to locate the foundation near their home in Reading, rather than their homes in Palm Beach or New York, is a plus for Vermont.