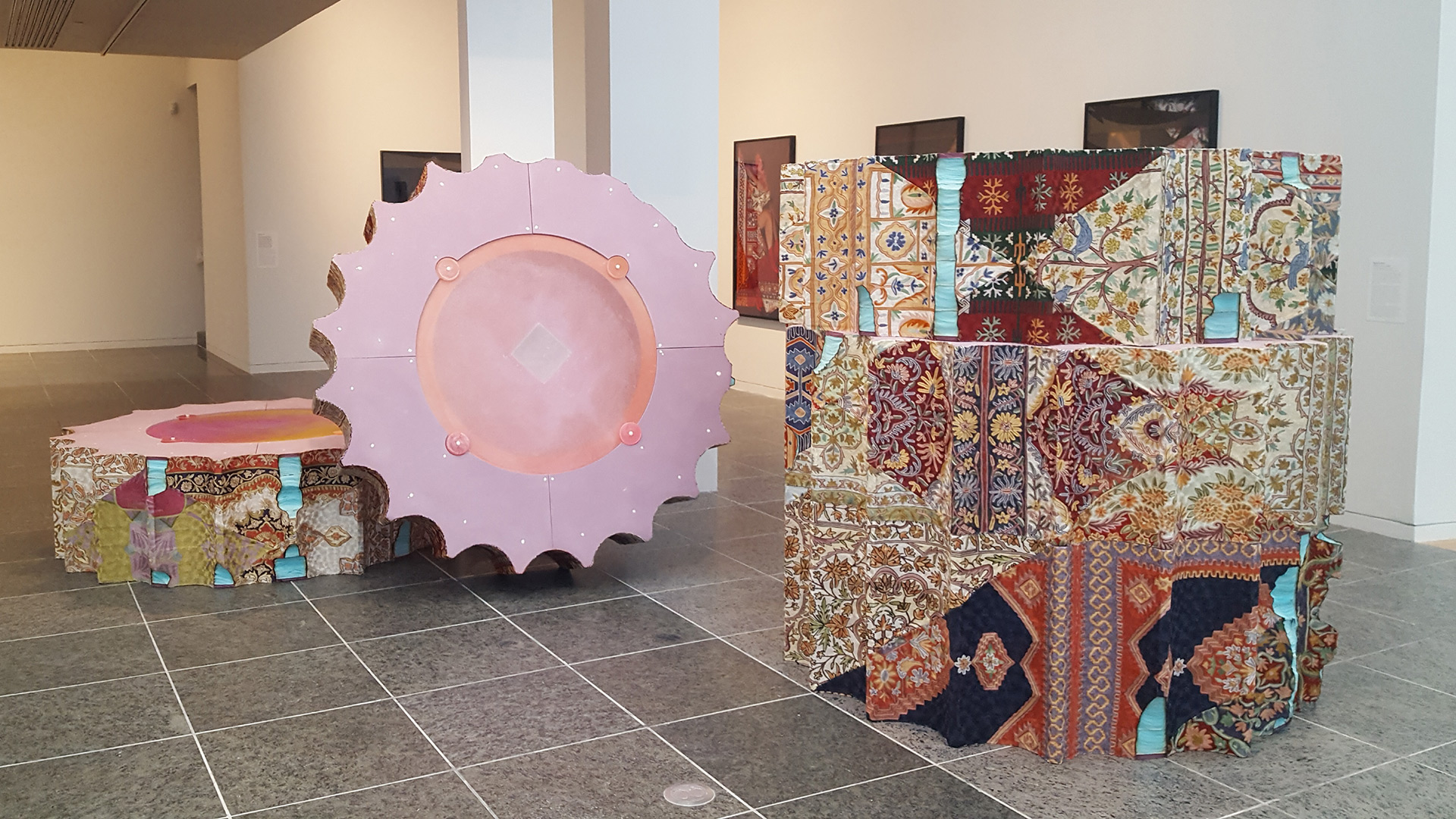 It’s fair to say that the current exhibition at the Wexner Center for the Arts is more about exploration than exhibition; more inclined to discovery than to teaching. Given that Associate Curator Lucy Zimmerman based the entire exhibit on a series of probing questions, that’s not entirely surprising. Determining the purpose of museums, understanding who museums serve, and acknowledging the role artists play in both our communities and our culture are central to Zimmerman’s questions. These are questions that rightly demand examination.

We live in a time when cultural institutions in particular need to define their role to both reflect and shape the world in which we live. Recognition of this, together with recognition of the social responsibilities of museums, is the springboard from which Climate change jumps. The exhibition opens outside the galleries themselves with work by Chris Burden from 1990, Wexner Castle. Originally commissioned as part of the exhibition New works for new spaces: in the 90s, Burden’s ad hoc ramparts offer an examination of architecture as a form of cultural history while ironically acknowledging the museum’s traditional role as a cultural fortress; protective, imposing, inflexible and impenetrable.

Inside, these walls are collapsing.

Climate change offers a range of perspectives touching on all kinds of societal constructs, from racism and income inequality to disability justice and colonialism. It is an exhibition that examines our shared social environments and asks us to look beyond our accepted systems. It eschews what is prescribed for what is possible and offers a way to imagine new paths forward. To this end, Climate change invites the kind of exploration, reflection and dialogue that supports creative problem solving. It has been said that the two most critical conditions for creativity are exposure to a wide range of ideas and time to think about and make connections between those ideas. From this point of view, Climate change is something of a masterclass, presenting a dizzying array of concepts with ample room to ponder. Multidisciplinary in its approach, Climate change rewards viewers who give it the time and attention it deserves.

In Baseera Khan’s strike Column series, the artist draws attention to this ubiquitous emblem of Western power, the fluted Corinthian column. An architectural staple of financial institutions, government buildings, and college campuses, these columns are synonymous with power and authority. In Khan’s hands, this power quickly evaporates. Hollowed out, constructed of lightweight foam, and wrapped in patterned prayer rugs, the authority of these columns becomes far less inherent. Like Burden Wexner Castlepower is illusory, holding exactly as much hold and meaning as we are inclined to give it.

Pope.L’s A ship within a ship within a ship and so on presents an examination of an equally powerful cultural icon; in this case, Dr. Martin Luther King Jr. Attaching a bust of the late civil rights leader to the body of a curvaceous female pirate, Pope.L illustrates exactly how we can remove people and their ideas from context of origin. While there is something absurd about Pope.L’s portrayal of Dr. King, it is perhaps no more absurd than those who would invoke King’s words and legacy while actively subverting ideals. that he defended.

by Carolyn Lazard pain scale consists of six identical smiley face decals spaced evenly across a gallery wall. The images are similar to those stylized renderings used by medical professionals to assess a patient’s level of pain. By presenting each face as smiling and rendering each as a person of color, Lazard removes patient agency and highlights discrepancies in how pain is treated and how care is delivered to African Americans.

The main gallery space contains the work of Torkwase Dyson, recipient of the 2020 Wexner Center Artist Residency Award. Dyson uses sculptural and geometric abstraction infused with a sense of cultural history to represent space, history and our relationship with both.

In his sculpture Deep black (bird and lava) each piece denotes the story of a particular slave’s journey to freedom. Originally presented as individual sculptures distributed in space, these pieces were assembled halfway through the exhibition to create a single imposing sculpture. It’s a powerful piece that highlights how understated stories and bits of history can come together to create something powerfully cohesive.

This drive to challenge our social environments and challenge established practices is perhaps best encapsulated in the charcoal mural created by artist collective Futurefarmers. The work suggests that we don’t need museums to preserve varieties, but rather to cultivate them. It is one of the central principles of Climate change; the idea that a museum should not simply present ideas, but should incubate, nurture and disseminate them.

The pandemic has forced individuals and institutions to reassess what is important; to redefine what they do, how they do it, and perhaps most importantly, ask themselves why they do what they do. It would indeed be a missed opportunity if we as individuals, institutions and as a society emerge from this pandemic in the same way as when we entered it. Our social climates should cash. We should change. The events of the last twelve months have highlighted this need. Climate change: on artists, institutions and social environments shows us how we could.

Climate change: on artists, institutions and the social environment is on view at the Wexner Center for the Arts through August 15 (the show has been extended since its original May 9 closure). More information is available here.

All photos by Jeff Regensburger unless otherwise noted

2021-04-07
Previous Post: Closure of the National Art Shop
Next Post: Art review: Patt Franklin’s nature paintings blur the line between the real and the abstract