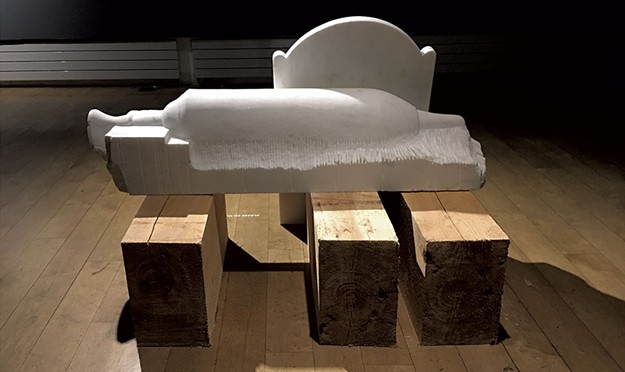 Bradley Borthwickthe exhibition of “Empire Items“conveys more than it first appears. In the gallery on the second floor of Burlington’s BCA Center, warm spotlights focus on two rather austere installations. The lighting is otherwise dim, giving the small room a feeling of privacy in a secret room.

To the left, an amphora nearly four feet long emerges half-carved from a 600-pound block of Vermont Olympic white marble, as if adorning a sarcophagus. It sits on three thick beams of Atlantic white cedar, each 24 inches long. A narrow marble tablet, or gravestone, rests against the amphora.

Fifteen replicas of the tablet, cast in beeswax, lean against an opposite wall. Five of them are raised above the others on cedar blocks. The tablets are 20.5 inches wide, 31 inches high and 1.5 inches thick. Their elegantly carved inscription is in memory of a Mr. John Pratt, buried in 1768 in Old Bennington Cemetery, where Borthwick first spotted the gravestone.

An accompanying soundscape features a relentless industrial clatter paired with a melancholy piano melody. Little by little, the composition gains in intensity, then fades and is built up again and again. The sound is hypnotic, attractive and repulsive at the same time.

As Borthwick explained in a phone call, he recorded the hydraulic hammer at a metal shop near his home in Maine. He then sent the file to his brother-in-law, SJ Kardash, musician and producer in Saskatchewan. Kardash composed and played the piano part and synchronized it to the sweltering beat of the machine.

While the audio component of “Objects of Empire” creates ambience, the visuals present an alluring figure. Items can be relics, or omens, or maybe both. Their placement is clearly intentional but recalls the rough order of a salvage warehouse. Visitors may wonder, What is happening here?

According to the guide, written by Heather Ferrell, curator and director of exhibitions at the BCA, “Borthwick carefully reflects on the shared cycles of civilization by investigating two seemingly incongruous artifacts – an 18th-century Vermont gravestone known as the Pratt’s tablet and an ancient, Roman-period amphora … [He] presents each form as a powerful signifier of memory, place and cultural connection. ” 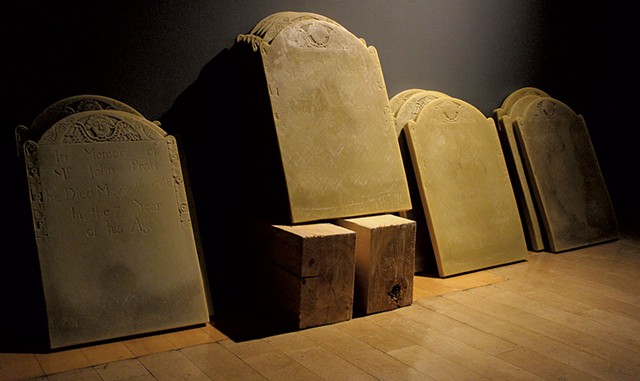 The Ontario-born artist, now associate professor of art at Colby College, is indeed drawn to the study of history, both cultural and industrial. The amphora and the tablet are “markers of a time and a place,” he said. These are vestiges of both ascension and decline.

Borthwick suggests that objects are more than just physical rubbish; they can hold the collective memory. “There is a resonance I feel when I carve stone,” he said. “I can’t explain it, but I know it’s there.”

Found at sites around Europe and the Mediterranean region, caches of amphorae bear witness to the vast expanses of the Roman Empire. The Pratt Tablet – “one of the first marble works from Vermont to be placed in a cemetery,” Ferrell observes – denotes a different kind of empire: the flourishing quarries and stonecutting industries of New England .

The juxtaposition of Borthwick elements here is fascinating – and more than a little mind-blowing. The exhibition is not didactic, but it offers tantalizing mental burrows. A consideration of time that spans millennia is one of them: the amphora exists in this distant past that we call “antiquity”. The gravestone is simply old – from an accessible past that is evident in Vermont cemeteries. What connects these periods with each other is a primitive unfathomable stone, mined from the earth and used by man in life and death through the ages.

2021 is a comfortable distance from the rise and fall of ancient Rome, less of the decline of a once robust economy in Vermont. Which is decidedly UNcomfortable to contemplate is the current period of degradation – of climate, of natural resources, of civility, of democracy. As Borthwick writes in his statement for a previous exhibit, titled simply “Amphorae”: “[W]What could these symbols of the Empire allow us to recognize in our current positioning along the cycle of civilizations? ”

Borthwick’s use of beeswax reflects an alarming decline: that of bee colonies. “Conceptually, we know that without bees we don’t have a lot of food,” he said. But the materiality of beeswax also has a less obvious significance in the exhibition. 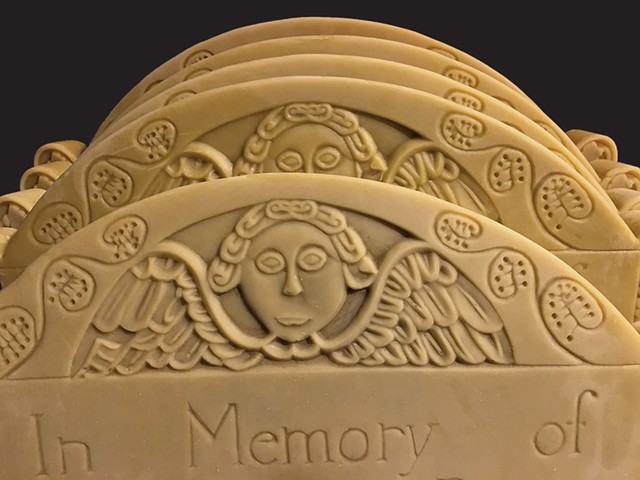 “Beeswax is inert,” Borthwick explained. “The material doesn’t deteriorate, it doesn’t degrade.” As long as the temperature does not exceed the melting point of 147 degrees Fahrenheit, these beeswax replicas will outlast his stone carvings. As evidence, Borthwick pointed out that stone structures fell victim to abrasive elements over time – and that the ancient Romans kept records on beeswax tabulae. Many of them remain intact to this day, he said, kept in museums in Rome.

The beeswax tablets also adorn “Objects of Empire” with a pleasant aroma and a warm, earthy color – a contrast to the cold white stone. The materiality of each component, including the reddish wood blocks, enhances the aesthetics of the others.

As an artist, Borthwick said, he has become more aware of the limited natural resources he uses. And in his sculpture classes at Colby College, where he taught for eight years, his students are now more likely to use reclaimed wood and leftover stone blocks, he said.

Borthwick plays the long game, so to speak, aware of the past and future of the earth-based materials he has used and loved for over 20 years. “It’s not trendy,” he said of the stone. “But I still believe that marble can still speak to people.”